Richard Fisher, MD, has devoted much of his professional life to improving orthopaedic care in health systems around the world. “You can improve the system by first understanding it,” explained Dr. Fisher. “You build the system, their system, together.”

Since his first overseas volunteer assignment in 1978, Dr. Fisher has been an active member of the international orthopaedic community. His early assignments included a trip to Bangladesh with CARE MEDICO. When the nonprofit Health Volunteers Overseas (HVO) was launched in 1986, evolving from the single-division Orthopaedics Overseas to an organization with multiple programs, including anesthesia and oral surgery, Dr. Fisher extended his international experience to several continents. “Once HVO started, it was easier to travel because of all the facilities they partnered with,” he said.

HVO seeks to improve global health through education, partnering with institutions in resource-scarce countries to address the education and training needs of their health workforces. As a volunteer with the organization, Dr. Fisher has traveled to Peru, Ghana, Sri Lanka, and Bhutan, working with orthopaedic surgeons and residents to enhance their clinical skills.

From 1990 to 1992, Dr. Fisher served as the in-country medical director for the HVO U.S. Agency for International Development (USAID)-funded project in Mozambique, where he assisted with training and establishing services for patients requiring prosthetic devices as the country recovered from war. He also contributed extensively to another USAID-funded project in Vietnam to upgrade rehabilitation services. As part of a technical advisory team, he contributed to the needs-assessment process and worked with a multidisciplinary team to organize multidisciplinary seminars for physicians, nurses, and rehabilitation professionals on topics such as trauma, post-amputation, spinal cord injury, and more.

Each of his experiences has reinforced the importance of understanding health systems—and the people within those health systems—to improve the quality and availability of orthopaedic care. “It doesn’t work to impose [your views] upon them,” advised Dr. Fisher. “You need to develop those relationships that (1) are really fun and wonderful and (2) really allow you to understand what problems they have and to try to help solve them.”

Dr. Fisher continued his international volunteer service at the Jigme Dorji Wangchuck National Referral Hospital in Thimphu, Bhutan, in 1998. “When HVO first started working in Bhutan, there was no orthopaedist there. There was one person, Sonam Dorji, MBBS, who was trained as a general surgeon,” recalled Dr. Fisher. “He enjoyed orthopaedics, but he wanted help.”

A longtime HVO volunteer, Robert Stein, MD, worked with Dr. Dorji to demonstrate the need for an orthopaedics training project. Together with the National Referral Hospital and the Bhutan Ministry of Health, they laid the foundation for expanded orthopaedics training and started the HVO project in 1991. Dr. Stein served as director of the project for nearly two decades. “They were able to convince the government that they could use orthopaedic volunteers not only to cover some of the problems but to help solve them,” noted Dr. Fisher.

With his initial visit in 1998, Dr. Fisher joined a long line of volunteers working to address the need for trained orthopaedic care providers. “It was a wonderful experience,” Dr. Fisher said. “We had a great time.”

Dr. Fisher returned to the project site in Thimphu in 2009. “By the time we went back, there were lots of changes,” he explained. “There was an HVO member there almost every month for those 11 years. And [Dr. Dorji] was a very good orthopaedist.” 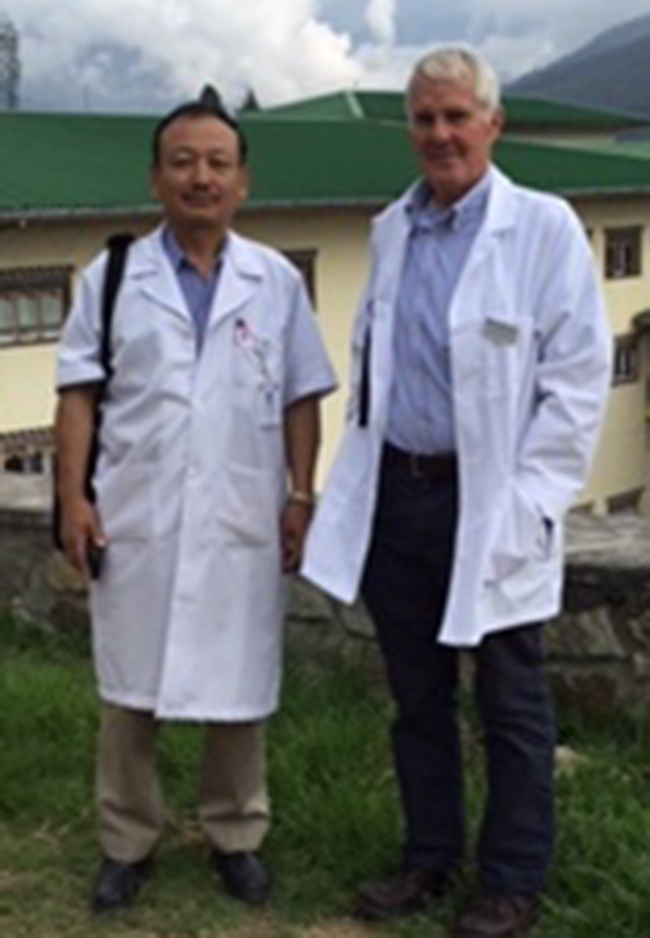 Dr. Sonam Dorji (left) stands with Richard Fisher, MD. According to Dr. Fisher, Dr. Robert Stein worked with Dr. Dorji to demonstrate the need for an orthopaedics-training project. Together, with the National Referral Hospital and the Bhutan Ministry of Health, they laid the foundation for expanded orthopaedics training and started the Health Volunteers Overseas project in 1991.
Courtesy of Health Volunteers Overseas

The orthopaedics department at National Referral Hospital had also expanded its staff. Two physicians had completed their orthopaedic residency training in Thailand, and the department had launched an orthopaedic technician training project in partnership with HVO.

“By that time, they were training the orthopaedic technicians, which is sort of a nurse equivalent,” described Dr. Fisher. “The techs were trained to do basics. They assisted in surgery. They could close wounds. They could débride open fractures. They could splint, cast, [and] care for inpatients, and so on.”

Dr. Fisher returned five times from 2009 to 2017, working with orthopaedic technician groups. “That training really made a difference for Bhutan,” noted Dr. Fisher. “By 2015, they had 21 or 22 of these [technicians], and they were placed in small medical centers all over the country.”

Dr. Fisher noted that this placement was essential in Bhutan—a mountainous country that required two or three days of difficult travel to reach the rural areas from the capital city. “It was a really bad trip for people who were injured, so the [technicians] were providing orthopaedic care and stabilizing people who needed to transfer [to Thimphu],” explained Dr. Fisher. “It was a really good program that HVO was behind, providing the training and vision to keep that going and make it work.”

By 2015, the orthopaedics department at the National Referral Hospital began exploring the launch of a residency training program. “They [had been] sending everybody to Thailand for training,” noted Dr. Fisher. The cost of sending professionals to Thailand for training was covered by the Bhutanese government. Trainees did return to Bhutan, but the expense and requirement to travel hindered the number of individuals who could receive the training.

“The first resident came [to National Referral Hospital] in 2017 to start the residency training program,” he said. “That was a big jump forward.”

The orthopaedics department at the National Referral Hospital now has nine orthopaedic physicians, and work continues to expand and support their new residency training project. Dr. Fisher continues to support the department with occasional visits and through HVO’s recently expanded e-volunteer project. He works from afar to develop and share PowerPoint presentations and exam questions that cover the main topics of their new resident training curriculum.

Dr. Fisher noted that his continued work with the site, even from afar, has been possible because of the personal connections he has cultivated as an onsite volunteer. “Interpersonal collaboration is really, absolutely the whole thing,” explained Dr. Fisher. “It’s that person-to-person relationship that makes the whole thing work.”

Dr. Fisher is on the board of HVO. In addition, he is a member of the World Health Organization (WHO) Expert Panel for Clinical Technology, a participant in the WHO Global Initiative for Emergency and Essential Surgical Care, and coeditor of the WHO publication Surgical Care at the District Hospital.

Katie McMullen is communications and development coordinator for HVO. She can be reached at k.mcmullen@hvousa.org.