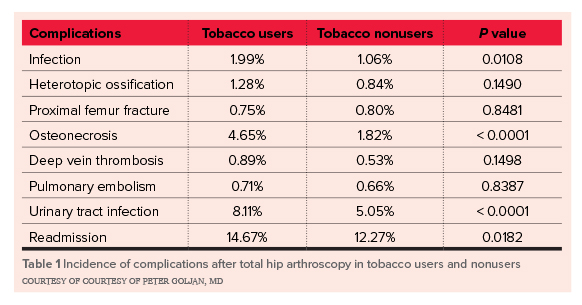 Tobacco use is associated with significantly increased rates of surgical and medical complications within six months after hip arthroscopy, according to a study presented by Peter Goljan, MD, an orthopaedic surgery resident at Seton Hall University, as part of the Annual Meeting Virtual Experience. “Surgeons should counsel patients preoperatively to reduce these risks,” the researchers concluded.

“Although the effects of tobacco and nicotine have been studied at length in many other orthopaedic conditions, there is a relative paucity of data pertaining to tobacco and the risks it might have for someone undergoing hip arthroscopy,” Dr. Goljan told AAOS Now. “As physicians, we are constantly educating our patients and answering health-related questions. Thus, with the principal of propagating evidence-based medicine, we wanted to specifically study the effects tobacco use has on hip arthroscopy patients and expand the knowledge base within the field.” 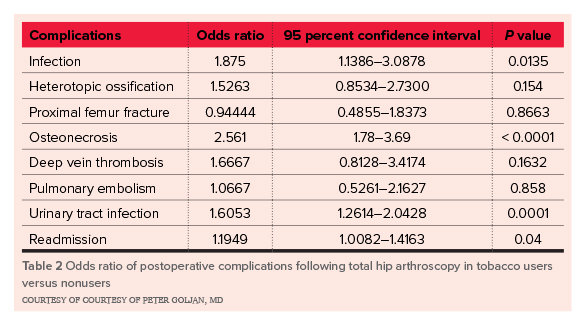 Researchers retrospectively reviewed the Medicare Standard Analytic Files and used CPT codes to identify patients who underwent hip arthroscopy between 2005 and 2014. Patients were then classified as tobacco users or nonusers via ICD-9 codes.

A total of 4,514 age- and gender-matched patients were identified. The average Charlson Comorbidity Index was 3.81 for the tobacco cohort and 3.40 for the nontobacco cohort (P < 0.001).

Complications were more common among tobacco users. In the tobacco cohort, 5 percent of patients developed osteonecrosis, 8 percent developed UTI, and 15 percent required hospital readmission (Table 1). “Tobacco users had 2.5- and 1.9-times greater odds of developing osteonecrosis or a surgical site infection, respectively, compared to the control cohort,” Dr. Goljan said. “The fact that tobacco users had 2.5 greater odds of developing osteonecrosis was alarming. Osteonecrosis is a devastating complication from an elective procedure, and we were surprised by how strongly this condition was linked to tobacco use.”

The study is limited by its retrospective design.