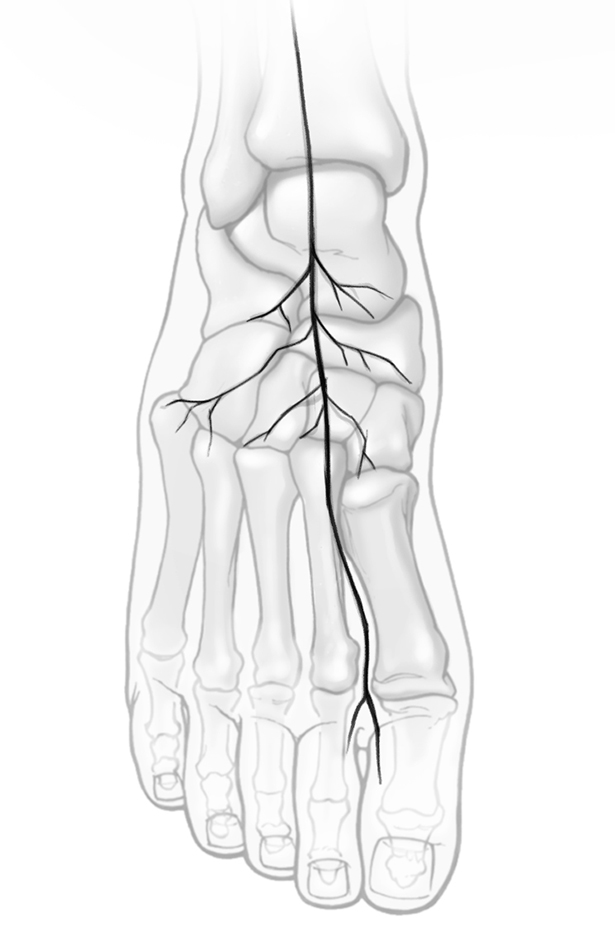 Fig. 1 Dorsal capsular innervation of the midfoot by the deep peroneal nerve. Note that the fourth and fifth tarsometatarsal joint innervation was inconsistent.
Courtesy of Mayo Clinic

Patients with midfoot arthritis experienced a significant improvement in pain and function after deep peroneal neurectomy, according to a study presented by Glenn G. Shi, MD, of Mayo Clinic in Florida, as part of the Annual Meeting Virtual Experience.

After the intervention, the mean visual analog score (VAS) for pain improved from 7.4 ± 1.9 to 1.9 ± 1.9 at three months and 1.4 ± 1.9 at six months (P < 0.001). Six patients reported being pain free (VAS = 0) at three months. All subscales of the Foot and Ankle Outcome Score showed significant improvement at both three and six months. The mean total score on the 36-item Short Form Survey improved from 51.4 ± 17.9 to 72.5 ± 7.6 and 74.5 ± 7.5 at three and six months, respectively (P <0.001). No patients required return to the OR for conversion to arthrodesis. Complications included one patient with delayed wound healing and another patient with inadequate pain relief. One patient experienced relief of dorsal midfoot pain but developed noticeable numbness in the first web space.

“Midfoot arthritis can result in debilitating pain, affecting 12 percent of adults over 50 [years],” Dr. Shi told AAOS Now. “Generally, after failing nonoperative management, selective arthrodesis is the only surgical option for end-stage arthritic midfoot. Long postoperative immobilization and up to 17 percent complication rate associated with arthrodesis were main drivers for me to look elsewhere for a solution to pain.”

He said that, in patients with painful midfoot arthritis without radiographic collapse or neuropathy who cannot tolerate midfoot arthrodesis (extensive surgery, recovery, risks, or immobilization), deep peroneal neurectomy can help with the dorsal-sided midfoot pain. “Early results indicate that this procedure is both safe and effective.”

Dr. Shi observed, “This study was only possible after defining the joint capsular innervation of the deep peroneal nerve (Fig. 1). Our hand colleagues have demonstrated acceptable results in wrist denervation for arthritis. We are very interested in the long-term outcomes for the midfoot. We are continuing our follow-up of patients currently, with some of them reaching two years. We are following closely on radiographic outcomes as well. One of the interesting initial concerns that I had was whether this would produce neuroarthropathic joints. So far, this is not happening, although arthritis itself is advancing, as I had expected, over years. This makes sense, as the midfoot is innervated by several major nerves in the region, all patients have plantar protective sensation, and the deep peroneal nerve has limited disruption of cutaneous protective innervation. Additionally, we know from our orthopaedic forefathers that neuroarthropathy is a destructive process involving more than just nerve pathology.”

A limitation of the study is its retrospective nature. Also, “Selection bias could not be avoided,” Dr. Shi said. “Patients were not followed at six months with weight-bearing radiographs, which may reveal advancement of arthritis. Unless patients reported continuation of pain or worsening of pain, we did not routinely obtain weight-bearing radiographs at the six-month follow-up. Our follow-up is considered short term. We have seen from the wrist denervation series that full improvement does not plateau until greater than 12 months. Long-term outcomes need to be reported in the future to follow recurrence of pain, neuroma formation, neuroarthropathy development, and rate of arthritis progression.”

Dr. Shi and his coauthors concluded: “Deep peroneal neurectomy for dorsal midfoot denervation is a safe and effective alternative to arthrodesis for management of chronic midfoot pain, showing significant improvements in both pain and functional outcomes at early follow-up. Our study demonstrated clinical and functional outcomes similar to those previously reported for arthrodesis yet with the advantages of earlier postoperative weight bearing and lower complication rate.”

Dr. Shi’s coauthors of “Early Outcomes Following Dorsal Denervation of the Midfoot for Management of Chronic Pain” are Arun Kumar, MD; Meredith A. Williams, PAC; Benjamin K. Wilke, MD; Joseph L. Whalen, MD; and Jonathan Kraus, MD. The abstract and slide presentation for the paper (#175) can be viewed at https://aaos.scientificposters.com/index.cfm?k=q44hzbvq6y.