Following pediatric spinal deformity surgery, surgical site infections (SSIs) are a significant problem that can lead to patient morbidity and social and economic costs for patients, families, and the healthcare system. The spine team at Rainbow Babies and Children’s Hospital in Cleveland, implemented a comprehensive, standardized, hospital-wide infection-reduction bundle and observed a statistically significant decrease in the overall rate of SSIs in a pediatric population. R. Justin Mistovich, MD, MBA, an associate professor of pediatric orthopaedic surgery at Case Western Reserve University, presented the study’s findings as part of the Annual Meeting Virtual Experience. 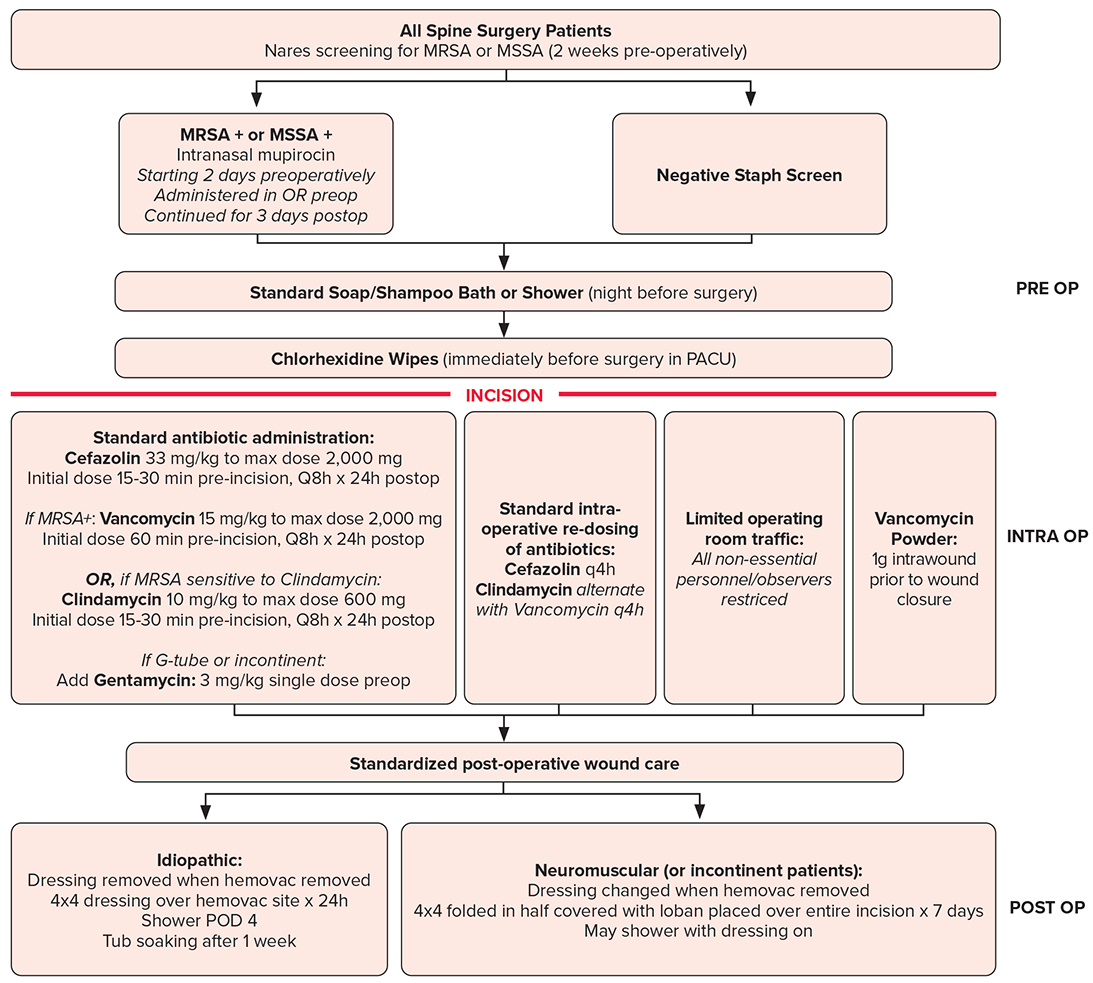 Researchers conducted a retrospective review of primary scoliosis surgeries at their facility between 1999 and 2017. In 2008, the group implemented a comprehensive, standardized infection-reduction bundle with interventions that included (Fig. 1):

In 2011, the researchers updated the bundle to include intrawound vancomycin powder at the time of wound closure.

Eligible consecutive patients (n = 804) were aged 21 years or younger; had a diagnosis of idiopathic, neuromuscular, syndromic, or congenital scoliosis; had a primary posterior spinal fusion or same-day anterior and posterior spine fusion with segmental spinal instrumentation of six levels or more; and had postoperative follow-up for a minimum of one year. Patients with kyphosis, staged anterior and posterior procedures, growing rod procedures, or instrumentation of five levels or fewer were excluded.

Mean time to early infection was 18.9 days in the pre-bundle group and 18.2 days in the post-bundle cohort. Mean times to late infection were 4.1 years and 2.0 years, respectively. Six patients in the pre-bundle group and three in the post-bundle cohort developed urinary tract infections. Twenty-three and seven patients, respectively, developed postoperative respiratory complications.

“A methodical, standardized approach to SSI reduction is important in pediatric spinal deformity surgery and likely applicable to the entirety of our field,” Dr. Mistovich said. “It is challenging to get good data on individual interventions that may lower SSIs. We hope this study can serve as groundwork for larger multicenter studies.”

After implementation of the bundle, researchers observed a trend toward decreased early infections, but it was not statistically significant (P = 0.14). The researchers reported that no early infections occurred in any primary scoliosis cases between November 2015 and May 2019.

The study is limited by its single-center patient pool, the fact that the bundle enacted several changes at one time, and the retrospective methodology. “We acknowledge that the bundle did not test individual measures, but rather evaluated changes as a whole when quantifying reduction in infection rates,” the authors wrote. “Further studies are needed to identify the benefits of individual preventative strategies added to infection-reduction bundles, as well as any potential additive or synergistic benefit by combining several interventions.”