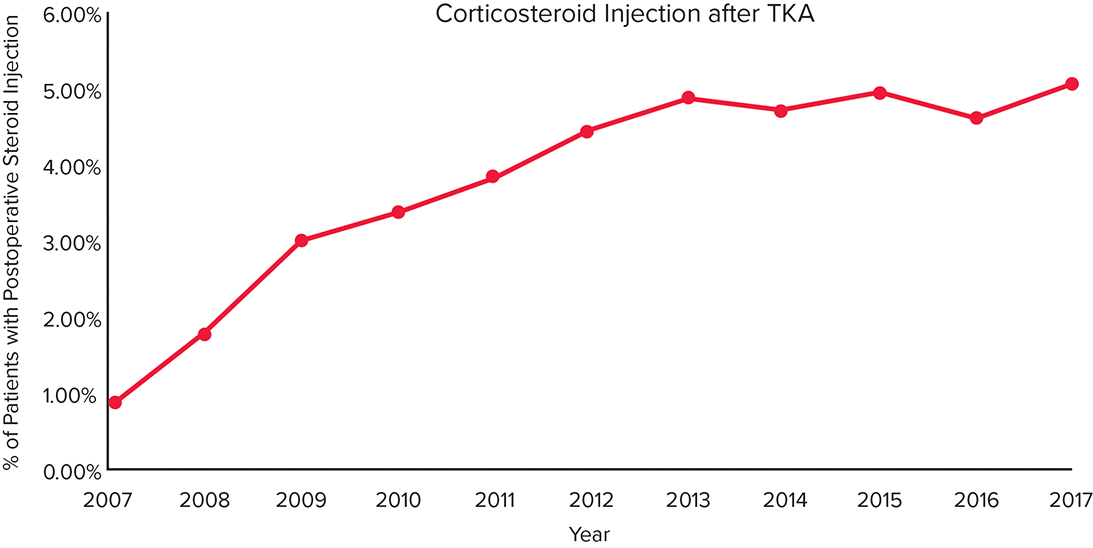 Fig. 1 Trend of corticosteroid injections after total knee arthroplasty (TKA) nationally from 2007 to 2017; there was a significant increase in the percentage of injected TKAs, rising more than 500 percent (P < 0.001).
The Journal of Arthroplasty

A study evaluated the risk of acute infection among patients who received intra-articular corticosteroid injection into a preexisting total knee arthroplasty (TKA). According to the researchers, patients who received an injection had a significantly greater risk of periprosthetic joint infection (PJI) versus patients who did not receive an injection. The findings of the study were presented by Nicole D. Quinlan, MD, MS, as part of the Annual Meeting Virtual Experience.

“It is widely accepted that PJI risks increase significantly if corticosteroid injections are performed preoperatively within three months of the procedure; however, the risk of infection is much less widely studied when these injections are performed postoperatively,” Dr. Quinlan told AAOS Now. “Most single-institution studies provide conflicting data, and no large-scale study exists. A previous study published by Kew et al., in 2019 investigated the risks of periprosthetic infection following corticosteroid injection after total shoulder arthroplasty and found an increased risk of infection if the injection was performed within one month of the arthroplasty procedure. We sought to find out if similar increased risks existed with postoperative injection following TKA as well.”

The study authors queried the Humana dataset for TKA patients treated between 2007 and 2017. Patients who received an ipsilateral knee corticosteroid injection in the postoperative period were matched 2:1 to noninjection controls. Between-group comparisons were made for infection diagnoses six months to one year following an injection and an ipsilateral procedure for infection at any postoperative time point.

The increased infection risk for injection patients was in line with what the researchers hypothesized, although Dr. Quinlan said they were “somewhat surprised” that the overall rate of postoperative injections has increased overtime, considering the accumulating data associating the practice with infections.

Dr. Quinlan recommended that physicians use caution when giving existing TKA patients a corticosteroid injection. She also said that patients should be educated on the risks and have an understanding of the significant consequences associated with infection.

The study is limited by its retrospective design, so the authors could not establish infection etiology. Additionally, the dataset may not be representative of the whole population. Lastly, the researchers were unable to control for confounding factors.