The use of computer-aided surgery (CAS) in total knee arthroplasty (TKA) has been associated with positive outcomes. However, most manufacturer-provided preoperative plans associated with CAS-based surgeries require revisions, which could take as long as eight minutes. The use of artificial intelligence (AI) could help surgeons cut down on that time. A recent study compared default versus AI-based preoperative TKA plans. The researchers found that the AI-based plans significantly outperformed the default plans. The results of the study were presented as part of the Annual Meeting Virtual Experience.

“In the past two years, we are starting to see the first successful applications of AI in health care to aid physicians with their daily tasks,” Adriaan Lambrechts, of Materialise NV, a PhD student at KU Leuven, told AAOS Now. “Currently, AI has surpassed expert radiologists in detecting breast tumors in mammography scans and eye diseases from optical topography scans. However, the field of orthopaedics has been lagging on adopting AI. Therefore, we formulated a research project around it: How can AI help orthopaedic surgeons in their daily practice, starting with the most commonly performed procedure—TKA?” 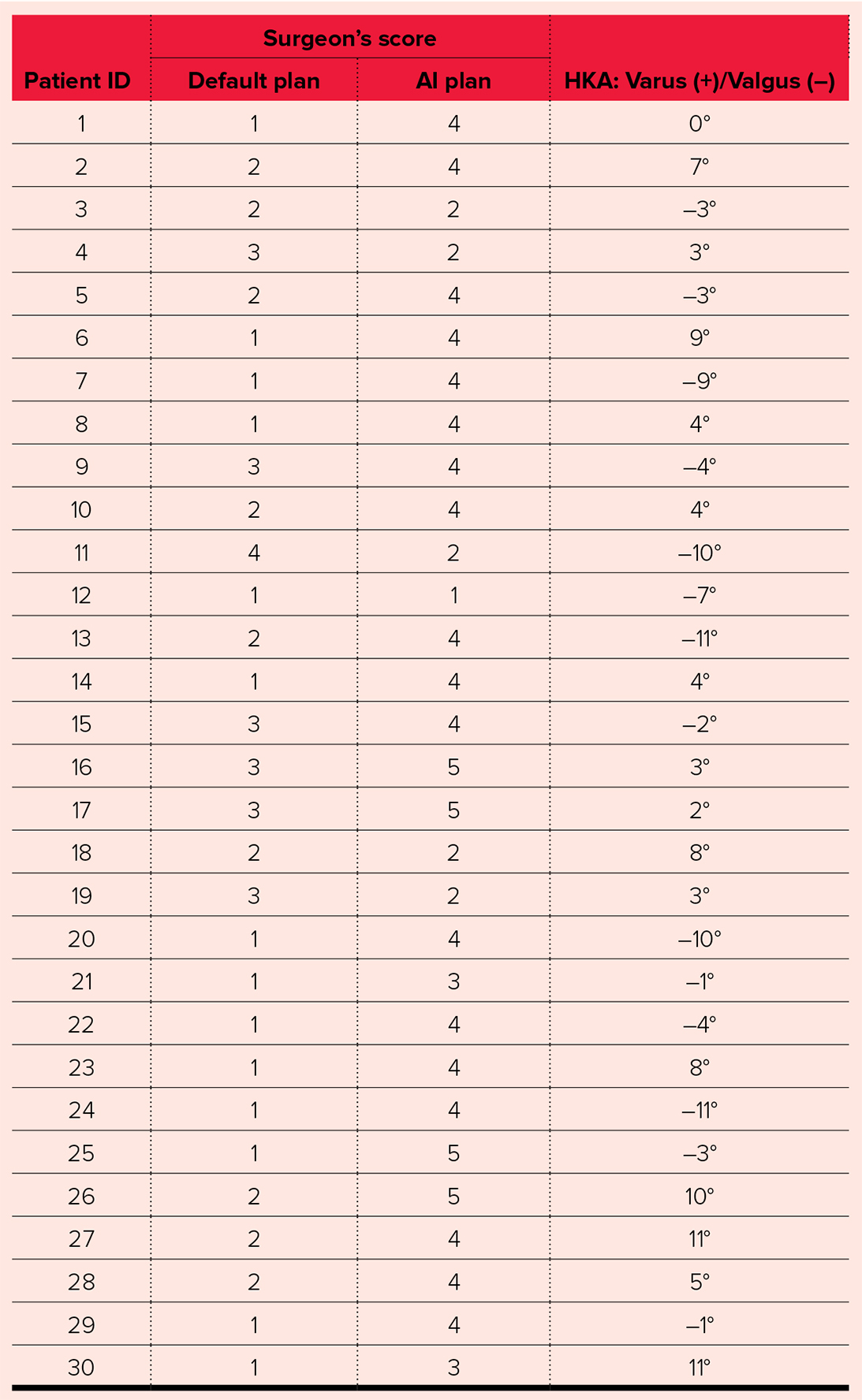 To answer this question, the researchers conducted a randomized, blinded validation trial. They identified 30 retrospective cases that had the manufacturer’s default and AI-based plans available. A surgeon viewed both preoperative plans—blinded—and scored each on a five-point scale, with one indicating totally unacceptable and five indicating no changes required.

The authors noted that another option to compare the plans would have been to count how many changes each plan required; the researchers decided against using that method as a measurement because to implement one change could cause a chain reaction of numerous other changes.

“For example, some femurs fall between two implant sizes. If in such case, a surgeon selects a smaller implant size, the flexion/extension angle of the implant as well as the posterior resection might also needs to be changed to avoid notching. As a result, even in case two preoperative plans with different implant sizes could be almost equally good, there would be a large difference in the number of changes that the surgeon would need to make to go from one plan to the other,” they explained. “For this reason, we consider this alternative objective measure less preferred.”

Dr. Lambrechts further elaborated on why objective measures are less than ideal: “The translational and rotational degrees of freedom for implant placement interact to result in a stable joint. Therefore, cohesion among planning parameters is very important. That is very hard to capture in an objective measure.”

“We tested our algorithm on a set of cases with large variation of joint deformity from 11 degrees varus to 11 degrees valgus. Before our study, I still had doubt about the performance of the model on cases with large deformities, as these occur more rarely and are more difficult for the model to predict,” Dr. Lambrechts said. “However, to our surprise, even for these cases, the model worked well, and we could not observe a significant relation between the joint deformity and surgeon’s score.”

“The main takeaway of our study is that we were able to prove our hypothesis that AI can generate significantly better preoperative plans compared to current default plans provided to the surgeon by capturing the surgeon’s preferences and applying them in a patient-specific manner,” he said. “This will reduce the time and effort needed by the surgeon to plan his or her cases for patient-specific instrumentation, navigation, or robotic-based TKA surgery.”

A limitation of the study is that, at the time the data were submitted, the algorithm had been validated by only one surgeon. Since then, two additional surgeons have validated AI-based algorithms and found them to be superior. According to Dr. Lambrechts, “From our continuation of the AI-based planning validation study, we measured an average reduction in the surgeon’s planning time of about 80 percent compared to manufacturer’s default preoperative plans.”