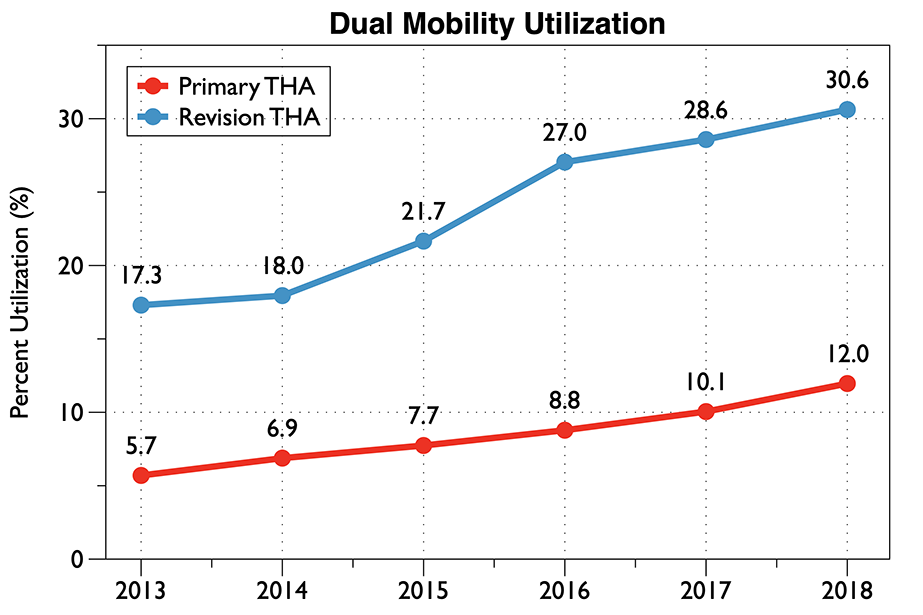 Fig. 1 Dual mobility utilization from 2013 through 2018, which showed a year-over-year increase for primary and revision total hip arthroplasty during the period examined
Courtesy of Nathanael Heckmann, MD

Study Details Increase in Dual Mobility Implant Use in THA

A study analyzing data from the American Joint Replacement Registry (AJRR) and describing utilization trends of dual mobility (DM) articulations in the United States for primary and revision total hip arthroplasty (THA) found that DM utilization increased year over year during the study period across all age groups. In the final year of analysis, approximately 30 percent of revision THAs and 12 percent of primary THAs used a DM implant. Nathanael Heckmann, MD, of the Keck School of Medicine of the University Southern California, presented the data as part of the Annual Meeting Virtual Experience.

The study group consisted of all patients with data submitted to AJRR who underwent a primary or revision THA between 2012 and 2018 and had bearing surface data. AJRR has been collecting component information since its inception. As reported in the 2019 AJRR Annual Report, completeness of selected attributes ranges from 57 percent to 99 percent. Patients without implant information were excluded. Patient characteristics, including age and sex, were recorded for each patient. Hospital size and academic affiliation were classified as major teaching institution, minor teaching institution, or nonteaching institution.

When assessing DM utilization by age, the researchers found an increase in usage across all age groups during the study period (Fig. 2). Patients younger than 50 years showed the highest rates of DM utilization, increasing from 8.8 percent of primary THAs in 2013 to 13.7 percent in 2018. Patients 80 years or older received DM implants at the second highest rate, increasing from 5.9 percent of cases in 2013 to 12.5 percent in 2018.

Fig. 1 Dual mobility utilization from 2013 through 2018, which showed a year-over-year increase for primary and revision total hip arthroplasty during the period examined
Courtesy of Nathanael Heckmann, MD 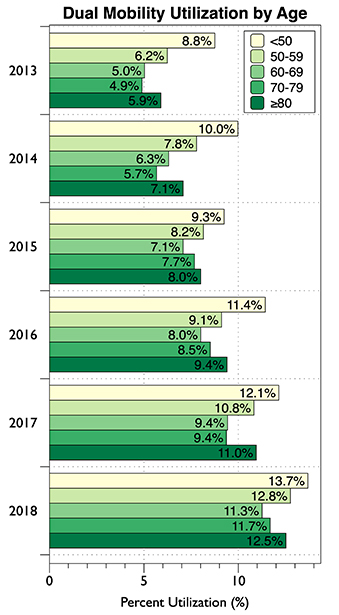 Fig. 2 Dual mobility utilization by age group from 2013 through 2018; in every year assessed, patients younger than 50 years showed the highest rate of dual mobility utilization. (Note: Data from 2012 were not graphed due to the low number of cases and contributing institutions.)
Courtesy of Nathanael Heckmann, MD

Dr. Heckmann told AAOS Now that an unexpected and even “alarming” finding is that DM implants are being used most frequently in patients younger than 50 years, accounting for approximately 14 percent of primary THAs in that age group in the final year of analysis. “This is of particular concern, as the long-term performance of these implants has not been well described,” he said.

A main takeaway of the study, he said, is that further research regarding the implants is required. In particular, Dr. Heckmann said, “More research is needed to identify which patients stand to benefit the most from these implants. More importantly, further research is required to better understand the long-term implications of the trends identified in the current study.”

He noted that as with all database studies, the retrospective nature is the biggest limitation. “We are unable to account for specific patient and surgeon factors that lead to DM utilization on an individual level,” he said. “As such, we are unable to account for potential confounding factors. Nevertheless, the limitations do not change the major findings of this study—namely, that DM utilization is increasing, and this increase is happening most in the youngest patients.”