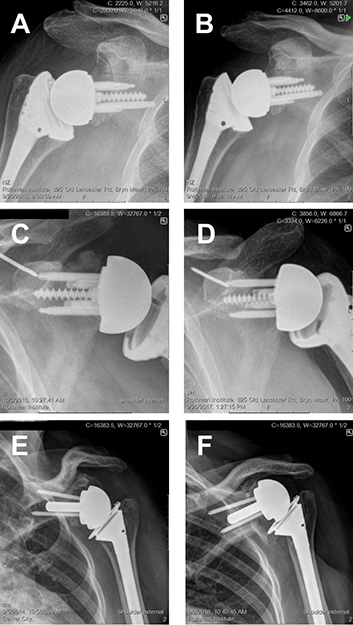 Reverse total shoulder arthroplasty (RTSA) with structural bone grafting for glenoid bone loss improved range of motion and function, but researchers observed a larger than previously reported rate of radiographic baseplate loosening in the early postoperative period. Jason C. Ho, MD, of the Department of Orthopaedic Surgery at Cleveland Clinic, presented the findings of the study, which was performed at Rothman Orthopaedic Institute and Thomas Jefferson University Hospitals in Philadelphia, as part of the Annual Meeting Virtual Experience.

“We noticed in our practice that we were having a higher than anticipated number of early radiographic failures of RTSA with glenoid bone grafting, [but] the literature seemed to indicate that failures were rare,” Dr. Ho told AAOS Now. “We found a higher than previously reported rate of radiographic failures, defined as a shift in the baseplate from initial postoperative X-rays, and many of these were within the first year after surgery.”

“We feel this study lends merit to the orthopaedic literature cautioning against blind, widespread use of a specific technique, but rather encourages surgeons to think critically on which patient may benefit and in what scenario,” Dr. Ho continued.

Researchers retrospectively identified 44 cases of RTSA (mean age at surgery, 74 years; 61 percent were female; seven revision RTSAs and 37 primary RTSAs) with structural bone grafting for glenoid bone loss performed at their institution between September 2010 and January 2017. Eligible patients had a minimum of one-year radiographic and clinical follow-up. All patients had structural bone grafting of the glenoid and fixation using only the baseplate and its screws. Humeral head autograft was used in primary RTSA, and bulk allograft or iliac crest autograft was used in revision RTSA cases. Researchers assessed radiographs preoperatively, at three months postoperatively, and at a minimum of one year later.

Radiographic baseplate failure was not associated with age, gender, graft type, or revision surgery but was associated with radiographic signs of graft resorption (P = 0.002) and worse SANE scores (55 versus 80; P = 0.01) at final follow-up.

Baseplate failure was associated with larger glenoid version correction (11 degrees anteversion correction versus 0 degrees; P = 0.02) at time of surgery. There was no statistical difference between groups whether the baseplate was placed on native bone, nor related to the amount of the central peg/screw in native bone. For revision cases, there was a 50 percent (n = 4/8) radiographic failure rate and a 25 percent (n = 2/8) revision surgery rate for baseplate failure, with an overall revision RTSA rate of 38 percent (n = 3/8).

“We think there is still a role for glenoid bone grafting, as many of these patients had good outcomes, but there may be alternatives to address certain glenoid defects, and we should critically look at those options to see if there is truly one that is superior and in which scenarios,” said Dr. Ho.

The study is limited by its small sample size, as well as heterogeneity in implant design and bone grafting technique. In addition, the researchers did not have preoperative CT scans for many of the patients, thus limiting the uniformity and amount of preoperative deformity data.