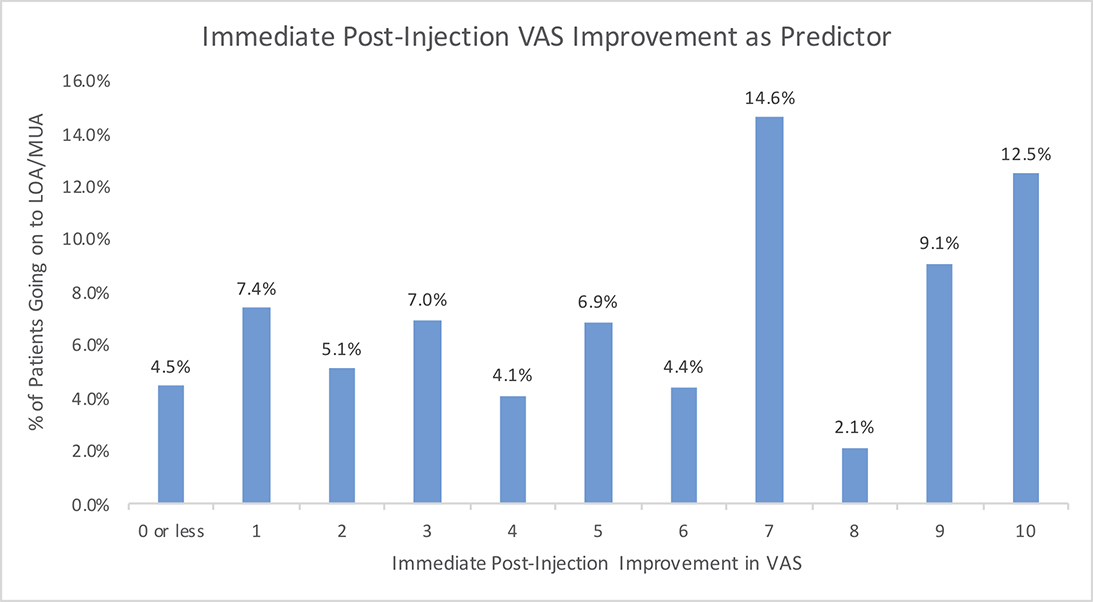 Immediate relief of pain after a fluoroscopic-guided glenohumeral injection for idiopathic adhesive capsulitis of the shoulder is not predictive of eventual need for manipulation under anesthesia (MUA) and/or lysis of adhesions (LOA), according to a study that was presented by Brian C. Werner, MD, an assistant professor of orthopaedic surgery at the University of Virginia Health System, as part of the Annual Meeting Virtual Experience.

“Anecdotally, we felt that patients who had a good immediate anesthetic response to a steroid injection for adhesive capsulitis did better than those who didn’t,” Dr. Werner told AAOS Now. “[But] the study actually disproved our hypothesis. … We were surprised by this finding.”

This single-institution, multisurgeon, retrospective study included 797 patients (mean age, 56 years; 68 percent were female) who underwent fluoroscopic corticosteroid injections for a diagnosis of idiopathic adhesive capsulitis between 2010 and 2017. Evaluable patients were a minimum of one year after injection and had immediate pre- and post-injection visual analog scale (VAS) pain scores. The researchers excluded patients with prior ipsilateral shoulder surgery or a diagnosis of concomitant glenohumeral osteoarthritis.

The main outcome measure was ipsilateral LOA/MUA within one year after injection. Researchers calculated immediate pain reduction after injection by subtracting the post-injection VAS score from the pre-injection score.

“For all three predictors, the area under the curve of the receiver operating characteristic analysis ranged from 0.506 [to] 0.550, classifying them as extremely poor discriminators of the outcome of interest,” the authors noted.

“Patients can be counseled that even if their initial response to an injection is poor, they still have an excellent chance of avoiding surgery, as the overall rate of LOA/MUA was quite low,” Dr. Werner concluded.

The study is limited by its retrospective, single-institution design. The authors also could not standardize how much and what type of physical therapy patients received.