Regional anesthesia was associated with reduced length of stay (LOS) and lower risk of readmissions and complications following total hip arthroplasty (THA) compared to general anesthesia, according to a study presented by Andrew Judge, MSc, PhD, as part of the Annual Meeting Virtual Experience.

The study involved 353,387 patients undergoing primary THA between 2008 and 2017. Data were extracted from the National Joint Registry (NJR) for England, Wales, Northern Ireland, and the Isle of Man, which was linked to English Hospital Episode Statistics (providing information on all inpatient episodes). Patients were grouped as having regional anesthesia (spinal anesthesia with or without sedation and with or without nerve block; n = 246,605, 70 percent) or general anesthesia (with or without nerve block; n = 106,782, 30 percent). Outcomes of interest were hospital LOS and complications within 90 days of surgery. Complications included reoperation, readmission, stroke, infection (chest, urine, and surgical site), myocardial infarction, venous thromboembolism (VTE), acute renal failure, blood transfusion, major hemorrhage, anemia, and mortality.

“Although we observed that regional anesthesia was associated with better health-related quality of life and better pain and functional outcomes, these were statically significant differences that did not reach levels of clinically important differences,” Dr. Judge, a professor of translational statistics at the University of Bristol in Bristol, United Kingdom, told AAOS Now.

He said the findings largely mirrored those of smaller studies. “Although unlike others, we observed no difference in 90-day mortality,” he said. 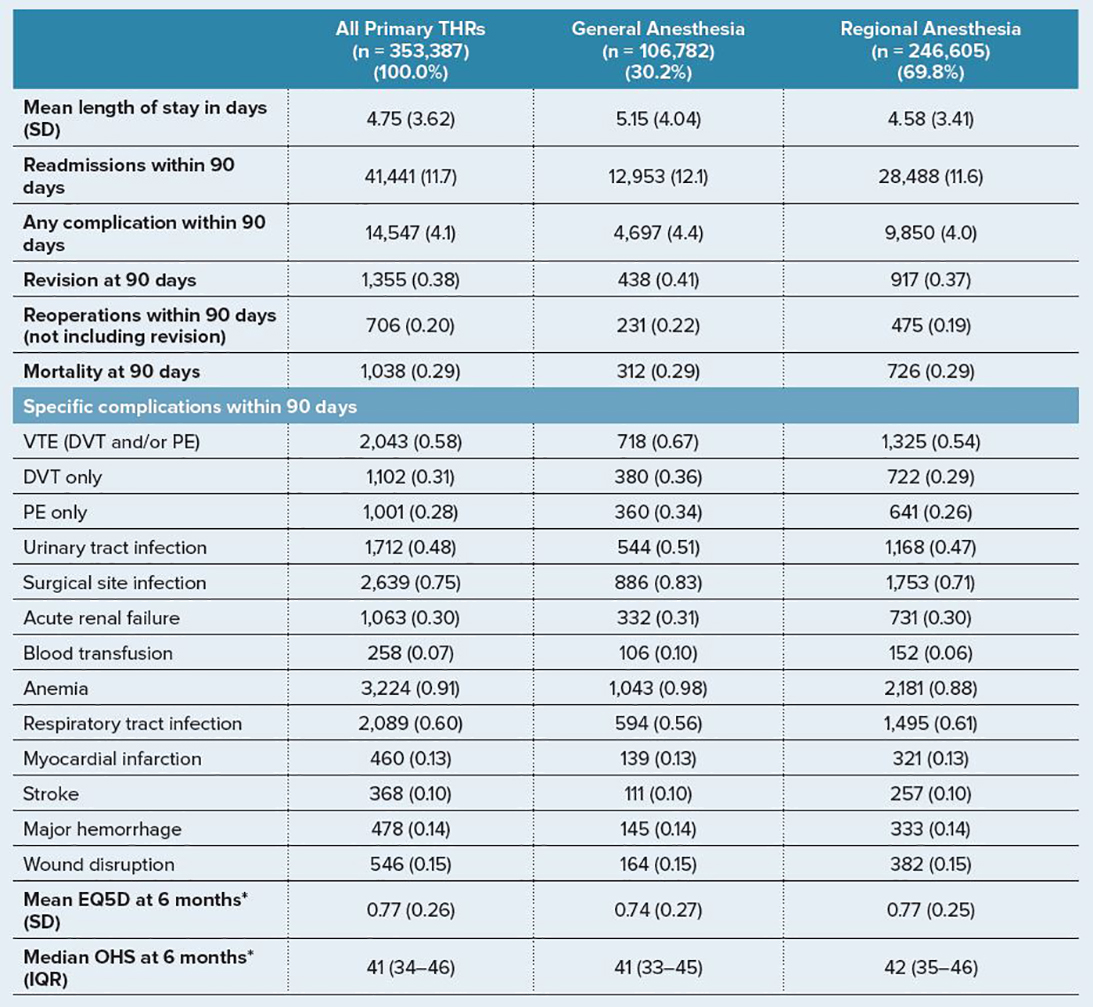 The authors noted that because the absolute risk of complications following THA is rare, randomized, controlled trials comparing anesthetic types “would need very large numbers for assessing serious adverse events such as mortality and cardiorespiratory complications, and these trials may not be feasible.” They wrote that observational studies have been criticized because they have relatively small cohorts (fewer than 20,000 patients); they are limited by the information available; they do not report relevant outcomes, particularly patient-reported outcomes; and some report morbidity only during hospital admission, thus not capturing events after discharge. “There is therefore the need to examine the effects of regional anesthesia versus general anesthesia in terms of morbidity and mortality following THA in a large patient cohort with sufficiently granular data in order to overcome these limitations,” they wrote.

The authors noted that in the British health system, there has been a secular increase in regional anesthesia use for joint replacement since 2008, with 77 percent of patients now receiving regional anesthesia. The observations likely reflect changes in clinical practice during that time. Between 2009 and 2011, the Department of Health in England introduced the Enhanced Recovery Partnership Programme, which promotes the use of regional anesthesia. More recently, they observed there have been attempts to perform THA as a day-case surgery, with regional anesthesia used in such cases in a number of countries, given that it is considered an important factor in reducing hospital stay and morbidity.

“Our observations support the notion that regional anesthesia has a number of advantages for patients undergoing THA in terms of LOS, readmissions, and complications,” they wrote. “Given these findings, we recommend that all anesthetists involved in joint-replacement surgery should be capable of performing regional anesthesia, as it is recognized to be more technically demanding and time consuming than general anesthesia, which has contributed to some of the resistance for using regional anesthesia in certain regions.”

Dr. Judge observed, “There is a need to understand barriers and facilitators to anesthetists involved in joint-replacement surgery performing regional anesthesia. It would also be beneficial to explore the effect of adding a nerve block to both anesthetic techniques.”

Addressing limitations, he said, “Using observational data means causality cannot be inferred. Registry data do not include information regarding the dose and specific drugs used during anesthesia. Missing data on body mass index (BMI) is a limitation of NJR studies, but the distribution of BMI was balanced between both anesthesia groups. Adjusting for BMI as a confounder in a sensitivity analysis did not change the study’s findings.”