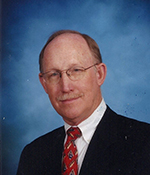 Dr. Scutchfield was recognized for his outstanding leadership and service, in both volunteer and professional capacities, to the orthopaedic community. Over the years, he has worked hard—within AAOS as well as through state and local orthopaedic organizations and societies—to develop and advance initiatives that enhance the orthopaedic profession and improve patient care.

David D. Teuscher, MD, FAAOS, a past president of AAOS, called Dr. Scutchfield “the perfect ambassador for the ‘House of Orthopaedics.’”

Dr. Teuscher continued, “Excellence can have many arenas, and [Dr. Scutchfield’s] leadership torch has been passed countless times to those of his and the next generation, to the benefit of all whom he has touched, as well as our noble profession.”

James D. Heckman, MD, FAAOS, also an AAOS past president, agreed: “I have known and worked closely with [Dr. Scutchfield] for many years, and I can personally attest to his exceptional service to AAOS, his patients, and the orthopaedic community. I cannot think of anyone more deserving of this award.”

A leader on many fronts

Dr. Scutchfield’s leadership efforts began early in his professional career. Shortly after starting in private practice in 1980, he was elected to the Kentucky Medical Association Board of Trustees and soon after was named vice chair. In 1990, he was elected president of the Kentucky Orthopaedic Association. Under his tenure, the organization significantly improved its programming and substantially increased its membership.

As a member of the AAOS Board of Directors (BoD) and chair of the Board of Councilors in the 1990s, Dr. Scutchfield was instrumental in the development of the Communications Cabinet and the Communications Skills Mentoring Program. The program was designed to improve communication between surgeons and patients as well emphasize culturally competent care. Although the program is no longer active, its materials are available to AAOS members online.

During his time on the AAOS BoD, he was a leader in the formation of the American Association of Orthopaedic Surgeons as an advocacy organization and the creation of the Orthopaedic Political Action Committee, which is the only national political action committee in Washington, D.C., dedicated solely to representing orthopaedic surgeons before Congress. Dr. Scutchfield’s interest in advocacy also led him to take a sabbatical from his practice mid-career to serve in Washington, D.C., as legislative associate for health affairs for his local congressman. In that role, he worked alongside the Robert Wood Johnson fellows and the AAOS Office of Government Relations to help encourage the formation of the Academy’s Health Policy Fellowship Program.

“Thirty years ago, the priority of advocacy was not on the AAOS radar, but it is today thanks to pioneers like Dr. Scutchfield,” Dr. Teuscher said.

Dr. Scutchfield’s additional volunteer positions with AAOS include member of the initial AAOS Council of Communications, chair of the Bylaws Committee, and member of the Resolutions Committee. As a mentor multiple times in the Leadership Fellows Program, he guided the development of several future AAOS leaders, including Dr. Teuscher.

He was also a member of the first class of instructors at the Bayer Institute for Patient Physician Communication, where he helped many orthopaedic surgeons around the country improve their communication skills and care of patients. In 2001, in recognition of his talents, service, and leadership, Dr. Scutchfield became one of the first nonacademic fellows inducted into the American Orthopaedic Association.

Dr. Scutchfield has also been a leader in advancing minority interests and promoting diversity in orthopaedics. After his return from Washington, D.C., he helped establish an independent department of orthopaedic surgery at the University of Kentucky (UK) College of Medicine and was one of the driving forces for diversification within the department’s residency program.

Dr. Scutchfield said he joined the university for another important reason: to mentor young attendings and residents. “As associate professor of orthopaedics at UK, I enjoyed sharing my perspective on private practice, and in my role as chief of orthopaedics at the UK-affiliated Lexington Veterans Affairs (VA) Medical Center, I helped them understand the larger picture of patient care management,” he said.

In addition, Dr. Scutchfield often took younger surgeons along on short-term international medical missions to underserved countries, such as Honduras, Belize, Ecuador, Nicaragua, and Haiti, to broaden their perspectives and enrich their learning.

Dr. Scutchfield was born in Martin, Ky., and attended Morehead State University. After pursuing graduate studies in physiology for a year, he earned his medical degree from the UK College of Medicine. After completing his graduate medical education in 1980, he entered private practice in Danville, Ky. In June, Dr. Scutchfield retired from his position as faculty at the Department of Orthopaedic Surgery at UK College of Medicine and the Lexington VA Medical Center.

Dr. Scutchfield has been influenced by many role models and mentors throughout his life. Among them are his parents; John Arthur Siegling, MD, at the Medical University of South Carolina; Frank H. Stelling III, MD, at Greenville Shriners Hospital; Thomas Brower, MD, at the UK College of Medicine; and James Harkess, MD, at the University of Louisville. “So many leaders and friends in AAOS have inspired me to be my best, especially my great friend John R. Tongue, MD,” he said. (Dr. Tongue passed away in September 2019.)

Dr. Scutchfield also noted he could not have achieved any of his accomplishments without the support of his wife of 51 years, Bunny.

When asked what receiving the Tipton Leadership Award means to him, Dr. Scutchfield replied, “I am humbled when I look at the past recipients, all of whom I have known and greatly respected, as well as the award’s namesake, Dr. Tipton. I consider myself very fortunate to have worked beside these giants in orthopaedic medicine and to be recognized for this award.