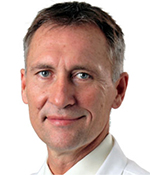 Each year, AAOS bestows its Humanitarian Award on a member who has distinguished himself or herself through outstanding musculoskeletal-related humanitarian activities in the United States or abroad. The award also recognizes orthopaedic surgeons who help to improve the human condition by alleviating suffering and supporting and contributing to the basic human dignity of those in need.

This year’s recipient is Steven J. Meyer, MD, FAAOS, of Dakota Dunes, S.D. Dr. Meyer was recognized for providing health care and human services to underserved populations in Tanzania for more than 20 years.

Neil P. Sheth, MD, FAAOS, said his colleague Dr. Meyer is most deserving of the Humanitarian Award because he is “dedicated to improving healthcare systems in countries where the need is greatest.”

Dr. Meyer and his wife, Dana, first traveled to Tanzania in 1996 on a three-week mission with their church. They were so moved by the country’s lack of health care and education that within six months of their return to the United States, they established Siouxland Tanzania Educational Medical Ministries (STEMM). The nonprofit organization is dedicated to bringing medical care and educational opportunities to the East African nation.

During their inaugural mission, Dr. Meyer and his medical team performed the country’s first orthopaedic surgery in Arusha, one of Tanzania’s most populated cities. “Our instruments were sterilized in a pan on a hot plate,” he recalled. Just seven years later, in 2003, he performed the first total hip replacement in the country, and in 2004, the first total knee replacement. “Our introduction and advancement of joint arthroplasty, in collaboration with Lawrence D. Dorr, MD, and Operation Walk, has affected hundreds of individuals and their families in Tanzania,” Dr. Meyer said.

STEMM has grown considerably over the years, and its scope has broadened. More than 1,000 general and orthopaedic surgeries have been completed in Tanzania since STEMM’s inception. A fellowship-trained pediatric orthopaedic surgeon, Dr. Meyer has operated on hundreds of children with a multitude of deformities.

Under the daily management of Dr. Meyer and his family, the organization has also built a fully staffed 50-child orphanage, feeds 5,000 kids from the local village lunch every day, and has helped 10,000 children attend high school and university through mentoring and scholarships. “These were kids who were herding goats and living in mud huts, and now some of them are attending schools like Harvard and New York University,” Dr. Meyer said.

In addition, STEMM has built roads, bridges, classrooms, teacher housing, and a birthing center in the village. “It used to be that mothers would rather deliver their babies in mud huts because conditions in the hospital in Arusha were so abysmal,” he explained. “Now the village has a modern birthing center—with a doctor, nurse, fetal monitors, and oxygen—that delivers 100 babies per month.”

Dr. Meyer thanks the Lord for what STEMM has been able to accomplish over the years. One of its most recent accomplishments took place in May 2017, when the mission team encountered a tragic bus accident in Arusha that killed 35 school children. STEMM members rescued the three critically injured survivors, and Dr. Meyer was able to secure their transport to Sioux City, Iowa, for treatment by him and his colleagues at the Center for Neurological and Orthopedic Sciences. Collectively, the three children had sustained more than 25 fractures.

“Just a month out from their devastating injuries, two of the children, both with complex femur fractures and multiple upper-extremity fractures, were up [and] walking. After our decompression and stabilization, the third [child], who had sustained femoral neck, humerus open mandible, pelvis, and four thoracic spine fractures and was paraplegic, had near complete neurologic recovery,” Dr. Meyer said.

Helping others is something that runs in Dr. Meyer’s family. His wife has accompanied him on half of his trips to Tanzania, and each of his three teenage children has traveled there seven times.

“Our humanitarian efforts through STEMM have been far and away the priority of our family’s life for the past 23 years. My children all want to pursue careers in medicine and be involved in mission work. They’ve seen firsthand the joy that comes from giving of one’s self,” Dr. Meyer said.

A lover of the outdoors, Dr. Meyer enjoys golfing, fishing, hunting, and hiking but said that over the years, those activities have gone by the wayside. When asked why, he replied: “I’d rather take care of orphaned kids.”

He added that he’s privileged to be able to do the work he does in Tanzania, and he’s excited about what lies ahead as the mission continues to grow. STEMM is now involved in a collaboration to develop an institute of orthopaedic surgery in northern Tanzania that would provide world-class orthopaedic care for 20 million people.

“When we are called to think beyond ourselves and instead think more about others, awesome things happen,” Dr. Meyer said.

Dr. Meyer is the author of the book “Answer The Call: The Story of The Miracle Kids in Tanzania.” For more information about the book and STEMM, visit stemm.org.