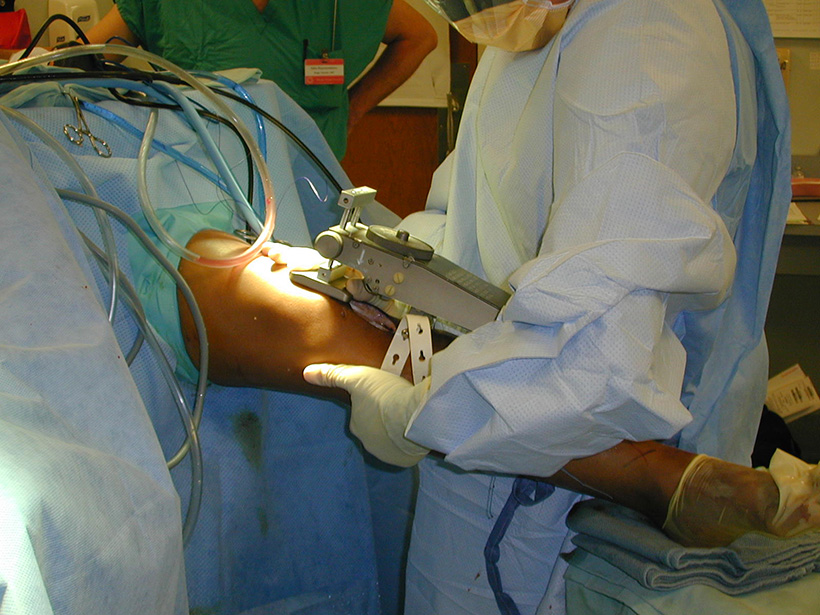 Fig. 1 A knee arthrometer was used intraoperatively to measure knee laxity to check that the initial graft tension conditions relative to the contralateral control were met.
Courtesy of Braden C. Fleming, PHD

“I was always interested in the long-term consequences of ACL injuries, particularly because these patients are at a higher risk for PTOA for reasons that are largely unknown,” said Dr. Fleming. “A variety of factors are thought to be the cause, such as the impact of the joint at the time of injury, which initiates a bone bruise; damage to other structures in the knee joint (like the meniscus); inflammation; altered kinematics; and altered joint contact load. Most likely, it’s a combination of all of these factors.”

With a desire to explore the mechanical functions of the knee and determine whether graft tension was a primary factor in developing PTOA, Dr. Fleming had the inspiration for his next body of research.

According to Dr. Fleming, there are two theories when it comes to graft tension. “The first is to apply a tight graft at the time of surgery with the idea that it will stretch over time and return to normal. The other is to put the graft in at a low tension to immediately restore normal laxity at the time of surgery, so ideally it won’t stretch out with time,” he explained.

The patient cohort consisted of those aged 15 to 50 years with a unilateral ACL injury who were candidates for ACL reconstruction with one of the two autografts: bone-patellar tendon-bone or four-stranded hamstring tendon. Each patient selected the graft type, and all surgical procedures and postoperative rehabilitation were standardized.

“We generally found there was no significant difference in most of the outcomes between the two graft tensioning conditions,” explained Dr. Fleming. “In fact, the grafts in both groups ‘stretched out’ to the same level over the first year of healing. Overall, the clinical, functional, patient-reported, and PTOA imaging outcome measures showed that the reconstructed knees, regardless of tension group, did not return to those of the control group at seven years.”

Fig. 1 A knee arthrometer was used intraoperatively to measure knee laxity to check that the initial graft tension conditions relative to the contralateral control were met.
Courtesy of Braden C. Fleming, PHD 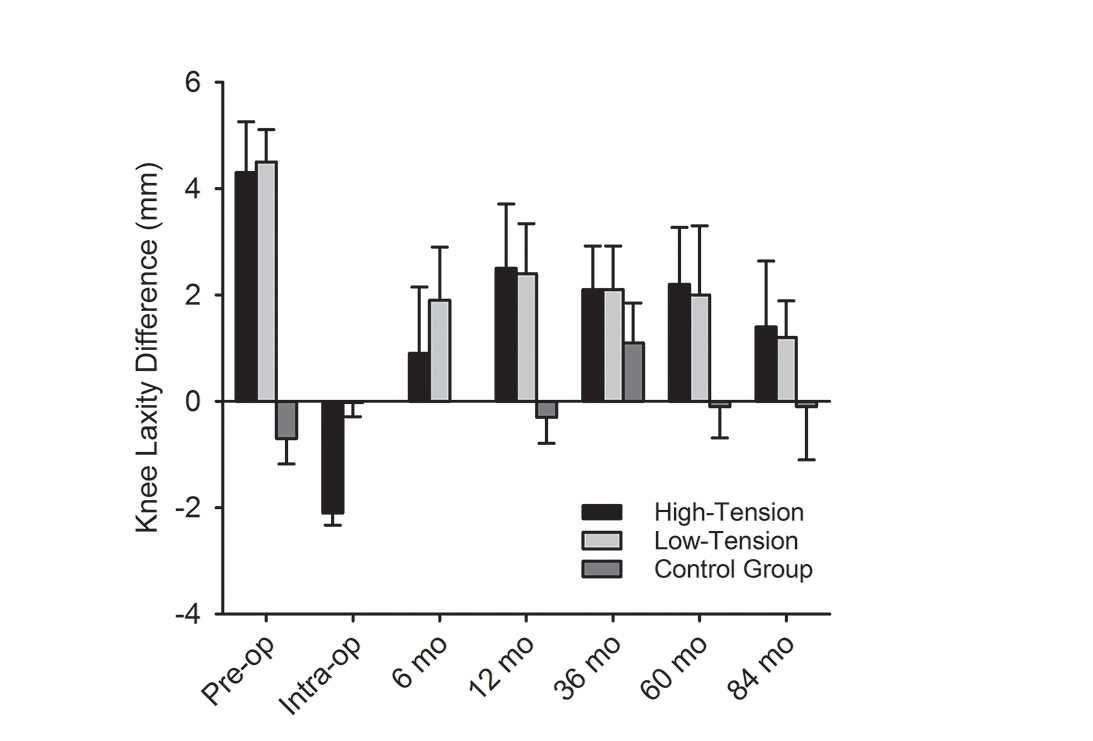 Fig. 2 The mean changes in anteroposterior knee laxity difference (surgical-contralateral) over time for the two tension cohorts and the matched control group. The grafts of both tension groups stretched out over the first year and remained greater than the contralateral limb and control group at seven years postoperatively.
Reproduced from: Akelman Mr, Fadale PD, Hulstyn MJ, Et Al: Effect of Matching Or Overconstraining Knee Laxity During Anterior Cruciate Ligament Reconstruction on Knee Osteoarthritis and Clinical Outcomes: A Randomized Controlled Trial With 84-Month Follow-Up. AM J Sports Med 2016;44:1660-70. 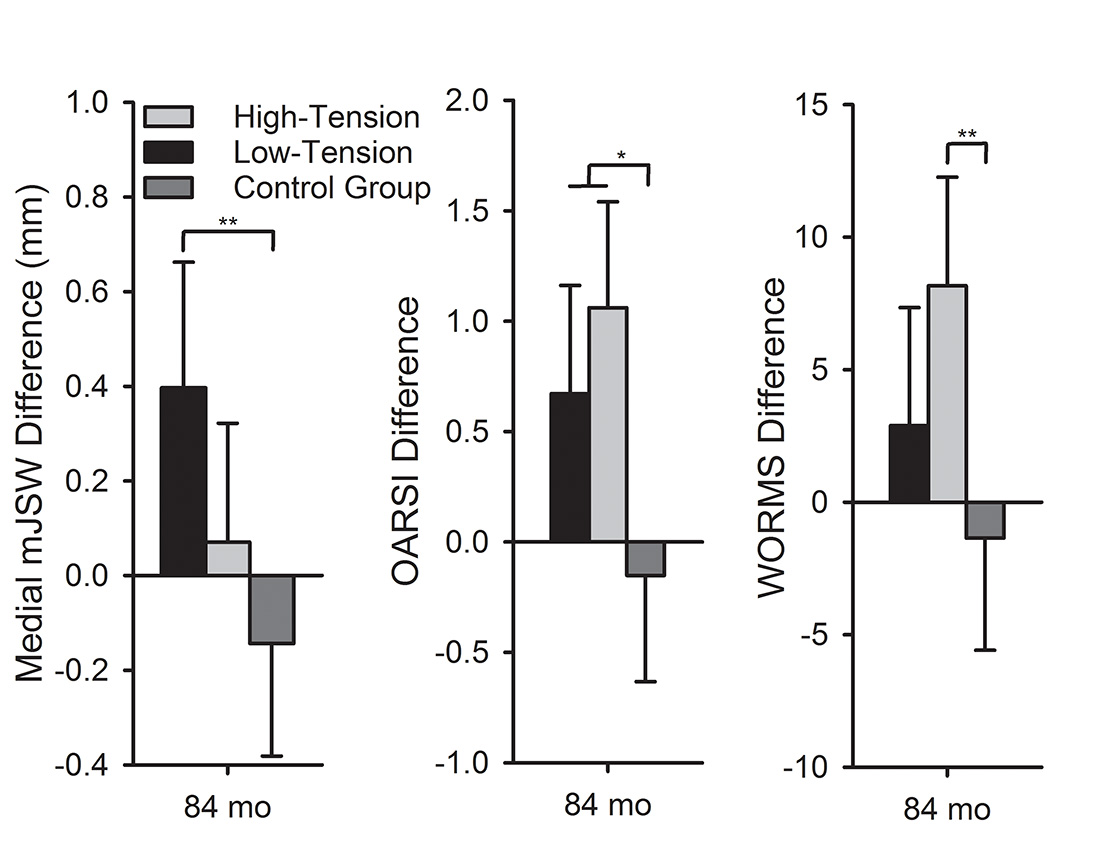 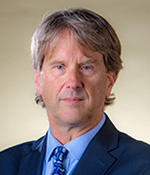 There were no significant postoperative differences in AP knee laxity (measured with the KT-1000 Knee Arthrometer) (Fig. 2) or clinical examination results (the 2000 International Knee Documentation Committee Knee Examination Score) between the two tension groups (P > 0.68). Both of those outcomes did not equal that of the control group.

The one-leg hop distances for the two tension groups were significantly less than the control group (P < 0.02), although there was no difference between tension groups (P = 0.59).

Using the Knee Osteoarthritis Outcome Score and the 36-item Short Form Survey to measure knee-related quality of life, sports/recreation function, activities of daily living, symptoms, pain, and general mental and social health, the researchers found no differences between the tension groups. The tension groups were worse than the control group.

The primary driver of OARSI and WORMS was presence of osteophytes.

Strong trends emerged showing differences between the two initial graft tension groups related to PTOA development at seven years. Long-term follow-up may be required to fully reconcile those findings and to determine which patients become symptomatic.

The research team received additional NIH funding (R01-AR074973) to follow this patient cohort for 12 to 15 years.

The tension study cohort resulted in a database of numerous outcome measures, which has led to seven separate studies. “We leveraged the database to ask about factors that could influence long-term outcomes and predict which patients may be at higher risk for PTOA,” said Dr. Fleming. “These studies are helping to gain additional insight into the causes of PTOA following ACL injury to further help patients.”

Jennifer Lefkowitz is a freelance writer for AAOS Now.