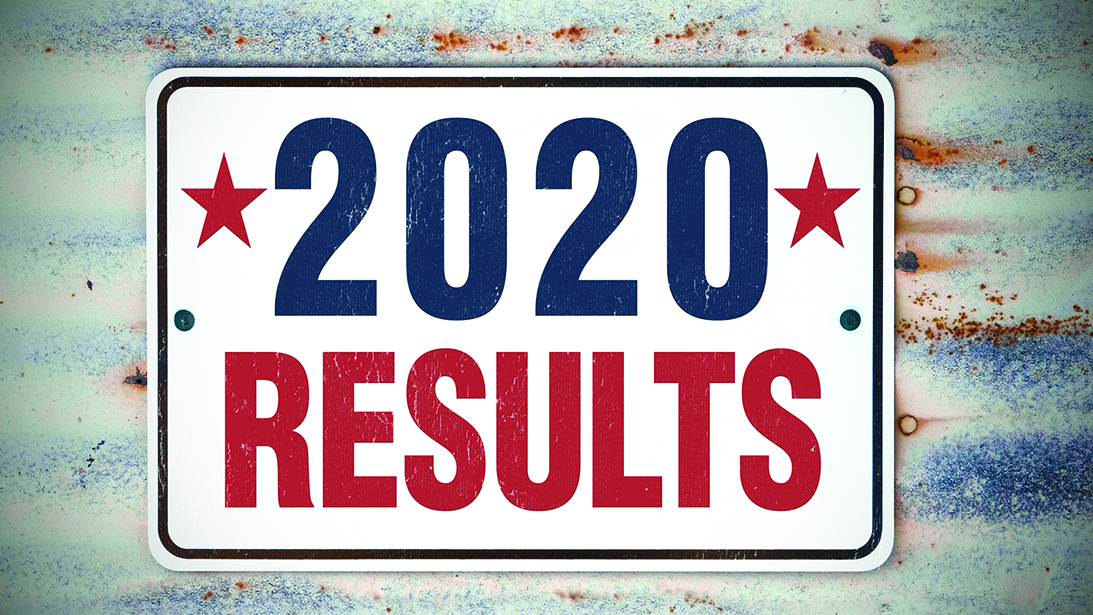 In the October issue of AAOS Now, the Association’s political team predicted that the 2020 General Election would have one of the highest voter turnouts in modern history with the most diverse electorate, and they were right. With a record 160 million votes tallied at press time, 67 percent of the eligible voting-age population showed up to the polls. To put this in perspective, that’s more than 20 million more votes than were cast in the 2016 election. This record voter turnout is primarily due to the more than 100 million ballots that were cast in the early voting period. The AAOS political team is proud to have played a small part in this historic milestone by encouraging U.S. members to vote and by providing state-by-state voter resources to help them navigate the voting changes and options in the current COVID-19 environment.

Although it is difficult to measure how divisive an election is, the 2020 election ranks near the top. The AAOS Orthopaedic Political Action Committee (OrthoPAC) staff received a record number of queries regarding which candidates it supported and why, which the staff members welcome and enjoy. The goal for OrthoPAC is to be 100 percent transparent, and political staff members appreciate the conversations.

In the 2020 election cycle, OrthoPAC supported 218 incumbents for federal office—110 Democratic members and 118 Republican members. The scope of support for an incumbent is decided by the following factors: how the member has voted on issues and priorities of importance for orthopaedics; committee assignments and/or leadership; the relationship the member has with AAOS staff in Washington, D.C.; and the relationship he or she has with AAOS members in the state and district. All political parties are important for the orthopaedic specialty, often on different issues (prior authorization, surprise billing, physician-owned hospitals, Medicare pay cuts, etc.).

OrthoPAC supported 27 open and challenger races in the 2020 election cycle. For those races, the candidate needs an endorsement from an AAOS member living in the district or state. Once an endorsement is received, the candidate or challenger completes a candidate questionnaire highlighting his or her views and stances on AAOS priorities and initiatives; then the AAOS OrthoPAC Executive Committee votes to decide whether it will extend support after reviewing the questionnaire.

Of the candidates that OrthoPAC supported for open seats in the 2020 election cycle, it was pleased that one of the most prominent advocates in the House of Representatives, Roger Marshall, MD (R-Kan.), an obstetrician, was victorious in his bid for the Senate. Another nonincumbent physician who won his race was Ronny Jackson, MD (R-Texas), an emergency physician and most notably the former White House physician for President Donald J. Trump. Mariannette Miller-Meeks, MD (R-Iowa), is another nonincumbent physician candidate whom OrthoPAC supported. Dr. Miller-Meeks is an ophthalmologist who is running for the open Iowa District 2 seat. As of Nov. 16, that race has yet to be called. With 100 percent of the vote reporting, Dr. Miller-Meeks is leading her opponent by just 47 votes—the closest race in the country. Senator-elect Marshall will be joining three other physician senators in the upper chamber: Senator Bill Cassidy, MD (R-La.), a gastroenterologist; Senator Rand Paul, MD (R-Ky.), an ophthalmologist; and fellow orthopaedic surgeon Senator John Barrasso, MD, FAAOS (R-Wyo.). Congressman-elect Jackson and presumably Congresswoman-elect Miller-Meeks will be joining 12 other physicians in the House of Representatives. These physician members have intimate working knowledge of the healthcare system, which will allow orthopaedists to amplify their voices for patients and the profession in the 117th Congress.

Overall, OrthoPAC is very pleased with its win rates, especially given the historic number of congressional retirements. In the 2020 election cycle, 43 members retired or sought another office—almost double the average amount of member retirements in a typical congressional term. Although AAOS did lose some congressional allies and is dismayed that not all of the physician candidates it supported were triumphant in their congressional bids, the Association remains well positioned to tackle its priorities and educate new members of Congress on issues of importance to the musculoskeletal community.

OrthoPAC invested heavily in pro-surgeon candidates, which will continue to be one of the most effective tools in the advocacy arsenal. Now is the time to help build its war chest back up—contribute to OrthoPAC by texting AAOS to 41444 or by visiting aaos.org/pac.

Brittany Starr is the senior manager of political affairs in the AAOS Office of Government Relations.

Election by the numbers

Supported 245 candidates and members, including:

Had an overall win rate of: