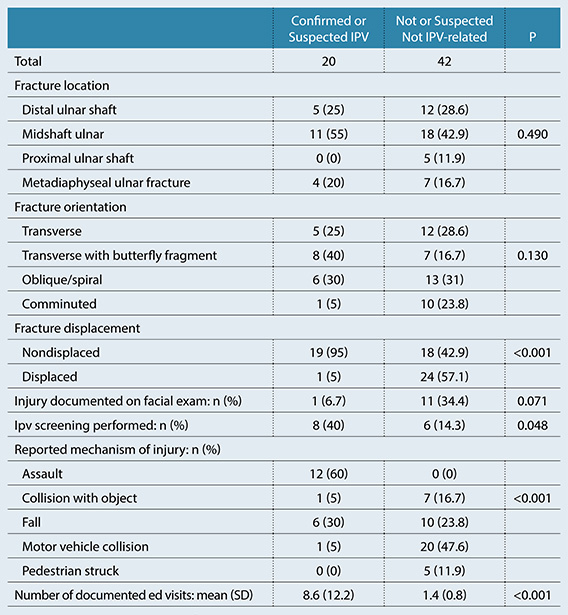 A study indicated that up to one-third of women who sustain a fracture to the ulna bone of the forearm may be victims of intimate partner violence (IPV). Ulnar shaft fractures are colloquially known as “nightstick” fractures as they commonly result from assuming a defensive posture with the forearm while being assaulted.

David Sing, MD, an orthopedic surgery resident at Boston University Medical Center and the presenting author of the poster study, on display today and tomorrow in Academy Hall, told AAOS Now Daily Edition that injuries from IPV against women may be seen first by orthopaedic surgeons managing fractures, but recognition of IPV remains difficult. Previous studies have indicated orthopaedic surgeons have several misconceptions about the victims and their abusers. Orthopaedic surgeons need to recognize injuries that may result from IPV and the practice or institution should have a list of readily available resources for the victims.

Dr. Sing said the study was undertaken in collaboration with five other hospitals in the Boston region to “look for any trends in our institutional data that would better inform clinicians managing this injury.” The investigators queried electronic medical records from the six hospitals to identify a cohort of female patients aged 18–50 years who sustained nightstick fractures between 2005 and 2019. Radiographs and notes from the ED and clinic were reviewed to collect patient demographics, known IPV risk factors, associated injuries, whether IPV screening was performed, and fracture pattern—with particular attention to the displacement of the fracture.

Patients were stratified into four groups based on self-reporting and/or injury documentation as reported by emergency medical services personnel: confirmed IPV; suspected IPV; suspected unrelated to IPV; and confirmed unrelated to IPV. Fractures were classified as minimally displaced if they had <50 percent translation and><10 degree angulation. the ulna was divided into fourths related to location, with olecranon fractures excluded. comparative statistics were performed with and without suspected cases to identify characteristics unique to ipv.>

Comparative analysis with and without suspected cases demonstrated IPV to be associated with minimally displaced fractures (95 percent versus 43 percent [P <0.001] for suspected cases and 91 percent versus 44 percent [>P = 0.012] for unsuspected cases). Confirmed cases were also associated with homelessness (5 out of 12 patients versus 0 out of 34 patients; P <0.0001) and number of documented ed visits attributable to musculoskeletal injury (average, 4.4 ± 3.7 vs. 0.9 ± 0.4;>P <0.001). formal documentation of ipv evaluation or screening was completed in only 40.0 percent of confirmed suspected ipv patients and in 14.3 percent of confirmed suspected unrelated to ipv patients.>

From their findings, Dr. Sing and his colleagues surmised that “screening for IPV is lacking, as it was instituted in only 40 percent of suspected and confirmed cases.” Therefore, they wrote, “We recommend that orthopaedic surgeons maintain a high degree of suspicion of IPV when treating nightstick fractures, particularly if they are minimally displaced.” They noted that a chart review for the number of ED visits for musculoskeletal complaints and the lack of domicile may also help in identifying potential victims. “Orthopaedic surgeons are in a position to help patients get help in this dangerous circumstance,” they added.

Dr. Sing said that, while completing this study, “I recounted several times when I evaluated patients with this injury. Most of these injuries go through the emergency room or clinic without anyone screening for IPV. It is an opportunity for improvement in taking care of the whole patient and not just an orthopedic injury.” He noted that women with ulnar fractures who are reluctant to report IPV will often attribute their injuries to a fall.

Homelessness and IV drug abuse were also highly associated with IPV in this study.

Among limitations, the patient population was at an urban center, and data may not reflect traits of IPV-related forearm fractures in rural or suburban settings. Further, a larger sample size would increase Dr. Sing’s confidence in the findings. The study will be on display today and tomorrow in Academy Hall, Sails Pavilion, from 7 a.m. to 6 p.m.