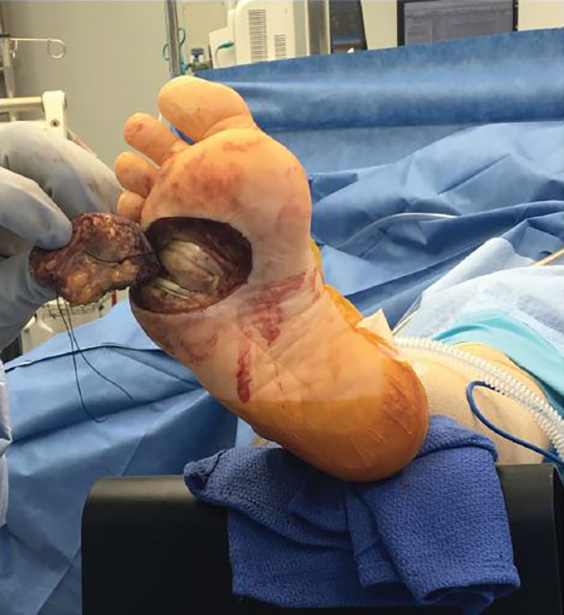 After a patient underwent unplanned resection of sarcoma on the foot, surgeons needed to do a much wider and more morbid surgery (above), eventually requiring a flap. Net result: three procedures instead of one.
Courtesy of Ana C. Belzarena, MD

‘When in Doubt, Refer’: Avoid Unplanned Resections of Soft-tissue Masses

A study that will be presented today found that despite standard educational grounding about initial evaluation and management of soft-tissue masses, “Orthopaedic surgeons continue to make what may turn out to be the mistake of an unplanned resection.”

Compared to physicians in other surgical services, orthopaedic surgeons are significantly more likely to order the appropriate imaging study prior to surgical intervention or other course of therapy; nonetheless, they perform unplanned resections in appreciable numbers. 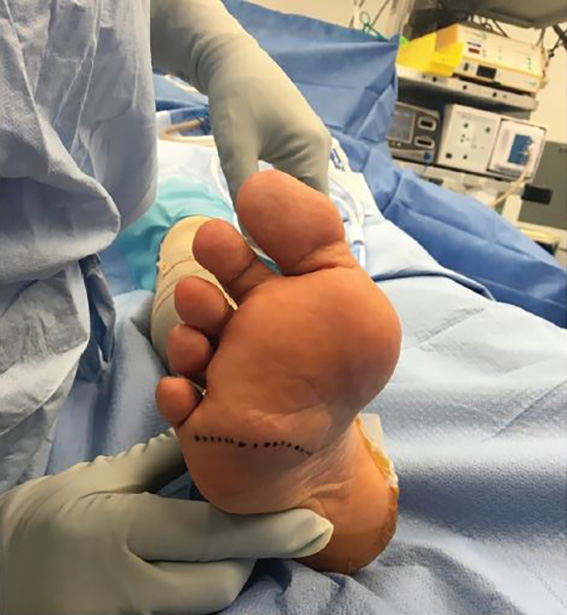 After a patient underwent unplanned resection of sarcoma on the foot (above), surgeons needed to do a much wider and more morbid surgery, eventually requiring a flap. Net result: three procedures instead of one.
Courtesy of Ana C. Belzarena, MD

After a patient underwent unplanned resection of sarcoma on the foot, surgeons needed to do a much wider and more morbid surgery (above), eventually requiring a flap. Net result: three procedures instead of one.
Courtesy of Ana C. Belzarena, MD

Presenting author Ana C. Belzarena, MD, told AAOS Now Daily Edition that soft-tissue sarcomas—rare malignancies arising from mesenchymal stem cells—often present with unspecific symptoms, so that “unplanned resections commonly occur.” The cornerstone of the treatment for confirmed soft-tissue sarcomas is a wide-margin resection. “When the surgery is not planned in advance for that goal, it increases the chances of having residual tumor and local recurrences,” Dr. Belzarena said.

The authors noted that unplanned excisions tend to happen in community or nonspecialized cancer center settings where verified soft-tissue sarcoma is uncommon.

Orthopaedic surgeons performed 17.8 percent (n = 19) of the unplanned resections of six liposarcomas, 4 UPSs, and three chordomas. Most of the patients initially presented with a growing mass or a painless mass. Seven lesions were less than 5 cm, whereas 12 were greater than 5 cm. Only 25 percent of the large sarcomas underwent a biopsy and histologic evaluation prior to resection. Fourteen of the unplanned resections involved a deep tumor. Orthopaedic surgeons obtained an MRI with contrast in 47 percent of cases, whereas only 18 percent of physicians in other surgical services obtained a contrasted MRI (P = 0.013). The most common incorrect diagnoses were hematoma or vascular malformation, cyst, and lipoma.

Dr. Belzarena, of Miami Cancer Institute in Miami, said the inspiration for the study came to her during orthopaedic oncology fellowship training. “Seeing patients who have suffered an unplanned excision and its consequences, oftentimes preventable, prompted me to look into this problem in more detail,” she explained. “I discussed it with my mentor at the time, David Joyce, MD, and we decided we wanted to understand the deep causes of this phenomenon and the steps that lead to this outcome. We believed that by doing a thorough root cause analysis, we would be able to help others prevent this from happening when possible.”

The overall finding of their investigation: “There are several steps, sequentially or in parallel, that end up contributing to a patient undergoing an unplanned sarcoma resection. The physician may not order the indicated imaging exams, or if they do, the report may be inaccurate. In other cases, the physician might fail to order or perform a prior biopsy or take other measures,” she said. “We are not trying to point fingers but are basically saying all of it can be prevented by an early referral of these patients to a specialized sarcoma center,” Dr. Belzarena said.

The clinical takeaway, she said: “If you ever encounter a patient with a soft-tissue mass, even if everything points at it ‘just being a lipoma’—one of the most common misdiagnoses along with hematoma—check with an oncology orthopedist, order imaging studies before taking the patient to the OR, and, if in doubt, please refer to a specialized sarcoma center.”

Education is a key factor in this issue, and medical residents “should be learning how to avoid ending up in this situation,” Dr. Belzarena noted. This point, she said, “is far more important than knowing [how to identify] the classic multiple myeloma cell when you look at it [under] the microscope or the translocation associated with synovial sarcoma. Knowing how to avoid an unplanned resection for sarcoma should be paramount in their orthopaedic oncology training.”

She offered a final piece of advice: “Don’t lose the phone number of that friend that does oncology orthopaedics. If in doubt, always refer.” The study will be presented as Paper 153 at 11:15 a.m. in Room 32.