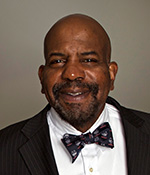 Cato T. Laurencin, MD, PhD, FAAOS, was named the 2021 Kappa Delta Ann Doner Vaughn Award recipient for his 30 years of scientific research in musculoskeletal regenerative engineering, the field which he founded and brought to the forefront of translational medicine. Dr. Laurencin’s work has led to the development and advancement of biodegradable polymeric materials in bone repair and tissue regeneration.

“When I started my laboratory at the Massachusetts Institute of Technology in 1988, bone was a primary target to study and develop, as scientists had just learned how to actually grow human bone cells outside the body,” said Dr. Laurencin, the Albert and Wilda Van Dusen Distinguished Endowed Professor of Orthopaedic Surgery and chief executive officer of Connecticut Convergence Institute for Translation in Regenerative Engineering at the University of Connecticut. “We essentially started a new field––regenerative engineering––and have continued to progress the field with a journal and a society, which bring together individuals from broad areas and viewpoints for the purposes of studying regeneration.”

With their work, Dr. Laurencin and colleagues sought to identify an alternative, synthetic solution for the issues involved in auto- and allografts for bone graft procedures.

“Autografts are the gold standard for use in bone regeneration, but they have limitations in terms of donor site morbidity for harvesting and supply,” Dr. Laurencin said. “Some of our work focused on creating engineered materials that are actually inductive—that is, they can foster bone regeneration by themselves without the addition of morphogenetic factors.”

Dr. Laurencin and his colleagues began by engineering musculoskeletal tissues, applying biological, chemical, and engineering principles to repair, restore, or regenerate living tissue using biomaterials, cells, and additional factors. Over the past 30 years, he has explored the use of biodegradable polymeric and ceramic materials for use in bone repair, focusing on poly(ester), poly(anhydride) and poly(phosphazene) biomaterials alone or in combination with hydroxyapatite—a naturally occurring mineral—and other ceramics to form two-dimensional (2D) and three-dimensional (3D) matrices.

The research showed that the use of a matrix system could facilitate bone regeneration, providing a framework to which osteoblasts may bind their extracellular matrices (ECMs) and bridge bone defects. The matrices are biodegradable and designed so that, over time, the osteoblasts secrete ECM, allowing the biomaterial to be completely absorbed. Eventually only regenerated bone remains.

Dr. Laurencin set out to study the behavior of osteoblasts on new materials, starting with 2D matrices, which supported the attachment, growth, and osteoblast traits by osteoblast-like cells. He was able to design and produce novel materials and has continued to develop additional novel polymers, making innovative blends with other degradable polymers.

Once Dr. Laurencin and his team established that the biomaterials could be used as bone regeneration platforms, they developed porous, biodegradable 3D-poly(organophosphazenes) matrices for tissue regeneration. The matrices’ interconnecting, porous network enabled organized cell growth, ECM formation, and mineralization, showing that the materials could be used for bone engineering applications.

The 3D matrix was then studied in animals and showed significant bone formation throughout the implant site by week eight, when combined with growth factors, demonstrating that the 3D matrix could be an effective bone graft.

The next frontier: limb regeneration

Building on his work in bone and soft-tissue regeneration, Dr. Laurencin has begun to apply regenerative engineering principles as an approach to regenerating complex tissues with the goal of limb regeneration. In 2016, the University of Connecticut announced a revolutionary project overseen by Dr. Laurencin––the Hartford Engineering a Limb Project, which aims to regenerate a human limb by 2030. Laurencin’s ambitious work has been recognized by the American Association for the Advancement of Science, which awarded him the Philip Hauge Abelson Prize for “signal contributions to the advancement of science in the United States.”