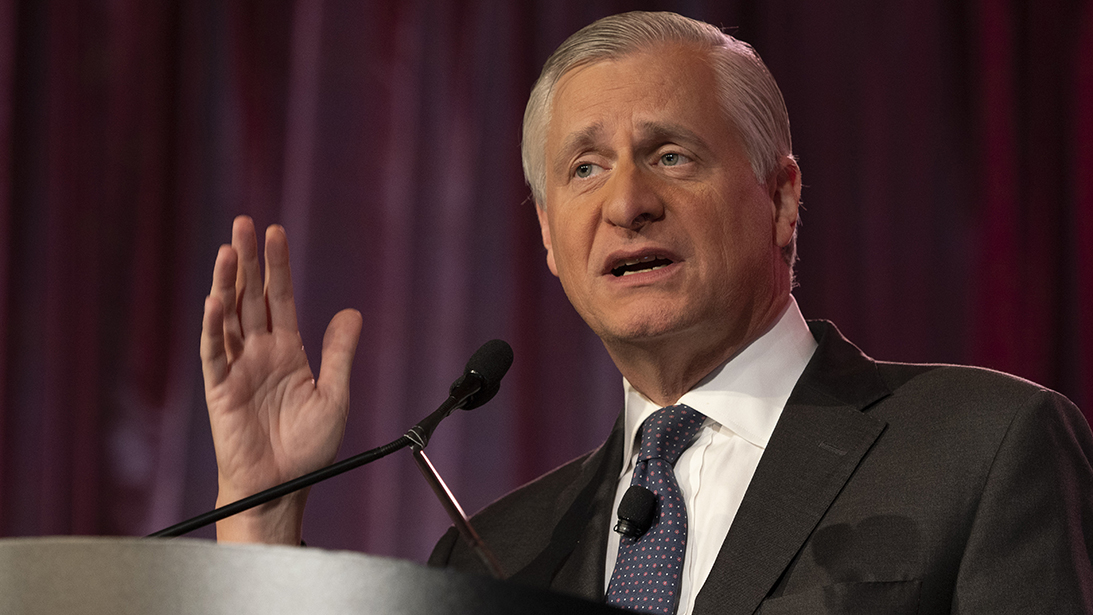 During Thursday’s Your Academy 2022, the premier event at the AAOS 2022 Annual Meeting, Presidential Guest Speaker Jon Meacham encouraged attendees to have faith in American democracy.

“We are without question in a moment of ferocious and deep division in the country,” Mr. Meacham admitted. “There is a fracturing of what we would like to think, ideally, is a social contract—not to attempt to agree on everything at all times, but to agree on the facts from which we can then make a ‘diagnosis.’”

U.S. history can be used, not as a GPS, he said, but as more of a diagnostic guide to identify symptoms that recur and suggest a certain underlying condition. Such guidance can also show treatments that have proven effective in the past.

The American past is Mr. Meacham’s area of expertise. A noted historian, writer, and commentator, Mr. Meacham has written biographies of three U.S. presidents, won a Pulitzer Prize for biography for his presidential history, American Lion: Andrew Jackson in the White House, and is a frequent commentator on history and politics on MSNBC and CNN.

His talk at Your Academy, “The Art of Leadership: Lessons from the American Presidency,” explored what people can learn from moments in U.S. history.

“We live in a world where appetite and ambition and kindness and cruelty and grace and rage and selfishness and selflessness are in a constant struggle with each other,” Mr. Meacham said. “That is my view of why the American experiment has a remarkable capacity to amend and reform itself.”

There are other moments in U.S. history that can be compared to the current social and political climate, Mr. Meacham said, quoting Mark Twain: “History doesn’t repeat itself, but it often rhymes.”

A century ago, the United States had just come out of the first world war. The Bolshevik revolution was creating worldwide anxiety about socialism. Segregation was de facto. There was enormous anti-immigrant sentiment. There were shifting demographics and there were riots. Soon after, the stock market crashed and the country entered the Great Depression. Then, along came Franklin Roosevelt.

“Greatness comes at the highest levels when people who could take absolute power, who could only advance their own interests, don’t,” Mr. Meacham said. “Those are the folks we build monuments to, whose portraits we look at.”

In the late 1960s, the country was facing challenges from the Vietnam War, the assassinations of Dr. Martin Luther King Jr. and Robert Kennedy, and Jim Crow laws. During this time, Lyndon Johnson, a president who received the most electoral votes in the history of the country, announced he would not seek reelection. He stepped back.

These are just two examples showing that positive and negative forces ebb and flow in American life, Mr. Meacham said, “and we are at our best when we force them to ebb.”

According to Mr. Meacham, three things can help us to do that. The first is curiosity.

His favorite illustration of this is Thomas Jefferson writing in 1776, “that all men are created equal, that they are endowed by their Creator with certain unalienable rights, that among these are life, liberty, and the pursuit of happiness.”

“Why did he write that sentence?” asked Mr. Meacham. “He was thinking about what had been unfolding in the three to four centuries before heading into Philadelphia.”

This period included the invention of the printing press, the scientific revolution, European enlightenment, the Protestant reformation, and the entire reorientation of the power structure of the world. President Jefferson’s sentence is the fullest manifestation of that shift.

Thomas Hobbes called the natural condition of mankind a “war of all against all” and the point of the United States is to bring order to that chaos.

“It is a precious fragile thing we have in our hands,” Mr. Meacham said. “We better be curious. We better understand it if we are going to save it.”

The second thing that can help force things to ebb is candor. There is a need to be more straightforward with each other. Everyone is competing for attention in today’s political environment, Mr. Meacham said. This competition creates three characteristics that guide public political discourse: speed, hyperbole, and predictability.

But there is something to be said for hearing things “straight from the shoulder” and being candid without being rude, he added.

“Democracy will depend on that,” said Mr. Meacham.

He evoked the sentiment of Winston Churchill addressing his government during dark times of 1942. Prime Minister Churchill said, “The British people can face peril or misfortune with fortitude and buoyancy, but they bitterly resent being deceived or finding that those responsible for their affairs are themselves dwelling in a fool’s paradise.”

It is important that the American people are not being lied to and that leaders are not lying to themselves.

“We need a culture that values and rewards people giving us bad news,” Mr. Meacham said. “That is really hard.”

The last characteristic needed to move society in the right direction is empathy.

Mr. Meacham shared two stories of George H.W. Bush to illustrate the power of empathy. The first was from President Bush’s school days where he helped a classmate who got stuck in a barrel during an obstacle course. When asked why he did it—at the cost of losing the obstacle course race—President Bush replied that he would want someone to pull him out of a barrel if he were ever stuck in one.

Cut to November 1989 and the fall of the Berlin Wall. President Bush decided not to comment or issue statements about the events.

President Bush thought of how he would want to be treated if America suffered a defeat, and he gave that type of empathetic state craft a try, Mr. Meacham said.

“For 30 years, we lived in a world that President Bush helped make possible because he thought about the other guy,” Mr. Meacham said.

As Mr. Meacham argues, that model of empathy is what U.S. citizens should strive to be as a country.

Leah Lawrence is a freelance writer for AAOS Now.