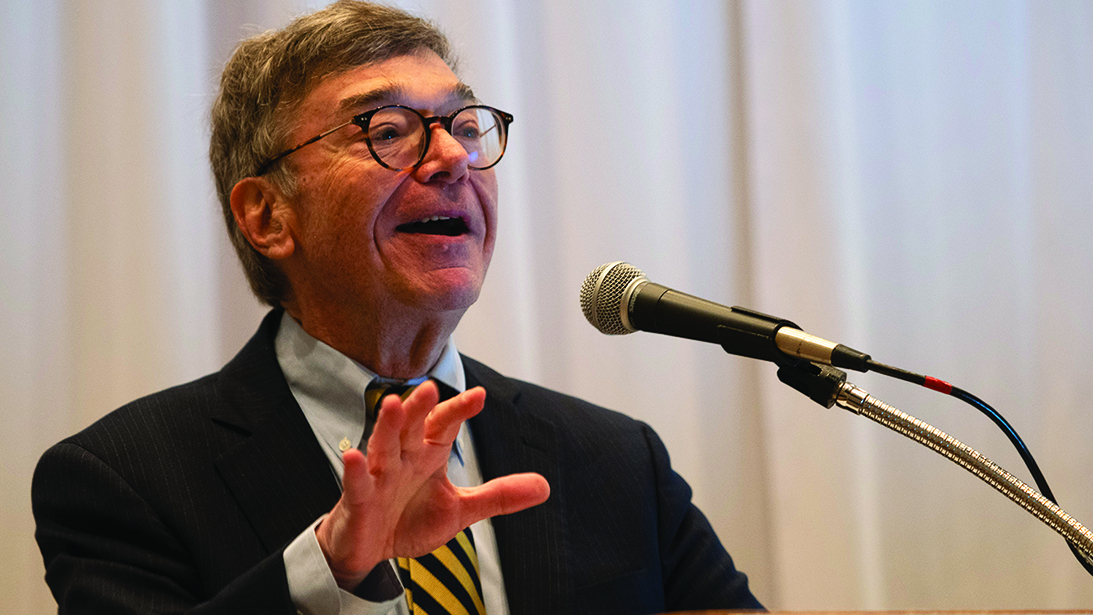 Charlie Cook, political analyst and founder of Cook Political Report, shared his analysis of the upcoming midterm elections with attendees of the OrthoPAC Donor Appreciation Lunch.

All about Orthopaedics and Politics

During the annual Donor Appreciation Luncheon at the AAOS 2022 Annual Meeting, members of the Orthopaedic Political Action Committee (Ortho- PAC) received an update on the PAC’s financial standing and activities during the 2022 election cycle, as well as an analysis of the upcoming midterm elections from political analyst and founder of Cook Political Report, Charlie Cook. Guest speakers discussed the importance of orthopaedic surgeons’ engagement in the political process, despite the highly partisan environment.

AAOS President Daniel K. Guy, MD, FAAOS, began by thanking donors for gathering at the luncheon. He highlighted that the OrthoPAC is the only medical PAC dedicated solely to advocating for orthopaedic surgeons and that, despite representing only 3 percent of physicians, it is the second-largest medical PAC in Washington, D.C. He informed attendees that an ambitious fundraising goal has been set for the 2022 election cycle—$4 million—and urged everyone to aid the organization in reaching that goal by encouraging their friends and colleagues to donate.

Next, John T. Gill, MD, FAAOS, chair of the OrthoPAC Executive Committee, continued by sharing impressive highlights from the 2022 election cycle. OrthoPAC has raised well over $2 million (hard and soft dollars combined) from nearly 2,900 contributors. More than $900,000 has been disbursed to support physician-friendly candidates, and more than 2,100 political events have been attended with Congressional members. For the first time in history, in 2021, AAOS had 100 percent PAC participation from the BOC and BOS.

In 2021, the PAC, its members, and the AAOS Office of Government Relations were able to:

Dr. Gill also noted several candidates with medical backgrounds who are running for office this year, including orthopaedic surgeon Al Olszewski, MD (R-Mont.), Rich McCormick, MD (R-Ga.-06), and Kermit Jones, MD (D-Calif.-04). OrthoPAC is also keeping a close eye on the 19 incumbent physician-members of Congress up for re-election in the midterms.

Finally, guests had the privilege of hearing from Mr. Cook, widely considered one of the nation’s leading authorities on U.S. elections and political trends. He began with a disclaimer that now is a challenging time to talk about politics but stressed the importance of “amplifying your voices in Washington, D.C., and in state capitals across the country.”

Mr. Cook spoke about three trends he has seen in recent years regarding the U.S. political system.

First, the country is incredibly divided, with the margins of victory in races becoming increasingly narrow. Though approximately 40 percent of voters say they are registered as Independent, only about 10 percent truly are, with the other 30 percent leaning toward one party or another. Second, the political landscape has become very unstable. Media consumption has evolved, particularly with the rise of social media, creating less of an overlap of news coverage, and higher rates of partisanship. Finally, he pointed out that the two parties have moved incredibly ideologically far apart.

In terms of these trends’ impact on this year’s midterms, Mr. Cook said, “It’s not a popularity contest.” Since the Civil War, the party in the White House has lost the House in 92 percent of midterm elections, and the Senate in 73 percent. Coupled with Democrat’s minute five-seat advantage in 2022, “It would take divine intervention or Republican self-destruction” for Republicans not to take back the House. The last four presidents in a row have seen Congress shift to the other party in the midterm election, and Mr. Cook predicted that this will happen again in 2022.

Following his remarks, Mr. Cook took several questions from the audience, largely focused on the future of our political party system, such as potential of letting Independents vote in either party’s primaries, or the introduction of a viable third party. “Some balance would be a whole lot healthier…but we’re never going to get an Independent third-party U.S. president,” Mr. Cook said. He emphasized the need to battle against hyper-partisanship, and thanked everyone for their involvement with the PAC.

The OrthoPAC looks forward to engaging with new members, and working with existing donors, to achieve its advocacy goals in the year ahead. To join the PAC, or learn more, visit www.aaos. org/pac.

Arielle Broussard is a director of political affairs for AAOS.

Brittany Starr is a senior director of political affairs for AAOS.