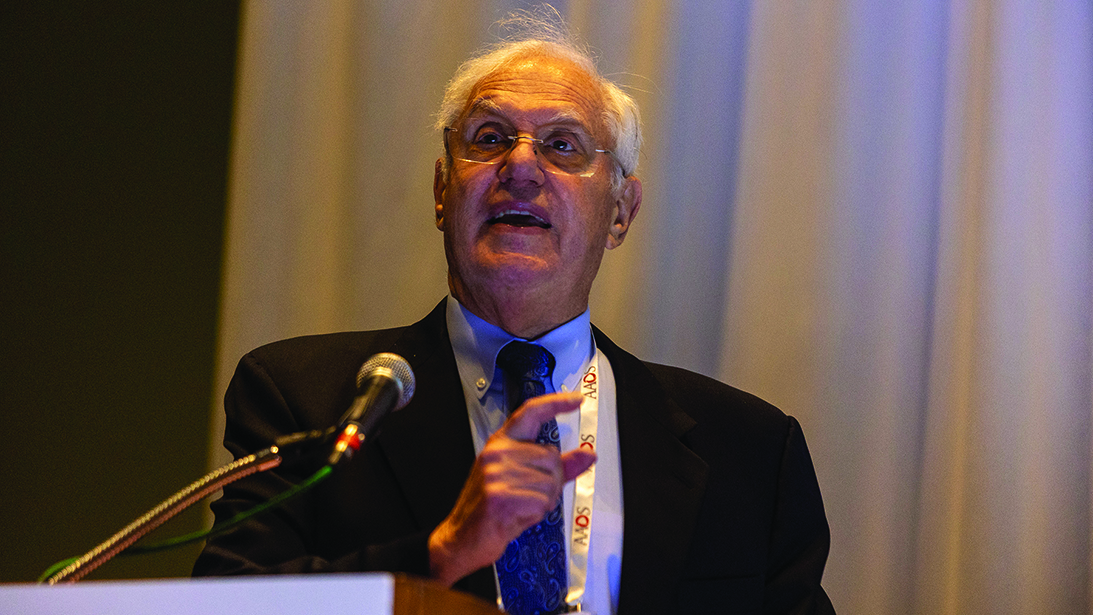 Moderator Stuart A. Green, MD, FAAOS, said he believes that material on legal hazards should be covered in orthopaedic training and in Board exams.

The takeaway from Wednesday’s symposium “Orthopaedic Surgeons in Prison: It Could Happen to You” was all too well encapsulated by that eye-opening title. Not only did the session’s panel include individuals with knowledge of the many ways in which physicians can find themselves in legal jeopardy, but two panelists were orthopaedic surgeons who have been convicted of crimes related to business arrangements and financial transactions that they say appeared to be legitimate when they entered into them.

One of those surgeons, Daniel A. Capen, MD, described how he got caught up in what federal prosecutors called a “kickback scheme” by the new owners of Pacific Hospital in California, who bought the enterprise in 2005. Dr. Capen had signed a management agreement originally in 1998 with the previous owners, and the new owners ostensibly continued the agreement. Dr. Capen described a nightmarish scenario that began in 2013 as the U.S. Attorney’s office launched an investigation, The Wall Street Journal reported on suspicious fee markups, and the hospital made a plea agreement. In 2018, Dr. Capen was indicted and subsequently pleaded guilty to what prosecutors said was his role in the scheme, and, in 2020, he began a 14-month sentence in a federal penitentiary. He was released on probation in 2021. In addition to the prison time, he surrendered his medical license and incurred some $8 million in legal costs, restitution payments, and loss of accounts receivable.

Jacob E. Tauber, MD, related a similar hellish ordeal that began with an arrangement in which a hospital subleased his office for use by another surgeon—an arrangement that the federal government viewed as a referral/ kickback scheme—and also involved a pharmacy arrangement. Dr. Tauber, who addressed the session via video, pleaded guilty to the charges and is awaiting sentencing. The conviction “has ruined my practice and has cost me $1 million,” along with a heavy toll on his personal life, Dr. Tauber said. “I will always be stigmatized and will always be a felon.”

The scenarios these two surgeons described have broad similarities that carry lessons for all orthopaedic surgeons, especially those in independent practice: Trouble began for both men because they assumed that the terms of the business arrangements they had entered had been scrutinized for legal compliance and therefore were legitimate financial agreements. “I always tried to do the right thing,” Dr. Tauber said. “I had a good reputation. I didn’t do unnecessary surgeries.”

Symposium moderator Stuart A. Green, MD, FAAOS, said that the particulars of the schemes that land surgeons in trouble may vary, with bad actors proving ever-ingenious at devising new schemes to reap illegitimate wealth, but most malfeasance boils down to kickbacks disguised as business arrangements.

Among the typical kickbacks are those involving payment to physicians for referrals for MRIs and CTs, electromyography and nerve conduction tests, pain management, hot and cold therapy machines, and disability forms.

Dr. Green described some of the various ways perpetrators of kickbacks and bribery operate. The briber may offer a management agreement for a practice that guarantees income that exceeds present earnings, or an agreement in which the briber subleases space from the practitioner far above the footage’s fair market value. In above-market- value agreements, the perpetrator may disguise kickbacks with excessive payments to practitioners for ED coverage, or a briber may set up employment services agreements in which salary-subsidized employees are provided to referral sources. One elaborate scheme involves a briber purchasing accounts receivable from a practitioner for an amount in excess of what both parties know is their true value.

The healthcare system, with billions of dollars flowing through millions of channels that may be opaque and difficult to trace, offers many enticements to people aiming to skim cash through illicit means.

Mark E. Schneider, JD, MA, is a lawyer who has worked the landscape of financial fraud in healthcare from both the prosecutorial side, as a former assistant U.S. attorney, and the defendant perspective, in his current role as a partner in Kirkland & Ellis, where he focuses on white-collar crime and healthcare fraud defense.

He explained that in investigating suspected kickback arrangements and other healthcare fraud schemes, federal investigators operate as they would for other types of crime, such as drug dealing. For instance, in Chicago, his team sought to identify physicians receiving cash for referrals to home healthcare operators. “Just like with a drug deal, we’d send in someone to go in wearing a wire,” he said.

The federal approach to investigating healthcare fraud generally begins with data analysis, Mr. Schneider said. “We will look for obvious billing issues, such as charges for more than 24 hours in a day and other deviations from the norm.”

Prosecutors make extensive use of “cooperators” in investigating criminal schemes. Because the federal penalties for healthcare fraud are severe, when investigators can demonstrate that they have strong evidence of a person’s criminal involvement, the prospect of avoiding serious charges and a harsh sentence can incentivize a person to cooperate with an investigation.

Mr. Schneider said that a distinctive aspect of federal investigations involving misdirection of funds is the role of the whistleblower, enshrined in laws dating back to the Civil War. Incentives can be substantial for persons who report misbehavior and malfeasance they have witnessed; people who provide information that leads to successful prosecution may collect 15 to 30 percent of a settlement, which has reached the billion-dollar range in some large cases involving healthcare-related corporations.

Mr. Schneider noted that in many federal investigations of criminal activity, “almost all the work is done before charges are filed.” Kickback cases usually involve multiple charges, and because a conspiracy is often involved, the charges will include obstruction of justice. Amid this “tangle of charges,” he observed, the message to defendants and savvy defense attorneys is: “You just have to lose one to end up in prison.”

The federal government has a high conviction rate because it chooses which cases to bring, Mr. Schneider noted; some 98 percent of cases are settled with guilty pleas.

For surgeons who are presented with business arrangements that may hint of potential for legal ambiguities, or worse, Mr. Schneider’s advice is to “talk to an experienced healthcare legal specialist.” “Some people go to their brother-in-law who does estate work. That’s a recipe for trouble,” he said. He emphasized that ignorance of the law is not an excuse.

Echoing that point, panelist B. Sonny Bal, MD, JD, MBA, PhD, FAAOS, and chief executive officer of SINTX Technologies, noted that the anti-kickback statutes specify that intent to defraud is not required for penalties, and proof of specific intent is not required for prosecution of self-referral by physicians.

Dr. Green said he hopes the lessons shared by the panelists extend to the profession at large. One step would be to expand the literature on healthcare fraud and pitfalls that ensnare physicians and convey that information to orthopaedic residents and cover it in examinations.