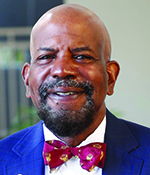 AAOS presented its 2022 Diversity Award to Cato T. Laurencin, MD, PhD, FAAOS. The Diversity Award recognizes AAOS members who have distinguished themselves through their outstanding commitment to making orthopaedics more representative of and accessible to diverse patient populations.

“I am very proud to receive this award,” said Dr. Laurencin, the Albert and Wilda Van Dusen Distinguished Professor of Orthopaedic Surgery at the University of Connecticut. “It recognizes my longstanding work promoting racial justice, racial equity, and gender equity in the profession and the world.”

The sum of those affected by Dr. Laurencin’s mentorship and work is beyond the scale of measure, according to MaCalus V. Hogan, MD, MBA, FAAOS, from the University of Pittsburgh McGowan Institute for Regenerative Medicine. Dr. Laurencin’s 40 years of work promoting racial and gender diversity has spanned the realms of science, technology, engineering, and mathematics and resulted in the establishment of programs that are poised to diversify the field of orthopaedic surgery—and medicine in general—for generations.

“Dr. Laurencin has been a torchbearer for diversity, lighting the path into this field that we all hold so dear, and he has done it for so many whom otherwise may not have considered, seen, or had the opportunity to realize its greatness,” said Dr. Hogan.

Dr. Laurencin’s efforts began at Harvard and the Massachusetts Institute of Technology in the 1980s, where he was assistant director of the Harvard Summer Health Professions Program, which trained students of color. His efforts continued at Allegheny University and Drexel University, where, as a professor of orthopaedic surgery, he funded and supported scholarships for Black and Latina women.

Soon thereafter, Dr. Laurencin became chair of orthopaedic surgery at the University of Virginia. He was the first Black surgeon and only the second Black chair in the history of the university. Some of Dr. Laurencin’s most significant contributions to diversifying the field occurred during his tenure as chair, according to Dr. Hogan. During that time, Dr. Laurencin acted with intent in the recruitment of women and people of color into the residency training program and faculty.

“Dr. Laurencin was the driving force behind improving and taking this department to be one of the top programs in the country both on a clinical and research level,” Dr. Hogan said. “His department was going to be a department that represented and reflected the world we live in with complete diversity and inclusion of all.”

“Several students from that era who are of underrepresented minority groups are currently residency program directors, vice chairs, and division chiefs at programs throughout the country. They too are now making strides to further diversify of our field,” added Dr. Hogan.

Continuing his career at the University of Connecticut, Dr. Laurencin further committed himself to building and fostering diversity initiatives. His work includes founding the Young Innovative Investigator Program, which recruited underrepresented students to the university for a two-year intensive mentoring and research experience that paved the way toward MD, PhD, or MD-PhD training. In addition, he has been the site principal investigator for the National Institutes of Health (NIH) BUILD (Building Infrastructure Leading to Diversity) grant program, which invites five Latino students each year to come to the university for intensive mentoring and research experiences. Finally, Dr. Laurencin headed an inaugural site for the National Science Foundation Research Experience and Mentoring Program, which invites inner- city minority high school students, college students, and teachers to his institute.

Dr. Laurencin has worked to foster diversity not only at his institutions but also at the national level. As speaker of the house for the National Medical Association (NMA), which is dedicated to supporting Black physicians and the patients they serve, he worked to develop the Department of Health and Human Services–funded National Research Mentoring Network. He also helped institutionalize the NIH/NMA Fellows Program, helping innumerable Black residents enter academic careers. Dr. Laurencin also cofounded the W. Montague Cobb/NMA Health Institute, which was designed to address health disparities and promote diversity in all its forms.

In recognition of his work, Dr. Laurencin has received numerous awards, including the J. Robert Gladden Orthopaedic Society Alvin Crawford Mentoring Award; the Association of American Medical Colleges Herbert W. Nickens Award; the Beckman Award for Mentoring; the American Association for the Advancement of Science Mentor Award; and the Presidential Award for Excellence in Science, Mathematics, and Engineering Mentoring, awarded to him by President Barack Obama during a ceremony at the White House. He has served on the Board of Directors of the J. Robert Gladden Orthopaedic Society, and he launched and serves as the editor- in-chief of the Journal of Racial and Ethnic Disparities.

On top of all these accomplishments, Dr. Laurencin is an extraordinary clinician and scientist, Dr. Hogan continued.

“His work and efforts have guided our profession and have set a path for the future,” he said.