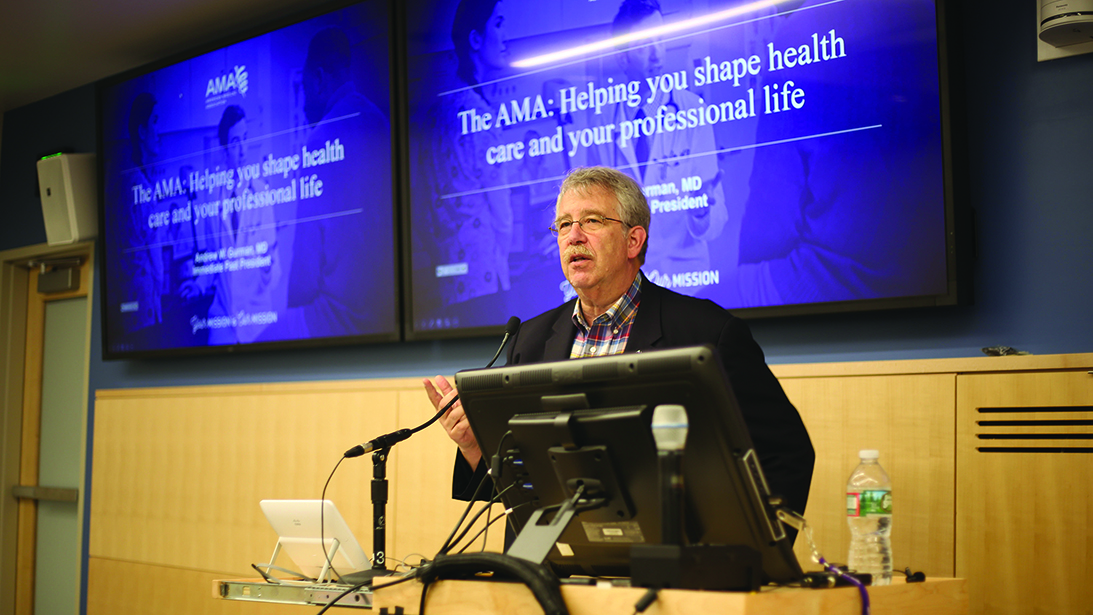 The Tipton Leadership Award recognizes AAOS members who have demonstrated outstanding leadership qualities that have benefitted the orthopaedic community, patients, and/or the American public. The award honors and celebrates the life, accomplishments, and qualities of the late William W. Tipton Jr, MD, an orthopaedic surgeon, educator, and former AAOS executive vice president.

“Dr. Tipton was an early mentor to me when I first got involved in the American Medical Association (AMA), and I am incredibly honored and humbled to be the recipient of the AAOS Tipton Leadership Award for service,” said Dr. Gurman. “To be recognized by one’s own peers for the work that I have done in organized medicine on behalf of physicians and our patients is very meaningful. I think Dr. Tipton would have been pleased with the way my career in organized medicine has played out.”

“Dr. Gurman, through his effective leadership as president of the AMA, has forever changed the profession of medicine for surgeons and physicians for the better, while promoting and maintaining our appropriate focus on the patients we serve,” said Dr. Humbyrd.

Dr. Gurman’s tenure as president of the AMA was a capstone for a career in organized medicine, spanning more than 40 years of leadership and advocacy for the medical profession. His earliest involvement began with the Pennsylvania Orthopaedic Society and, shortly thereafter, the Pennsylvania Medical Society in the 1980s.

“He was a regular fixture in Harrisburg, where he built coalitions with trauma surgeons, obstetricians and gynecologists, neurosurgeons, and orthopaedic surgeons,” said Dr. Humbyrd. “Dr. Gurman recognized early on that there is strength in numbers. When members of medicine can come together and fight the good fight together, we are unstoppable.”

Dr. Gurman served as speaker of the Pennsylvania House of Delegates from 2003 to 2007 and later was elected speaker of the AMA House of Delegates from 2011 to 2015, before becoming president in 2016. He was also named to Modern Healthcare Magazine’s “100 Most Influential People in Healthcare” in 2016.
As president of AMA, he successfully testified before the U.S. Congress in the House Judiciary Committee against the proposed mergers of several large insurance companies, which would have been anticompetitive and problematic for physicians, particularly those in private practice.

During all this work, Dr. Gurman maintained a private practice dedicated to hand surgery in Altoona, Pa., where he is known for his excellent work, quality, and attention to detail. He also currently serves on the AAOS delegation to the AMA.

“Dr. Gurman’s demeanor and passion for making sure that patients remain the first and foremost priority of the medical profession are no secret,” said Michael Suk, MD, JD, MPH, MBA, FAAOS, FACS, chief physician officer of Geisinger System Services. “He brings together many voices from disparate backgrounds, finding clarity in an advocacy agenda that could span any specialty for the purpose of patient care.”

Through his more than 15 years as a presiding officer of policy-making assemblies on the state and national levels, Dr. Gurman has also helped to shape future leaders. He has worked with young physicians of all races, genders, and persuasions, with several of his mentees now ascending to leadership positions in AMA, along with their state and specialty societies.

Dr. Gurman earned his medical degree from the State University of New York Upstate Medical University in Syracuse. He completed a surgical internship and residency in orthopaedic surgery at Montefiore Hospital/Albert Einstein College of Medicine and a fellowship in hand surgery at the Hospital for Joint Diseases Orthopaedic Institute in New York.