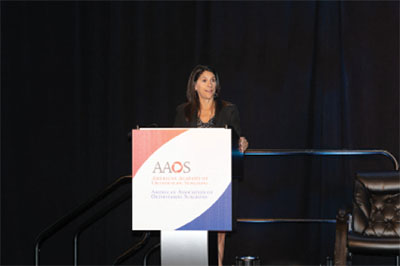 Karen Michael: According to The Joint Commission, intimidating and disruptive behaviors can foster medical errors; contribute to poor patient safety and preventable adverse outcomes; and cause clinicians, administrators, and other staff to seek new positions in a more professional environment.

Drawing the Line on Sexual Harassment

The outcry over allegations of egregious conduct toward women by high-profile figures in media and entertainment, including Harvey Weinstein and Matt Lauer, has led to a tipping point in terms of how even famous and powerful men are called to account for their behavior. Whereas once complaints by women about offensive comments, boorish advances, or outright assault drew shrugs and snickers or even retribution against those coming forward, now men like Charlie Rose and Garrison Keillor have been summarily dismissed from their high-profile positions in response to revelations of bad behavior, scarcely before one news cycle had passed.

Yet sexual harassment and bullying are not confined to the celebrity realm and, despite the events of the past year, continue to pervade workplaces and social settings. The world of medicine can’t claim exception, and orthopaedics, where the physician ranks and the positions of power are still strongly male-dominated, may well lag in upending and updating a culture that can harbor behavior now deemed unacceptable.

In recognition of the importance of the issue, AAOS devoted a full-group session during the National Orthopaedic Leadership Conference (NOLC) in June in Washington, D.C., in a symposium titled “Blurred Lines: Appropriate Behavior at Work.” Karen Michael, an attorney with expertise in employment law, training, and consulting, provided an overview of the legal environment as it pertains to sexual harassment and discrimination in the workplace, along with guidance for fostering a workplace where all individuals are valued and their legal rights are respected.

Ms. Michael began by noting that when she conducts such training, whatever the industry, she finds that “everyone thinks it’s the person next to them who needs the training. Nobody thinks they need it themselves.” Furthermore, men especially may think that by dint of their good intentions and special situation, they are able to engage in behavior that might be deemed inappropriate when done by others elsewhere. Take hugging. “Everyone thinks they’re different in terms of norms,” she said. “They say, ‘We’re like family. We’re stressed out.’ The law does not recognize an exception for any of that.”

She offered her expectation for the NOLC attendees: “This is a leadership conference, which means you are a leader of this organization. You need to know what to do and when to do it when you see something that you shouldn’t see.”

The harm that sexual harassment, bullying, and other inappropriate conduct inflict on their victims may be obvious, but such behaviors also have negative effects on the functioning of the enterprise, such as a hospital or medical practice. The effects may not be visible; for example, driving out talent. “Think of that top resident, nurse, office worker, [or] up-and-coming surgeon in your office. That person may be looking for another job—not because she’s not paid well or doesn’t like the work but because the person she is working with is a jerk. Studies show that people don’t complain about harassment; they just quit. They don’t want to get someone in trouble or make a big deal about it. They just leave,” Ms. Michael said. Thus, “it’s a business imperative to have appropriate workplace conduct.”

Just don’t do it

Addressing and managing the issue of inappropriate conduct are a matter of setting expectations—establishing a clear standard of what constitutes off-limits (“never-ever”) behavior and what falls into the gray area. Never-ever behavior includes “anything sexual,” “anything racial,” verbal abuse or bullying, as well as promoting or disparaging religion, disparaging any protected characteristic, dating a subordinate, touching, and disparaging or assuming a medical characteristic.

“Sexual harassment” covers a range of conduct, including requests for sexual favors or sexual activity or innuendo, such as sex-oriented “kidding” or jokes, flirtation, nicknames, or terms of endearment. It also includes comments about an individual’s appearance, clothing, body, or personal life. In addition, sexual harassment also can include “creepy” behaviors such as lurking, too-personal discussions, or electronic communication. “You’d be surprised how often texting comes up,” she said. “If you text someone at 10 p.m., ‘What are you doing?,’ That’s none of your business! If that person responds back ‘ha ha,’ that person is freaked out. ‘Ha ha’ is the universal word for ‘You are creepy, stop messing with me.’”

The gray area of “risky” behavior presents challenges because it can be difficult to define and involves conduct that may be viewed as innocuous or invasive, depending on the context and the person perceiving it.

Risky behavior includes “hugging, coworker dating, after-hours socializing, compliments, cursing, and politics,” Ms. Michael said. “Talking about politics at work creates a divisive work environment.” Becoming too close emotionally may be risky and can occur with the so-called “work spouse. I’ll ask a client, ‘Does your wife know you’re texting at all hours?’” she said. “And the client will say, ‘She wouldn’t understand.’ If you’re doing anything in secret, don’t be doing it.”

Harassment can occur not just by employers or coworkers but also by third parties like vendors, contractors, and patients. “All these people can create harassment of your employees,” Ms. Michael said, citing a case of a medical practice where a patient called an employee a racial epithet. “The practice said, ‘We can’t fire the patient; he is very sick, and we don’t have proof he did it,’” Ms. Michael relayed. “I said, ‘You don’t have to fire the patient, but the patient needs to know the behavior is not acceptable.’”

Ms. Michael explained that in legal terms, there are two types of actionable harassment: quid pro quo (“this for that”) and hostile environment.

The former occurs if tangible employment action follows the employee’s refusal to submit to a supervisor’s demands. Under federal law, an organization has no defense.

“The only response is to write a check,” she said, noting that such cases commonly involve a supervisor dating a subordinate, covertly. “Then the supervisor says they are not going to leave their spouse, the employee takes action, and alleges quid pro quo.” The Harvey Weinstein example falls under this category. “They all come down to abuse of power.”

To the orthopaedic surgeon in a position of authority, Ms. Michael said, “Your power as a supervisor is important. If you see something and you immediately take action to stop it, you are avoiding legal liability for the organization. You need to have taken reasonable care to prevent and correct the situation. You must notify the employees who are harassing.”

She advised her audience, “If you remember one thing, it’s ‘See something, say something.’” Citing the example of Matt Lauer, the Today Show host who was dismissed after allegations arose of sexual misconduct over a long period of time, Ms. Michael said, “NBC claims it didn’t know anything over 20 years. His behavior was captured on video [as] described by Katie Couric. It was allowing a culture of nonsense. Whether there was a complaint was not the test. If you see a behavior that is one of the never-evers, you should be taking action to stop that behavior, even if no one is complaining, because that is not the test.”

In the medical organization context, Ms. Michael noted that standards of behavior are covered by the Code of Medical Ethics and Professionalism for Orthopaedic Surgeons, and The Joint Commission has issued recommendations for implementing a code of conduct and a process for managing disruptive and inappropriate behavior.

Overall, she said, “We have to get out of the cone of silence. It is an ongoing, ever-changing discussion we need to have with our employees, over and over again, because if left unchecked, we get lazy.

“Develop your own personal game plan,” she advised. “What are you going to do to make sure you model those behaviors that are appropriate at work? If you are a leader, what is your action plan? It might be a hard transition; it might take time. Use good judgment. Treat people with dignity and respect. See something, say something.”

She continued, “Like athletes who are coached to be ‘game ready,’ we don’t want employees to be distracted by things like a stalker. We cannot solve all these problems, but what we are in a position to fix, we should try our best to fix. Don’t we want our employees to be the best they can be?”