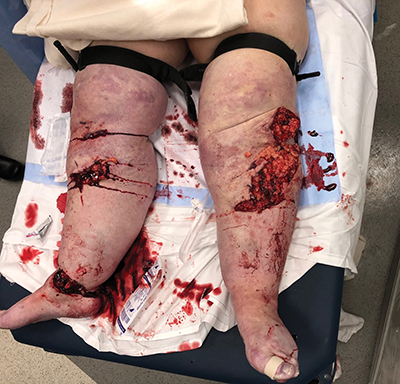 Bilateral tourniquets prevented life-threatening exsanguination in this patient who had been in a motor vehicle collision.
Courtesy of Michael J. Weaver, MD

Trauma Tips for the Orthopaedic Surgeon

Editor’s note: This concludes a two-part series reporting on “Top Tips” Instructional Course Lectures from the AAOS 2019 Annual Meeting. Part one appeared in the May issue of AAOS Now. Visit www.aaos.org/aaosnow to read more.

When feasible, patients with such injuries and associated complications should be transported to a Level 1 trauma center, but orthopaedic surgeons in other settings may find themselves handling these challenges. For example, said Dr. Weaver, “Unless you are in a Level 1 trauma center, you might not see pelvic fractures frequently, but given how ambulance services work, these patients may be dropped off at your hospital, and you want to know what to do in the first couple of minutes.”

Dr. Weaver said the goals of treatment for a mangled extremity are, in order:

He said these steps follow words given to him by a mentor: “Life, limb, and then disability.”

Although these injuries present an urgent challenge, the surgeon should take a deliberate approach. “As orthopaedic surgeons, we often want to jump in and start fixing things, but with a mangled extremity, you want to step back and actually take time,” Dr. Weaver said. “Taking time is a theme; whenever you are in an emergency situation, you want to pause and know yourself.”

First, evaluate for vascular injury and the degree of soft-tissue injury. “The skeletal aspect is really not that important in the first 12 to 24 hours,” he said. Neurologic status should also be evaluated. “This may be a window where you can get a neurologic examination, which can be very helpful down the road in determining options, including whether limb salvage is possible,” Dr. Weaver said.

For hemorrhage, the first response is direct pressure. “Then pack the wounds,” he said, noting that these initial steps may be performed in the emergency department (ED).

Tourniquets were previously viewed as a last resort or “a forbidden thing,” Dr. Weaver said, but military experience has demonstrated their value in wider application. “Now we see people coming into the hospital with tourniquets on,” he said. In the operating room (OR), tourniquets “may not be your first option but may be appropriate for some mangled extremities.”

When applying a tourniquet, Dr. Weaver instructed, “Tighten it until bleeding stops, and mark the time of placement. The clock is ticking.” He noted that standby tourniquets now are stowed in some sports stadiums, where vendors are trained in their use. “You might want to carry one in your car,” he advised.

“Infection prevention involves early administration of antibiotics and thinking about taking the patient to the OR for débridement,” which should be “early and adequate (i.e., aggressive),” Dr. Weaver said.

Antibiotic protocols vary, “And we tend to undertreat rather than overtreat with antibiotics,” he said. “And don’t forget tetanus. It is a good idea to work with your ED to have a protocol for the routine administration of antibiotics for patients with open fractures.”

For low-grade/low-energy injuries, cefazolin alone is generally indicated. For high-energy injuries, “No matter how big the wound is, think about a broader-spectrum antibiotic,” he said, specifying ceftriaxone alone or a combination of cefazolin and gentamycin.

For wounds with soil contamination—“and not just farmyard”—the concern is Clostridium difficile infection, and metronidazole should be added to the regimen.

For patients who are allergic to penicillin and/or cephalosporin, vancomycin and ciprofloxacin may be given.

Early administration of antibiotics reduces the risk of infection. “The sooner you give them—as soon as they arrive in [the] ED, if possible—the more effective they are,” Dr. Weaver said.

With irrigation and débridement, “You want to expose the zone of injury,” he advised. “The biggest mistake I see in the treatment of open fractures is not being aggressive enough with débridement. Using the wound is not enough; you have to go big and open up everything. If you have a hematoma exposed to the outside world, Staphylococcus is following that hematoma everywhere, so you have to expose the entire hematoma and get rid of it. You must remove all contamination; it is not something you leave [and] come back to. Remove all devitalized bone fragments, but save any large pieces with cartilage. Use copious irrigation, and consider post-
débridement cultures.”

Addressing the third goal of stabilizing the skeleton, Dr. Weaver noted that in the ED stage, splinting helps reduce soft-tissue trauma. “In the OR, consider external fixation,” he said. “With mangled extremity, you don’t want to be thinking about internal fixation. We like to jump to plates and screws, because that’s what we do, but if the soft-tissue injury is really bad, we may want to temporize things and then come back. When you are doing external fixation, you want to keep it really simple, more so than in a less-urgent situation. In the trauma setting, all you really want is ‘traveling traction.’”

A fixator pin should be placed “way away from the zone of injury.” In dressing wounds, “Also keep it simple,” Dr. Weaver said, with wet to dry dressings and vacuum-assisted closure. For a large, open, contaminated wound, Dr. Weaver uses a bead pouch, “Although this takes time.”

Other injuries and circumstances that carry risk for this complication are crush injuries, constrictive dressings, bleeding, and, increasingly, intravenous drug use.

The traditional “five Ps” (pulse­lessness, pallor, paresthesia, paralysis, and poikilothermia) are not reliable diagnostic criteria. “These are hard signs of a vascular compromise; they are late signs or signs of an arterial injury,” Dr. Weaver said. “The real sign for compartment syndrome is pain [that is] out of proportion to the injury, particularly with passive stretch. Repeated calls for increased medication overnight may indicate compartment syndrome; this is particularly true in children.”

Compartment syndrome may also rarely occur without pain. “The patient has a tibia fracture, it is nailed, and it seems fine; they are wiggling in their toes in the morning,” Dr. Weaver posited. “But in the afternoon, they have a foot drop or can’t bring up their great toe. You have to think hard if there is something going on.”

In equivocal cases, compartment pressure should be measured. “If the difference between the systolic blood pressure and the compartment pressure is less than 30 [mmHg], you need to consider a release. It’s not binary; if someone doesn’t have that when you examine them, that doesn’t mean you are in the clear. If the patient is at risk, you need to keep seeing them. Make sure someone is checking on them,” he said.

When compartment release is indicated, “you want to go big,” Dr. Weaver said. “The common error is inadequate release. You don’t need to apologize for the scars in compartment syndrome to fully release the muscle and the pressure.” It is important to ensure all the compartments are adequately released.

Knowledge of the anatomy—three compartments in the thigh and four in the leg—is essential, he said, in performing complete release.

In treating a patient with pelvic fracture, the surgeon should first “fall back to ABCs—airway, breathing, circulation,” Dr. Weaver said. “These are poly-trauma patients; they have a lot of injuries, including head injuries. They are at risk of exsanguinating.” Pelvic injury may be open, but it also may be occult, in the vagina or rectum, he noted.

Radiographs are needed for any patient with blunt trauma who is unstable or with suspicion of pelvic injury. In evaluating injuries, the clinician should take a systematic approach. Dr. Weaver noted that in the pretzel-shaped pelvis, “There are always two injuries—one in the front and one in back.” The clinician should first examine the symphysis, the most common site of fracture. “Then inspect the superior and inferior pubic rami,” he instructed. “Every anterior pelvic ring injury is going to involve the pubic symphysis or the rami. That is where most of the displacement [occurs].”

Then the sacroiliac joint should be evaluated, which may be “somewhat difficult to see on an anteroposterior pelvis image,” Dr. Weaver noted. Next, the sacrum should be assessed: “Every posterior injury is going to have either a sacroiliac joint injury or a sacrum injury.”

Finally, he instructed, “If you follow up [the] iliopectineal line, it should intersect with the bottom of the S2 neuroforamen. That is a useful landmark because, if it is disrupted, you know that the anatomy of the pelvis is distorted.”

CT scans, Dr. Weaver said, are useful for evaluating subtle injuries and planning definitive fixation, “But they are really not necessary for the first 12 or 24 hours of caring for someone with a bad pelvic fracture. All you need to know is: Where is the injury in the front? Where is the injury in the back? And what is the shape of the pelvis so that you can deal with it?”