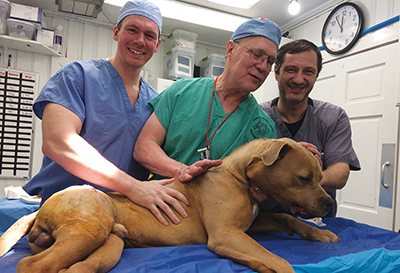 John Keating, MD, is an Atlanta-based orthopaedic surgeon whose love for animals has led to the creation of Surgeons for Strays, a 501(c)(3) nonprofit dedicated to the healing of injured stray animals who would otherwise face continued pain—or euthanasia. Surgeons for Strays treats animals that are found outside or are being housed in neighboring shelters. Without surgery, the animals would otherwise be unadoptable due to the steep costs associated with necessary surgeries.

Today, Surgeons for Strays has helped heal approximately 70 dogs and cats, but it all began with just one dog.

A local veterinarian reached out to tell Dr. Keating about a homeless dog with paw deformities. The dog had orthopaedic injuries, including crippling congenital contractures in her front legs that forced her to walk on her knees. The vet seemingly had no choice but to euthanize her, but he told Dr. Keating that “this dog is in love with life” and “too wonderful to put down.” They decided to call the dog Spirit.

Dr. Keating helped perform the operation, and Spirit was subsequently adopted by her forever family. At the time, Dr. Keating had no way of knowing what he had started. “It was a happy one-time affair … a good thing to do,” he recalled—or so he thought.

Several years later, Dr. Keating received a call from his sister-in-law, an attorney specializing in animal rights, who was handling cases on dog fighting and animal cruelty. “She said Fulton County Animal Services had a dog that has a broken leg. … They were going to put it down,” Dr. Keating shared. He agreed to help, along with veterinarian Michael Good, DVM.

The initiative took off when Dr. Keating was on his way to operate on an animal and ran into an Atlanta Medical Center orthopaedic resident who asked to join the operation. “As time went on, more people got our names and would contact me with homeless pets that had broken bones,” he said. And as more residents became eager to join—even sneaking out to assist Dr. Keating and other doctors—he wasn’t sure how well the program would be received. “I thought, ‘We have to keep this quiet [from the residency program director],’” he recalled. However, when the program director got wind of it, he asked Dr. Keating to help a homeless, injured cat. 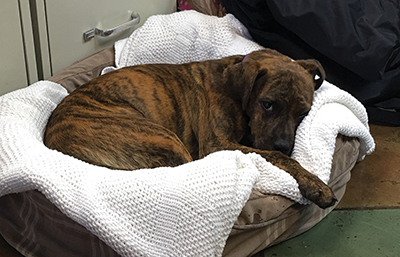 This dog had a nonunion femoral fracture but can now run and jump with her forever family post-surgery.
Courtesy of John Keating, MD

What started as a job done in secret has now graduated to an official part of the Atlanta Medical Center orthopaedic residency program: “When students are applying for residency, they see this as part of the presentation as something residents routinely do,” Dr. Keating explained. And participation has been beneficial to the residents on another level: “This is making all of [the residents] better people,” Dr. Keating said, adding, “That’s the point of all this.”

Some veterinarians were suspicious of the nonprofit’s mission; however, Dr. Keating emphasized that the work of Surgeons for Strays in no way takes business away from veterinarians. A veterinarian is always present during an operation. “We’re not pretending to be [veterinarians],” Dr. Keating said. “We don’t [operate on] any pets with owners. The only animals we fix are the animals who have no options—except euthanasia or limping around.”

Surgeons for Strays is a collaborative effort that includes residents; local animal shelters; and orthopaedic surgeons and veterinarians who donate their time, operating space, and expertise to help animals who would otherwise be euthanized. After surgery, the animals are returned to a shelter or organization for adoption.

The most common orthopaedic procedures Dr. Keating sees are long-bone fractures and hip fractures. Two of his most difficult procedures were a dog with a tibial plateau fracture and a dog with a pelvic fracture.

Dr. Keating and his team continuously do research ahead of cases, even for procedures they have done numerous times. Although they do consult YouTube and anatomy books, the team mostly relies on the expertise of James Cook, DVM, PhD, OTC, OTSC, for guidance.

A major difference between Dr. Keating’s human patients and furry ones is that the animals heal much faster. “They heal like children,” he said. Otherwise, the surgeries are similar. However, the animals are not splinted the same way as people, and there is also no postoperative physical therapy.

Dr. Keating said he receives Christmas cards and photos from families who adopted animals who were operated on. Surgeons for Strays not only saves the lives of
animals, it also allows the surgeons to get back to what really matters in health care, which is to simply help creatures, he said. The medical profession can be “dehumanizing” at times, but working with Surgeons for Strays allows the whole team to get back to their passion. “It is the most glorious thing we do,” Dr. Keating said. “It’s the reason we went into medicine.”