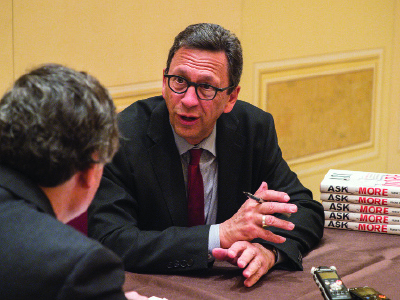 Frank Sesno, the presidential guest speaker at the AAOS 2019 Annual Meeting, sat down with Stuart J. Fischer, MD, for a one-on-one interview covering a variety of topics, including “the art of the interview.”

Distinguished journalist Frank Sesno was the presidential guest speaker at the AAOS 2019 Annual Meeting. Mr. Sesno’s impressive journalism career spans more than three decades and has taken him around the world.

Well known as an anchor, White House correspondent, and talk show host with CNN, he is also a nationally renowned moderator who has engaged some of the world’s leading personalities. Currently, Mr. Sesno is director of the School of Media and Public Affairs at George Washington University in Washington, D.C., where he leads close to two dozen staff members and teaches classes on journalism ethics, documentaries, sustainability reporting, and “the art of the interview.”

During the AAOS 2019 Annual Meeting, Stuart J. Fischer, MD, sat down with Mr. Sesno to discuss career dos and don’ts, the power of a question, and more.

Dr. Fischer: You wrote a book titled “Ask More: The Power of Questions to Open Doors, Uncover Solutions, and Spark Change.” Why did you write the book?

Mr. Sesno: I’ve been asking questions all my life, and I have realized that they bring discovery, joy, and connection in ways that we don’t think of often. In addition, we don’t actually teach or study this. There is a discipline to the chain of inquiry, the questions we ask, the way we frame them, the way we listen, and the way we follow up. I also think that being curious and asking people questions is a way of connecting and building trust and empathy, which we desperately need in the world today.

Dr. Fischer: Doctors need to have empathy as part of the profession. What questions should a doctor emphasize when first meeting a patient?

Mr. Sesno: An open-ended question that invites someone to set the agenda is a great opening question: “How you doing? What’s going on? Why are you here?”

If someone gives a hint, do you pick up on that? If someone gets emotional and there’s an awkward silence, do you let that silence hover for a moment and explore it, or do you move on because it’s uncomfortable? It is important to understand how to probe a person in a way that may shed light on their situation or condition.

In my book, I tell a story about a nurse practitioner in Appalachia who had a patient who was basically in diabetic shock by the time she came in. She was very sick, but she didn’t want to talk about what was going on because she was ashamed. The patient and her father were very low income and, despite working, couldn’t afford their diabetes medication. She and her father were sharing medicine, so neither were very healthy. Once the nurse knew what was going on, she could craft a strategy so it didn’t happen again.

Dr. Fischer: In the book, you quote Helen Riess, MD, of Harvard University, and mention that, nowadays, doctors have their eyes on the computer screen. Some argue that patients like this; it shows that you’re writing everything down and prompts them to give more. That is contrary to everything we’ve been taught. What’s your take on that?

Mr. Sesno: Especially in the digital age, people are accustomed to things being written down. I think it depends on how it’s done, though. If you are only staring at your computer and talking to the patient out of the side of your mouth, I don’t think the patient is going to find that a very rewarding experience.

I don’t advocate that we should throw the computers out, because they are a vital tool. It’s about how we use the tool. There’s a way to use it and be more responsive to the human being in the room.

Dr. Fischer: You’ve interviewed many important people. What was your best interview?

Mr. Sesno: I don’t know about best, but I’ve had several interviews where I felt the people were very brave. One example was when C. Everett Koop, MD, was made surgeon general at a time when HIV/AIDS was exploding in this country. I had a show on CNN at the time, and Dr. Koop was my guest. He started talking about the need to understand the disease, how it was transmitted, and the need for safe sex. At the time, I had never heard a conversation about safe sex on television before. It was very upsetting to some people who had confirmed him as surgeon general, but he said, “This is not a political issue. This is a public health issue, and we need to address this.” And that was a remarkable moment.

Dr. Fischer: What is the best single question you’ve asked?

Mr. Sesno: I tried to ask President George H.W. Bush a question two days before reelection day in 1992. I flew out to La Crosse, Wis., where he was campaigning, and I asked about a controversial story that was in the news. He didn’t want to talk about it. I asked several times, and he didn’t answer. Finally, he looked at me and said, “Are we going to talk about anything else?”

He canceled all his other interviews after that. He was displeased with me, but I had a job to do, and it was not a popularity contest. I do not believe I was being disrespectful, but I was being persistent.

Dr. Fischer: Is there a question you’ve asked that you wished you could take back?

Mr. Sesno: I’m not sure I would take it back, but I wish I would have come at it differently. Several years ago, in front of a live audience, I was interviewing Yasser Arafat, then head of the Palestinian Liberation Organization. It was during the time of the Intifada, one of the uprisings. It was a particularly ugly time because people were getting killed. There was a lot of criticism around the world for Mr. Arafat to speak up and tell kids to stay inside and tell them they are not propaganda tools. But he wouldn’t do it.

I basically asked, “Why aren’t you doing this?” He exploded at me. I thought he was going to walk out, so I repositioned myself so he couldn’t walk out. He did sit back down, and we carried on, but I didn’t come back to that question. I regret not coming back at him, because the question was real, and there were a number of ways that I could have followed that up.

Dr. Fischer: There have been several instances where journalists have become historically part of the story. Is there a role for journalists to participate, and what do you tell your students about that?

Mr. Sesno: I do not think it’s appropriate for journalists to participate in a political process.

However, I’ve had situations where, because I know parties from both sides, they might ask me to make an introduction. I’m happy to do that, but my job as the journalist is not to shape history or events. My job is to report those events. I think that our job is to be straightforward with the facts. I think people don’t fully appreciate—and this concerns me—that the most important role of a free press is to hold people in power accountable.

Dr. Fischer: You have been teaching journalism for a long time. How is teaching different today than from many years ago?

Mr. Sesno: It’s probably a lot like medicine. A lot has changed. The technology, audience, expectations, and business model have changed, so you have to reflect that. I think we teach much more entrepreneurship and creativity today in storytelling, because we have to. People don’t just wait for the newspaper to land on the doorstep anymore. People are getting information online all the time.

But certain things have remained constant: accuracy, verification, capturing a story in a concise and clear way, having an ethical framework, and understanding that your first obligation is the truth.

Dr. Fischer: You have an interest in the environment, and you created Planet Forward. How did it get started?

Mr. Sesno: I started Planet Forward 10 years ago. It’s a multimedia platform where we engage students from across the country to be storytellers about the ideas and innovations that will move the planet forward. We’ll soon have 10 billion people on this planet. How will we feed these people? Where will the water come from? How will we house these people? How will we do this without having refugees due to drought, famine, or climate change? That responsibility and challenge falls to this generation, and that’s what Planet Forward is about.

We gather every year at a Planet Forward summit, and we have the students interact with leaders in business, government, media, and science.

Dr. Fischer: What can surgeons do to move the planet forward?

Mr. Sesno: Surgeons can continue to make the unbelievable strides and breakthroughs that they have done. Think of how medicine has changed over the last 10 to 50 years. It’s just breathtaking.

Surgeons need to continue to relate on a very real level with their patients. I think everyone in the healthcare system has to join this discussion about American health care. It is very complicated.

Stuart J. Fischer, MD, practices at Overlook Hospital in Summit, N.J., and the Center for Ambulatory Surgery in Mountainside, N.J. He is the editor-in-chief of OrthoInfo.org and is a member of the AAOS Now Editorial Board.