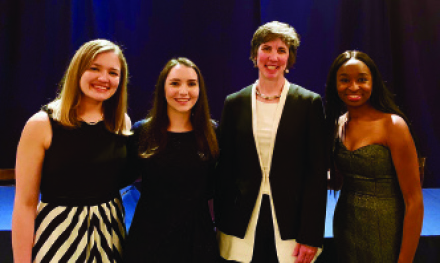 (From left) Medical students from the University of Maryland, Leah Henry and Kali Stevens, take a photograph with Kristy L. Weber, MD, and Rolanda Willacy, MS3 (moderator), following the dinner.

In 2017, I created the annual event with the vision of honoring women who paved the way in orthopaedic surgery. The event also serves as a space for inspiration and candid conversation, as well as an opportunity to provide a different idea of what the orthopaedic surgery field could look like. Additionally, the dinner serves as an innovative way to increase the representation of women in the specialty, which is only 6 percent female.

Alexis Sandler, a George Washington (GW) University medical student, introduced Dr. Weber, who gave the opening address. One theme from Dr. Weber’s speech was the importance of finding mentors and sponsors. She noted her own mentors—Joseph A. Buckwalter IV, MD, MS, and Stuart L. Weinstein, MD, both of the University of Iowa, and Franklin H. Sim, MD, of Mayo Clinic—who have provided advice about cases, leadership, and opportunities throughout her career.

In her final thoughts, Dr. Weber cited two individuals—Ruth Bader Ginsburg and Oprah Winfrey—who paved the way for women, but who were initially dismissed. She shared, “Don’t be afraid to be who you are. They were women, and they were professionals, and we have to be able to be both. We can’t just capitulate to the culture. We have to step up and be who we are.”

Dr. Tosi initially began her training in internal medicine and, after realizing that was not the career path for her, decided to retrain in orthopaedic surgery.

“I am so glad that I made that decision. I love being an orthopaedic surgeon and the opportunities it has given me,” she said.

Dr. Niu said her interest began when she did an orthopaedic elective as a third-year medical student. Although she hadn’t considered the path before, Dr. Niu noted that it was “something that was tangible. It was the first time I didn’t mind having to wake up early, and I did extra reading outside of the rotation.” This led her to realize it was the right path.

Dr. McLaurin shared a similar experience: She was required to do two months of a surgical subspecialty. “I thought I wanted to do neurosurgery, but I did orthopaedics first. I liked orthopaedics, but women don’t do orthopaedics. … I guess this woman is going to do orthopaedics, because that is the only thing that I liked. I can’t imagine anything else that I would be doing.”

Many of the panelists discussed the role of mentorship in the development of their career paths, and a common theme was the important role male orthopaedic surgeons play.

(From left) Medical students from the University of Maryland, Leah Henry and Kali Stevens, take a photograph with Kristy L. Weber, MD, and Rolanda Willacy, MS3 (moderator), following the dinner. 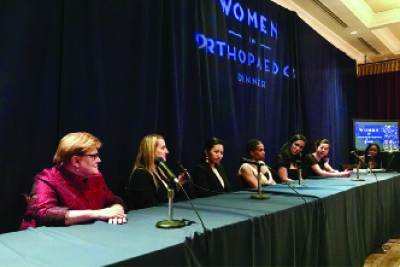 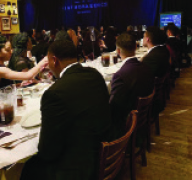 Students listen attentively to the panel discussion and ask questions of attendings and residents.
Courtesy of Dwayne Willacy 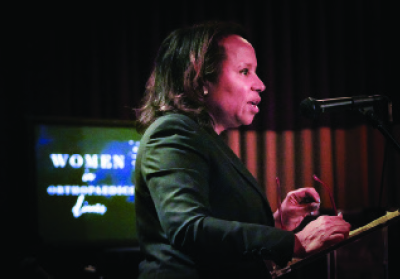 Dr. Tan addressed mentorship in light of the “Me Too” movement and shared critical advice: “What’s helped me is to have a direct question that I want to ask. If I had an attending who did something that I really admired in the operating room, that’s a great question that can lead into a conversation about how they developed that soft skill.”

The panel also discussed factors that deter women from pursuing orthopaedic surgery. Dr. LaPorte said, “There are fantastic role models, but there just aren’t enough. There are still programs that don’t have women faculty. Sometimes, if you don’t see somebody [who] looks like you, you’re not sure [it is] something you can do.”

“I’m blessed that our program is really always at 50 percent female [or] pretty close to that,” said Dr. Clark. “I think that meetings like this allow us to see that there are all shades of brown included in orthopaedics, and that [will] help to dispel misconceptions.”

Susan Stephens, MD, an orthopaedic spine surgeon, delivered the Keynote Address: “If you’re in this room right now, you’re halfway there.” She shared her journey growing up with a father who was an orthopaedic surgeon and a mother who was a pediatrician. “I did a spine fellowship at the Cleveland Clinic, and then I went into private practice, because I never wanted to do the academic track. I wanted to have more control of my voice, and I wanted to use my voice.”

One of the major themes Dr. Stephens discussed was how students can use their voices to speak about the important issues in this world.

“You’re going to have to figure out how to take some risk to stick up for your sex, nationality, diversity, politics … something.”

Finally, Dr. Stephens shared a slogan from her son’s presidential campaign at Dartmouth University: “You first! [That means] stand up for yourself first; you lead, you learn, you innovate, you interact, you intervene, you get involved, [and] you educate. You stop things that you think are wrong, you start things that you think are right, you speak up, [and] you talk about uncomfortable topics like race, gender, [etc.]. You’re a physician, a medical student, [and] an influencer. You need to stand up for your patients, your values, and those who are less fortunate.”

The dinner concluded with an award presented by medical students at Howard University, GW University, and the University of Maryland to the 2019 Mentorship Honorees—Dr. Tosi and Bonnie Simpson Mason, MD. Drs. Stephens and Weber were also honored for their contributions to the dinner. Students also received an opportunity to network with residents and attendings to garner valuable resources.

I encourage my colleagues to continue to have conversations and promote diversity in the specialty of orthopaedic surgery. Collaborating with nearby institutions is another way to encourage women and minorities interested in this specialty by sharing resources and gaining access to mentors and opportunities.

Rolanda Willacy, MS3, is a research fellow at Children’s National Medical Center and Howard University Hospital and a medical student at Howard University College of Medicine. She is the founder of the Women in Orthopaedics Dinner.