Fig. 1 Normalizing poor squat mechanics, which are often present in young female athletes, is an important component of patellofemoral rehabilitation.
Courtesy of Elizabeth A. Arendt, MD

Patellofemoral Injury Is Not a ‘Female Disease’

Dr. Arendt, of the University of Minnesota, said the level of understanding of patellofemoral injury is “a little ahead of the shoulder but probably not up to what we know about the anterior cruciate ligament” (ACL).

She noted that patellofemoral injury is thought to be “a female disease” but said, “I’m not sure I believe that. For first-time dislocations, there are several studies that say that the incidence is nearly the same for males and females.”

One meta-analysis of first-time lateral patella dislocation (LPD) in 70 patients showed a distribution of 46 percent male and 54 percent female, with an average age of 24.5 years. In a cohort of 235 patients at Dr. Arendt’s institution, the distribution was the same; the mean age was 21 years.

In another study, which included more than 300 patients, the primary mechanism of injury was noncontact, constituting 73 percent of dislocations. LPD “peaks in teenage years,” Dr.
Arendt said. Overall, she said, “nearly all studies” reporting on first-time patella dislocations classify the injuries as traumatic and not syndromic, and incidence is approximately equal among males and females.

It is in recurrence of LPD that higher numbers of injuries are seen in females, Dr. Arendt said. The reasons are not clear, but possible explanations are neuromuscular factors of faulty body mechanics (Fig. 1) and of lower knee flexion angles, greater knee valgus angles, and greater quad activation in female athletes. A possible anatomic explanation is the higher prevalence of dysplastic distal femora among females.

Fig. 1 Normalizing poor squat mechanics, which are often present in young female athletes, is an important component of patellofemoral rehabilitation.
Courtesy of Elizabeth A. Arendt, MD 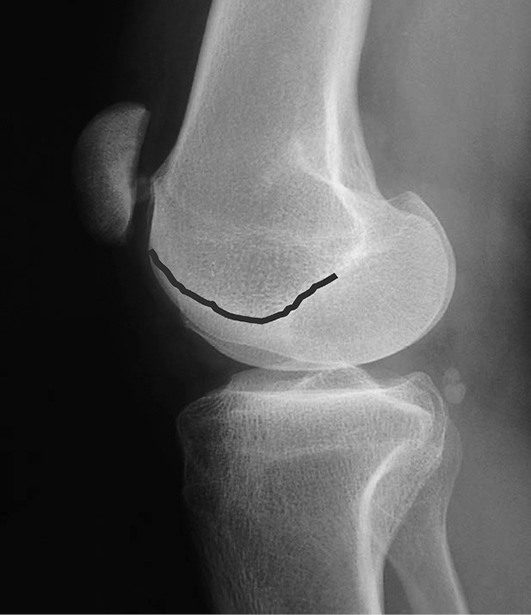 Fig. 2 A lateral radiograph of a knee with trochlea dysplasia. This anatomic variant is a risk factor for both patellofemoral instability and isolated patellofemoral arthritis.
Courtesy of Elizabeth A. Arendt, MD

In regard to anatomic risk factors as indicated by imaging, a study found that trochlear dysplasia and patella alta > 1.2 are the two anatomic patellar risk factors most prevalent in first-time lateral patellar dislocations.

One study from Dr. Arendt’s institution supports a high probability of recurrent LPD when the following are present:

“We do know that open growth plates, patella alta, high-grade trochlear dysplasia measured in a couple of different ways, and contralateral patella dislocation are all indicators of high probability of recurrence,” Dr. Arendt said. “In studies now that have looked at it—and there are six in the literature—sex has not been a variable, but sex may be an indirect variable because women have these risk factors more than men. Sex in and of itself as an independent factor did not increase the risk of redislocating.”

She concluded: “The thing I want to emphasize is that we can characterize anatomic factors associated with the first-time dislocation, but we don’t know when these factors should be surgically corrected or at what threshold these should be corrected for the best results. That’s the Holy Grail that everybody’s seeking. We do think that elevated TT-TG distance is less important. These are just a couple of studies that talk about it, and it looks like trochlea morphology is the bigger anatomic risk factor, so maybe we don’t have to look at TT-TG so carefully in our surgical management.”