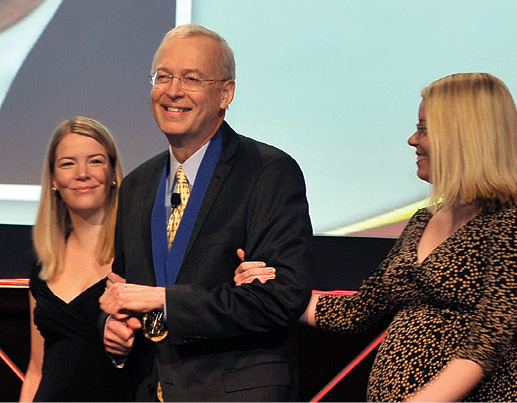 At the AAOS 2012 Annual Meeting in San Francisco, John R. Tongue, MD, was escorted onto the stage by his two daughters, Laura and Lisa, as he assumed the presidency of the Academy.

John R. Tongue, MD, the Academy’s 2012–2013 president, passed away Aug. 25 in Lake Oswego, Ore. He was 73, and he died peacefully in his home with his wife, Nancy, at his side, according to a statement from the Oregon Health and Science University (OHSU) School of Medicine, where he was a clinical associate professor of orthopaedics and rehabilitation.

Among his many contributions to the profession and public health, Dr. Tongue will be remembered as an unapologetic “roadway warrior” whose longtime advocacy for traffic safety germinated from the rollover car crash he survived as a teenager because he was wearing a seatbelt. He helped enact a statewide safety-belt law that greatly reduced vehicular fatalities and injuries in his home state of Oregon.

Dr. Tongue and then-nursing student Nancy Klein were married on March 20, 1976, and together they set up an office in Lake Oswego, according to the OHSU remembrance. He later moved his practice to Tualatin, Ore., and operated at Meridian Park Hospital for 40 years. Dr. Tongue was an avid outdoorsman who reveled in Oregon’s natural beauty and especially in fly-fishing its waterways. He summited Mount Hood with each of his three children, and he led Boy Scouts on wilderness expeditions.

In recognition of his efforts to reduce roadway crashes and injuries, including his leadership on AAOS initiatives to educate the public about the threats posed by distracted driving, he received the AAOS Humanitarian Award in 2003, the National Highway Traffic Safety Association Public Service Award, and the Oregon Medical Association’s Doctor-Citizen of the Year Award.

As an orthopaedic leader, Dr. Tongue took pride in giving a voice to surgeons who “hang their own shingles.” Dr. Tongue’s assumption of the presidency in 2012 capped more than two decades of experience as an AAOS volunteer in a variety of roles, along with service in other national societies and regional and state associations.

“We orthopaedic surgeons have the best specialty in medicine,” he said in his address to assume the AAOS presidency at the AAOS 2012 Annual Meeting. “We help everyone—people of all ages, backgrounds, and lifestyles. Being able to improve people’s quality of life is a very positive experience.” Ascending to the Academy’s top volunteer leader position “is the icing on the cake of a successful career,” he said. “It’s an opportunity to make a difference, for each of us to do something meaningful, to learn new things, and to grow. Giving back is a great privilege.”

In addition to advocating for roadway safety, improving communication between patients and orthopaedists was a passion of Dr. Tongue’s, and he led workshops for fellow surgeons, teaching skills for building trust and understanding between patients and physicians. “Fitting the treatment plan to the lifestyle of each individual patient is the real challenge,” he said. “Our patients don’t want to be the ‘left shoulder in room 2.’ They want to be our partners. We’re making progress on that.”

Daniel J. Berry, MD, who immediately preceded Dr. Tongue as Academy president, commented, “During his term as the Academy’s leader, “Dr. Tongue was a great advocate for our orthopaedic patients. And throughout his career, [Dr. Tongue’s] tireless advocacy for road safety had an immense influence in his home state of Oregon and nationally. We shall miss greatly his earnest and thoughtful presence.”

AAOS President Kristy L. Weber, MD, FAAOS, commented, “I admired Dr. Tongue for the passion he had for AAOS, for seatbelt and other safety issues in Oregon, and for his family.” Noting that Dr. Tongue persevered through eight years of living with sarcoma tumors, up to the time of his passing, Dr. Weber said, “The courage [Dr. Tongue] showed to go through treatment for his disease while he was in the AAOS Presidential Line was nothing short of heroic. He always had something positive to say and lived each day to the fullest.”

David A. Halsey, MD, 2018–2019 AAOS president, had these words for his friend and colleague: “Dr. Tongue, always the leader, always focusing on the needs of others, encouraging the best from your fellow citizens: Rest now, my friend, and fill your heart with the love of all those you have touched.”

In addition to his wife and his three children, Christopher, Laura, and Lisa, Dr. Tongue is survived by two brothers and five grandchildren. A service was held in September, and memorial donations may be made to the Orthopaedic Research and Education Foundation and the Oswego Heritage Council.