The above radiograph is an example of a fragility fracture.
Courtesy of Andrew M. Schwartz, MD

On May 15, the Senate Special Committee on Aging issued a Request for Information (RFI) on reducing the risk of falls and fall-related injuries and prominently cited the impact of hip fractures following falls. The Fragility Fracture Alliance (FFxA), which AAOS launched in 2014 and has grown to include many other clinical professional organizations, responded, affirming the significance of this public health issue and making recommendations to improve the care of those who have experienced falls, fall-related injuries, and fragility fractures.

FFxA also expressed support for future efforts to develop an osteoporosis condition-based bundle or hip fracture bundle as the Centers for Medicare & Medicaid Services considers alternative payment models and condition-based bundles to improve outcomes and lower costs. Given the positive legislative and current regulatory environment, there is now a unique opportunity to make real headway on this issue.

Since December 2014, AAOS has recognized osteoporosis and bone health in adults to be a national public health issue. AAOS released two position statements related to the issue and launched FFxA, a group of like-minded orthopaedic organizations involved in the prevention, care, and treatment of osteoporotic fragility fractures. Since its origin, FFxA has grown to include the American Geriatrics Society, American Orthopaedic Association, International Geriatric Fracture Society, National Association of Orthopaedic Nurses, Orthopaedic Trauma Association, and United States Bone and Joint Initiative.

FFxA vision for the future

FFxA seeks to coalesce the various voices involved in this space. Through a concerted and unified advocacy agenda, patient-safety initiatives on osteoporosis and fall prevention can be undertaken, guided by AAOS and FFxA member organizations’ expertise in evidence-based care. The long-term goals of FFxA are to establish and gather registry data on the optimal care of fragility fractures, to mold policy regarding costs of fragility fracture care (to include fracture liaison services and best practices), and to determine the optimal time for medical intervention to prevent such fractures. With one voice, this is achievable.

The above radiograph is an example of a fragility fracture.
Courtesy of Andrew M. Schwartz, MD 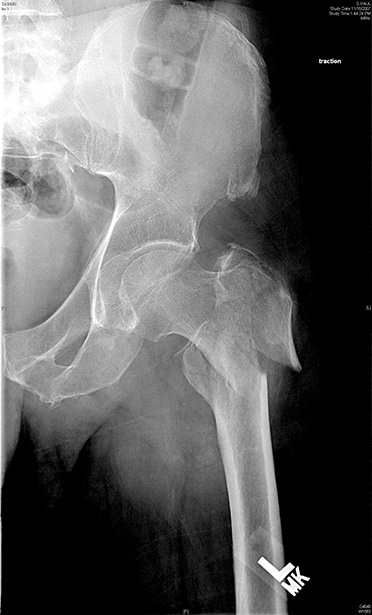 The above radiograph is an example of a fragility fracture.
Courtesy of Paul Tornetta III, MD

Keeping a nation in motion

It is through the efforts of FFxA, such as its response to the special committee’s RFI, that positive steps can be taken to improve the lives of older adults and keep our nation in motion. In 2014, a report titled “The Recent Prevalence of Osteoporosis and Low Bone Mass in the United States Based on Bone Mineral Density at the Femoral Neck or Lumbar Spine” found that 10.2 million older adults (aged 65 years or older) had osteoporosis and another 43.4 million older adults had low bone mass. The implications are staggering.

Of those who are aged 65 years or older, falls are the leading cause of unintentional injury death, with 31,190 cases in 2017 alone. More than 95 percent of hip fractures are caused by falls.

Furthermore, every year, more than 300,000 older adults are hospitalized for hip fractures. The combination of increased falls and osteoporosis can lead to increased frequency of fragility fractures, which are not isolated to the hip and include vertebral, proximal humerus, and distal radius fractures. Such circumstances can have fatal outcomes. Older adults who suffer from hip fractures have a significantly increased risk of mortality compared to their unaffected peers. Although mortality rates for other conditions have decreased over the past decade, hip fracture mortality remains high.

FFxA’s work to tackle this issue comes at a critical time. Improvements in prevention, care, and treatment are not only achievable but also necessary. From 2007 to 2016, older adults’ rate of deaths from falls has increased by 31 percent. The time to act is now. With willing partners, we can make real progress on this issue for patients, families, and our society.

Chris Naso, MPH, is a manager of health policy and regulatory affairs in the AAOS Office of Government Relations.