Editor’s note: This is part one of a two-part series on the use of low-level laser therapy for musculoskeletal pain. The second installment is also available online and will appear in the October issue of AAOS Now.

In July, the Food and Drug Administration (FDA) cleared the Erchonia FX 635, a low-level laser therapy (LLLT) device, for “whole body” pain. As a spine surgeon, I was aware that this technique was used in some patients with chronic low back pain but was always skeptical about claims involving lasers and diffuse pain. The truth: I did not know much about it. Given the likelihood of more widespread use, I investigated LLLT.

There are several good, basic primers on LLLT, including a review by Cotler et al., and a number of websites. Industry site and laser vendor ColdLasers.org offers some excellent practical and taxonomic information about LLLT. It notes that lasers cost $2,000 to $15,000, with a number of manufacturers selling disparate devices. A nice summary of the technology behind the recent FDA approval can be found on the National Institutes of Health’s ClinicalTrials.gov website.

Cotler and colleagues provide a history of LLLT extending to the 1903 Nobel Prize in Medicine, which was awarded to Dr. Niels Finsen for his work using concentrated light radiation in lupus vulgaris. Lasers were first described by Gordon Gould and built by Theodore Maiman around 1960. (Editor’s note: The invention remained controversial for decades; my parents were friends of Mr. Gould’s.) By the late 1960s, the first medical uses of lasers were described by the term “laser bio stimulation.” Today, the term photobiomodulation (PBM) is used. Some authors include LED therapies; others insist that only lasers, by offering a narrow wavelength, produce the effects needed.

LaserSafetyFacts.com reports that the devices are classified by their power output and, thus, the risks they pose. The site offers excellent tables discussing handling and dangers, as well as examples of the devices in each class. Class I lasers, such as those found in CD players, do not confer significant risk. Class II devices, such as many laser pointers, emit less than 1 milliwatt (mW) of energy and are generally considered safe unless directly pointed into the eye. Most LLLT devices are class III and emit as much as 500 mW. The broad power range confers a similarly broad range of potential risks as well. Class IV devices, sometimes referred to as “hot lasers,” emit more than 500 mW and are used in surgeries to cauterize tissue. Such devices pose risks to the eyes and skin from both their direct and reflected beams.

The relative safety of LLLT also includes the absence of collimation or beam focusing. In fact, lasers in the higher power ranges of class III purposefully defocus beams to about 30 degrees to allow wider treatment areas and to decrease the risks of focused laser energy. ColdLasers.org states that the 250 W (not mW) heat lamps employed by most practitioners have a greater tendency to burn patients’ skin. With all this, experts on such treatments note that power output, wavelength of laser light, and the presence or absence of pulsations can influence device efficacy—with huge ranges in devices, from small handheld systems available for home use to larger, more powerful units purchased by healthcare providers. ColdLasers.org notes that devices emitting wavelengths from 1,350 nanometers (nm) to 400 nm (in the blue spectrum) are available. For musculoskeletal uses, 800 nm to 860 nm devices are typically recommended.

After wavelength, dose is another concern. In a 1998 study, Tunér and Hode argued that in their review of 1,200 papers on LLLT, they found 85 positive and 35 negative double-blind studies. Among the negative studies, however, each utilized a suboptimal dose of laser energy, and therefore would not have expected positive results. In principle, dose should increase with the depth and size of the treatment area in question.

Both online and in the literature, two main applications of LLLT are described. Papers describing its use in small targets, 2 mm2 to 20 mm2, are said to affect distant sites along the body’s meridians, trigger points, acupoints, or lymph system that “control the problem area.” More typical in musculoskeletal practice are 60 mm2 to 250 mm2 target areas directly reflecting the affected tissue itself.

Given the depth of many perispinal tissues, a reasonable question is how deep will a laser penetrate? At 2 cm, 84 percent of a laser’s energy has been absorbed. At a given spectrum, more powerful lasers do not achieve great depths of penetration but, in transferring more energy to the patient, can achieve the desired doses, typically 4 joules/cm2 to 12 joules/cm2, more quickly. 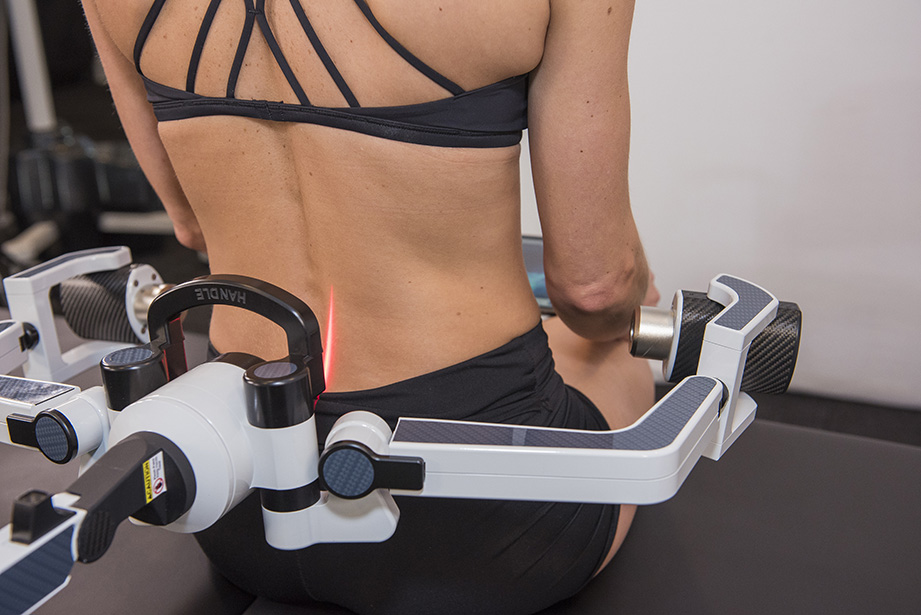 Initially, I assumed any effects of LLLT were similar to a hot water bottle, but experts specifically state that the “effect is photochemical, not thermal.” Erchonia, manufacturer of the recently approved laser system, stated that low-level lasers “communicate information to the receptors on the membrane of the cell and mitochondrion (the enzymatic engine of the cell). This energetic information reaches the cell’s DNA, which directly controls cell function. When the cells receive better information, they work better, as do the tissues they comprise, like bones, cartilage, tendons, ligaments, etc. In this way, LLLT promotes the healing and regeneration of damaged tissues, having both local effects on tissue function and also systemic effects carried throughout the body by the blood and acupuncture meridians. The key basic physiological effects of low-level laser light include increased cell membrane polarization and permeability; adenosine-5-triphosphate (ATP) production and respiratory chain activity; enzyme activity; collagen and epithelial production; capillary formation; macrophage (immune) activity; analgesic effects due to elevated endorphin production, electrolytic nerve blockage, and improved blood and lymph flow; anti-inflammatory effect due to improved circulation and accelerated tissue regeneration; and increased production of antioxidants. Of additional benefit is that light energy from low-level lasers will only be absorbed by cells and tissues that are not functioning normally and has no effect on healthy cells.”

Other laser marketers, such as Lightforce, describe PBM as a process during which photons “enter the tissue and interact with the cytochrome C complex within mitochondria. This interaction triggers a biological cascade of events that leads to an increase in cellular metabolism and a decrease in both pain and inflammation.”

Cotler and colleagues offer a more direct discussion, starting with the first law of photobiology: “For low-power visible or near-infrared light to have an effect on a biologic system, the photon must be absorbed by electronic absorption bands belonging to a photon acceptor or chromophore.” They identify several potential chromophores in human cells, including hemoglobin, myoglobin, and more, although cytochrome C oxidase (COX) is believed to be the primary photo-acceptor for red-NIR radiation in mammalian cells. They cite studies proposing that LLLT photo-dissociates nitric oxide from COX and thereby reverses the mitochondrial inhibition of respiration seen with excessive NO found in injured or hypoxic cells.

In the long term, LLLT stimulation of the mitochondria is thought to activate various transcription factors to increase the production of ATP, cAMP, and other molecules. That LLLT can impact cell proliferation seems clearer based on studies in fibroblasts, keratinocytes, endothelial cells, and lymphocytes. As orthopaedic surgeons, we must remember that the FDA labeling of LLLT in musculoskeletal care is for pain relief, not improved tissue healing, although laboratory studies do imply a benefit.

In truth, depending on your training background and the article in question, the purported mechanisms of action for low-level or cold lasers can range from reasonable to nonsensical. Among us, for example, readers will react to discussions of the impact of lasers on acupuncture meridians differently. As anesthesiologist Burt McKeag, MD, commented on the FDA approval, we do not have a clear sense of the mechanism of action for Tylenol or gabapentin in this patient population either.

As a spine surgeon, I am very aware of the limitations of modern medicine when it comes to certain types of pain, especially back pain and widely distributed “whole body” pain. LLLT has been around for years, but the new FDA approval spurred me to try to understand the theory behind the technique. The next installment will look critically at the data available for LLLT in orthopaedic applications.