The study, presented by Richard E. Campbell, BS, a research fellow at the Rothman Orthopaedic Institute, during the American Orthopaedic Society for Sports Medicine Annual Meeting, aimed to identify the prevalence of CD symptoms before and after shoulder stabilization, as well as the relationship between depression and functional outcomes, and to identify predictors of depression symptoms. The investigators hypothesized that patients with preoperative depression symptoms would have significantly worse shoulder function outcomes both pre- and postoperatively.

“Shoulder injuries, especially instability, can have a significant impact on patients’ quality of life,” Mr. Campbell noted. “The majority of our day-to-day activities require pain-free shoulder mobility. Furthermore, the majority of patients with shoulder instability participate in vigorous upper-extremity activities recreationally or vocationally. In addition to quality of life, the inability to adequately participate in these activities affects patients’ self-image. While some patients vocally expressed this decreased quality of life and self-image, we suspected that many other patients are quietly experiencing similar symptoms.”

The study initially enrolled 88 patients preoperatively, and 12 were subsequently excluded because the labrum was not surgically repaired—for a total of 76 patients followed postoperatively.

Potential participants were informed of the intent of the study but were not primed with introductory narratives about the association of musculoskeletal injuries with depression symptoms or the potential for depression symptoms to negatively affect surgical outcomes. To assess depression symptoms, participants completed the 16-item Quick Inventory of Depressive Symptomatology Self-Report (QIDS-SR) questionnaire preoperatively. Total scores on the QIDS range from zero to 27; a score of six or more indicates the presence of CD. Patients with a QIDS-SR score of six or more were assigned to the CD group, whereas patients with QIDS scores less than six were assigned to the non-CD group. The Western Ontario Shoulder Instability Index (WOSI) questionnaire was administered preoperatively to assess shoulder function.

Surgeries were performed by multiple surgeons at one private institution with multiple treatment centers. The prevalence of preoperative CD in the total cohort was 51.3 percent (n = 39), decreasing to 23.7 percent (n = 14/59) at one-year follow-up. QIDS-SR scores and CD prevalence at all timepoints are displayed in Tables 1 and 2 and Fig. 1. 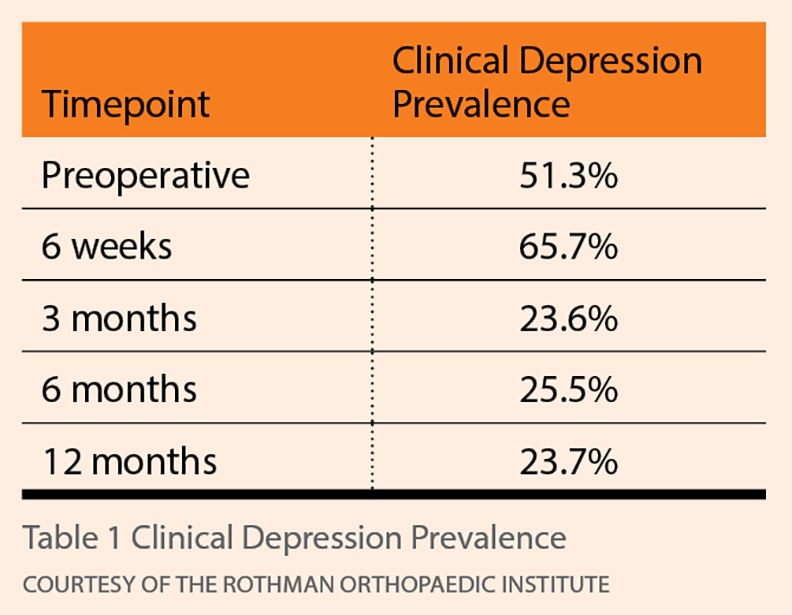 Function and depression: a link?

Orthopaedic surgeons should consider screening patients who present with debilitating musculoskeletal injuries using standardized methods (QIDS-SR, HADS, etc.) and should refer patients who endorse CD symptoms to a psychiatrist or psychologist for evaluation, the authors advised. Mr. Campbell said that one approach would be for orthopaedic surgeons to implement validated CD questionnaires into their practice. “This could be done at multiple levels,” he said. “The first would be to incorporate a brief depression screen such as the Patient Health Questionnaire-9 into new patient or new problem intake forms. Another option would be to ask medical assistants or nursing staff to administer these questionnaires when placing patients in rooms. Finally, physicians can mention the effect of mental health on postoperative outcomes during preoperative counseling and screen patients at that time.”

Commenting on the study’s limitations, Mr. Campbell said: “Unfortunately, due to the design of our study, we cannot make firm conclusions about the causative relationship between depression symptoms and shoulder function. Another limitation is that patients lost to follow-up demonstrated worse preoperative depression scores. Therefore, the incidence of postoperative CD may be greater.”