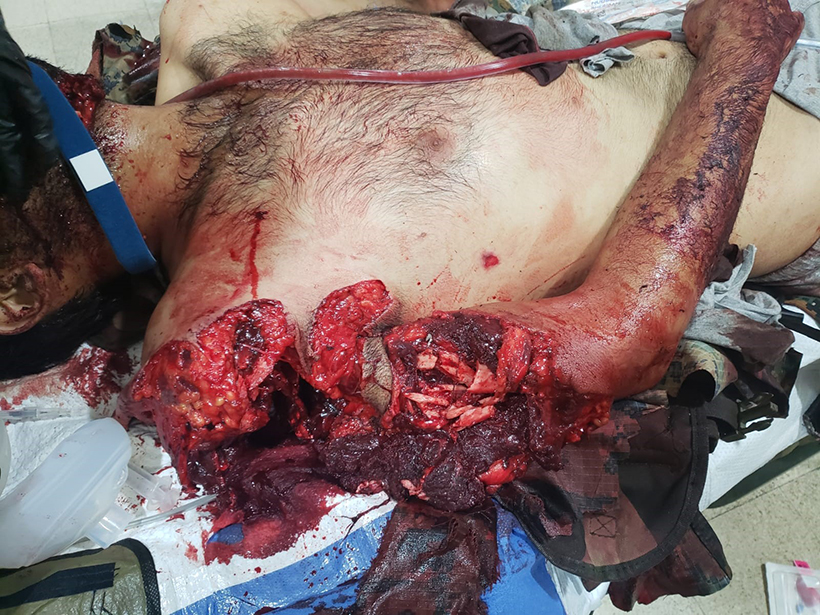 Fig. 1 A clinical image of a patient who sustained a near amputation of the left arm after detonation of a vehicle-borne improvised explosive device. The injury required revision forequarter amputation.
Courtesy of K. Aaron Shaw, DO, MAJ

Battlefield surgical care has evolved from its famous portrayal in the 1970s war comedy-drama television series M*A*S*H, which brought Army medicine to family rooms of everyday Americans. In-depth analysis of the medical care provided over periods of prolonged conflict has identified areas for quality improvement. One point of focus to improve access to surgical care has been to move some services away from the resource-intensive hospital setting. Instead, the trend has been to create multiple small, mobile surgical teams and locate them at forward-deployed locations.

The Forward Surgical Team (FST) was the initial configuration introduced in 1997, consisting of 20 medical providers, usually including three general surgeons, one orthopaedic surgeon, two anesthesia providers, and nursing and operating room (OR) staff. The FST was designed to be split into two surgical teams that would operate in separate locations. The teams were intended to provide lifesaving and/or sustaining surgical care to injured service members at risk of succumbing to their injuries during evacuation and transportation.

In 2013, the FST was modified to enhance its capabilities, especially with regard to patient resuscitation—to create the Forward Resuscitative Surgical Team (FRST). FRSTs maintained a 20-person team, but the main modifications included the removal of a general surgeon and the two OR nurses in exchange for the addition of a second orthopaedic surgeon and two emergency room physicians. Similarly, the teams were designed to be divided into two teams with equal complements of providers. In addition to personnel changes, equipment augmentation was mandated to facilitate and enhance resuscitative and surgical capabilities. The authors of this article represent orthopaedic surgeons from the first two FRSTs to deploy with the new FRST personnel framework and equipment augmentation.

One of the first two FRSTs has completed its tour and returned stateside. Over a nine-month deployment, the two split teams treated a total of 122 traumas, 43 percent of which resulted from improvised explosive devices (IEDs) (Fig. 1) and 27 percent from gunshot wounds. At least one musculoskeletal injury was present in 64 patients (42 percent). Although most of the 64 patients were indicated for operative treatment, only 25 percent ultimately underwent surgery before evacuation to a military hospital.

Determining resource allocation, especially with regard to a single OR, is vital to the success of the mission. As such, musculoskeletal injuries without a life- or limb-threatening component were treated at the bedside with immobilization and débridement and antibiotics as indicated before transfer to a higher level of care for definitive treatment. Fracture care is also complicated in the FRST framework due to the lack of radiography, precluding complete injury evaluation (ultrasonography is the only imaging modality available).

The true value of the orthopaedic surgeon in the forward-deployed arena lies not in the provision of musculoskeletal care, but rather as a skilled assistant to the singular general surgeon carrying the burden of providing life-sustaining care. This role requires basic knowledge and understanding of instrumentation and techniques not employed since surgical internship, such as an embolectomy catheter during arterial shunting procedures. Unfortunately, since the transition in 2013 to an orthopaedic surgery-dominant internship year, newer military orthopaedic surgeons may be less facile with assisting in and performing those procedures.

Based on the new requirements of orthopaedic surgeons as part of FRSTs, there are several lessons that can be, should be, and are being addressed to ensure continued excellence in battlefield surgical care. Given the decreased exposure to and training in general surgical and vascular surgical procedures, adequate training and competency are required in certain procedures that are less frequently performed in civilian orthopaedic practice.

Fig. 1 A clinical image of a patient who sustained a near amputation of the left arm after detonation of a vehicle-borne improvised explosive device. The injury required revision forequarter amputation.
Courtesy of K. Aaron Shaw, DO, MAJ

Fig. 2 A clinical image of a patient who sustained a brachial artery laceration after a gunshot wound to the medial elbow, requiring vascular shunting with intravenous tubing.
Courtesy of K. Aaron Shaw, DO, MAJ

In order to function with high efficiency in high-stress situations, teams must acquaint themselves with their equipment and personnel. To accomplish that, each FRST undergoes various predeployment training. Among the requirements is a two-week Army Trauma Training Center Course at the Ryder Trauma Center in Miami, where members of the team not only undergo trauma training, but also have an opportunity to work together and integrate as a team before deployment. Following training, in order to preserve the skills learned, the teams constantly conduct rehearsals and drills in simulated medical situations. Not only are skills honed and refined, but teams also become more efficient in the process.

Based on lessons learned from 17 years of armed conflict and care of battlefield casualties, evidence-based clinical practice guidelines have been developed to streamline and guide providers in the management of war-specific trauma. However, military trauma is not always fully reflected within civilian trauma practices in the United States. In an attempt to bridge this gap, a predeployment training has been initiated in Honduras to provide more surgical repetition and team integration training in a resource-constrained environment. During those hands-on training exercises, orthopaedic surgeons can practice and become more facile in procedures they do not typically perform but with which they will be required to assist, such as control and management of vascular injuries.

Finally, the Army has recently implemented criteria to determine whether each medical/surgical provider is “ready” for deployment based on his or her assigned role. Referred to as individual critical task lists (ICTLs), they represent critical wartime medical readiness skills and core competencies of healthcare providers within the Armed Forces. For orthopaedic surgeons, the ICTLs include completion of the following tasks prior to deployment: perform 100 orthopaedic surgical cases, manage five fractures, perform five external fixations of fractures, perform two fasciotomies, place two vascular shunts, and débride five wounds. The efforts aim to ensure maximum preparedness of orthopaedic surgeons prior to deployment.

Those skills, especially the vascular procedures, are not common procedures performed in stateside orthopaedic practices but can be augmented with continued advances in civilian-military trauma collaboration, outside the context of predeployment training, to develop and/or maintain those mission-critical skills. Nonetheless, proper training is needed to better prepare surgeons to treat potentially life-threatening injuries using shunting techniques and approaches for proximal control.

For the civilian orthopaedic surgeon, the lessons of forward-deployed orthopaedic care translate to care provision in instances of natural or effected disasters. Be it a large-magnitude earthquake or a catastrophic manmade disaster, orthopaedic surgeons serve an important role, but a role that must be accepted within the larger focus of life preservation.

The opinions or assertions contained herein are the private views of the authors and are not to be construed as official or reflecting the views of the Department of Defense or U.S. government.