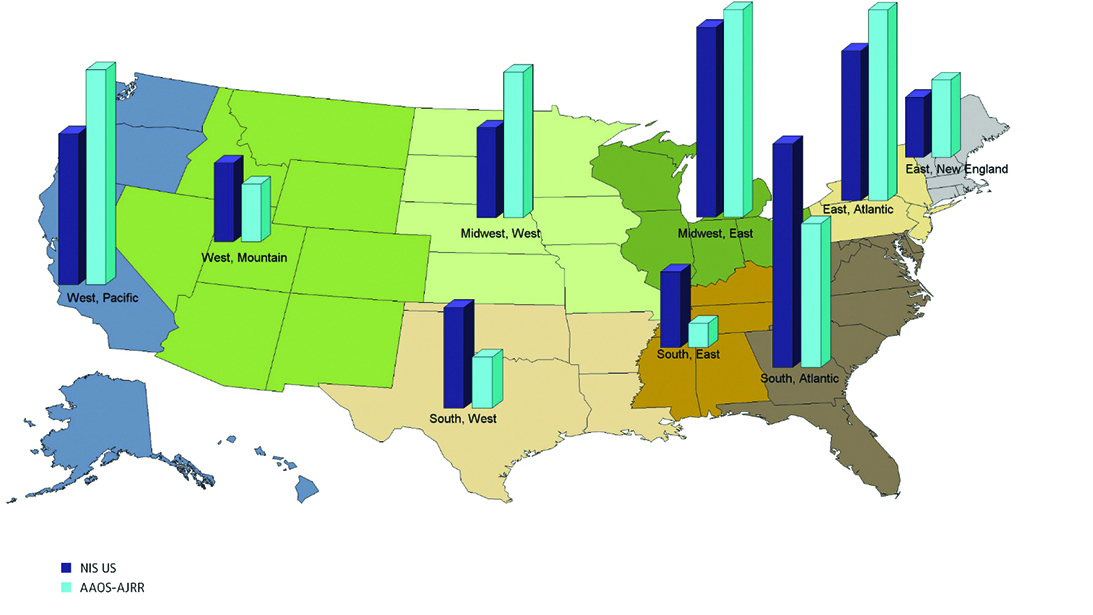 The study, on display today in Academy Hall, Sails Pavilion, and as an ePoster, covered primary TKA (NIS, 3,417,700 procedures; AJRR, 809,494) and THA (NIS, 2,316,345; AJRR, 557,684). Along with the alignment between patient demographics and hospital size, the study revealed only small differences between the databases in terms of hospital volume and geography. The authors noted that AJRR was underrepresented in Southern regions and hospitals with low procedure volume, but overrepresented in Northern hospitals and those with larger volume. Both NIS and AJRR followed a similar overall trend of most procedures being performed at hospitals with <50 cases per year.

NIS is a public database containing demographic estimates based on more than 7 million hospitalizations annually. It is the largest publicly available, all-payer, inpatient care database in the United States.

AJRR was founded in 2009 and started collecting data in 2013; it is the world’s largest national arthroplasty registry, with more than 2 million procedures of THA and TKA. It contains data from more than 1,400 medical institutions and 11,000 surgeons, representing approximately 32 percent of all hip and knee procedures performed in the United States.

However, “there is no gold standard to determine when a clinical registry is considered generalizable to the underlying population as a whole,” the authors wrote. They explained that, although AJRR is positioned as the largest orthopedic registry in the U.S., its institution-based, rather than population- based, status raises the question of whether findings are generalizable beyond participating registry institutions.

“The way in which patients are recruited, classified, and followed in AJRR is nonrandom and can introduce bias, and whether the AJRR data is representative of the national experience with THA and TKA is an important and valid question,” the researchers wrote. “Strong external validity of a registry is important when determining whether the findings can be extrapolated to actual practice.”

In this study, they explained, “the proportional differences between AJRR and the nationwide experience based on the NIS were either minimal or negligible based on Cohen’s d assessment, suggesting generalizability of the AJRR to the larger U.S. population.”

Cohen’s d assessment refers to effect size, which is a quantitative measure of the magnitude of the experimental effect. The larger the effect size, the stronger the relationship between two variables.

To externally validate these findings, the researchers compared clinical registry data with national administrative registries. Procedure coverage rates can also be used as a measure of external validity, a method used by many national arthroplasty registries. The International Society of Arthroplasty Registers (ISAR) requires inclusion of at least 80 percent of national data for full membership. “While the AJRR capture rate is increasing, the Unites States is a difficult environment for the development of a national registry due to regulatory and financial considerations as well as the reliance on voluntary reporting and data entry,” the authors wrote.

“The American Joint Replacement Registry (AJRR) currently captures approximately 40 percent of all joint replacements performed in the United States on an annual basis,” said Richard Illgen, MD, FAAOS, author and AJRR Research Projects Subcommittee chair. “This study demonstrates that the data captured by the AJRR is generalizable to the entire U.S. population. This supports the external validity of the AJRR and expanding the continued research efforts using the AJRR database through the Research Analytics Institute.”

James A. Browne, MD, FAAOS, one of the study’s authors, said, “Given the imperfect capture rate of procedures and nonrandom sample of data, it is important to know how well the AJRR dataset can be expected to apply to the U.S. population as a whole. The results of this study are clearly reassuring when it comes to the external validity of the AJRR.”

Regarding geographic distribution, a small effect size (Cohen’s d = 0.31) exists between the two comparison groups for TKA. There was less than a 1 percent difference between NIS and AJRR in the proportion of THA procedures performed in the Midwest East, Northeast Atlantic, Northeast New England, and West Mountain Census Divisions. Of the nine Census Divisions, the largest proportional difference between the two databases was only 6.4 percent, in the West Pacific.

The results of this study suggest that AJRR is representative of national trends and may be generalized to the larger U.S. population. Future studies, the authors noted, may consider inclusion of surgeon volume to better account for variability.

Mita De, PhD, is AAOS director of data science. She can be reached at de@aaos.org.