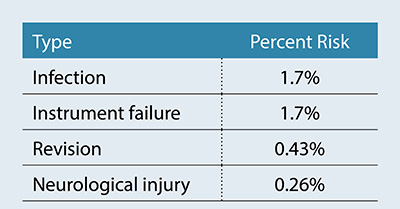 Study: 20-year Trends in Unplanned Return to the OR after Adolescent Idiopathic Scoliosis Surgery

Rates of unplanned return to the operating room (UPROR) after adolescent idiopathic scoliosis (AIS) surgery have improved significantly over the past two decades, according to a retrospective analysis of a large, prospective, multicenter database. The findings were presented on Tuesday by Nishank Mehta, MD, an orthopaedic surgery resident at Stony Brook University Hospital in Stony Brook, N.Y.

UPROR is an inclusive metric for unexpected surgery after the initial procedure. In this study, researchers retrospectively reviewed trends in UPROR rates after AIS surgery since 1995. “Given the many quality and safety improvements in AIS surgery over the past 20 years, it is useful for spine-deformity surgeons to understand the current rate of UPROR, the etiologies, and trends over time,” the authors commented.

See the Table for the rates of the most common complications that caused UPROR events.

“[Incidence of] UPROR likely rises with increased follow-up for several reasons: Techniques have improved over the past decade, complications may take time to manifest, and patients with a problem are more likely to return for follow-up,” Dr. Mehta commented.

The authors also observed an overall decrease in the rate of unexpected surgery over the study period after analyzing changes in UPROR events between three-year intervals from 1997 through 2013. Total UPROR percentages fell from around 12.0 percent in 1997–1999 to around 4.0 percent in 2012–2013. Overall rates of unexpected surgery fell by 0.46 percent per year between 1997 and 2013 (P <0.001). rates of instrument failure also decreased by an average of 0.26 percent per year during that period (>P = 0.03).

The study is limited by its reliance on a multicenter database, which “is subject to reporting and recall biases, as each site was responsible for self-reporting complications following standardized guidelines,” Dr. Mehta noted. “This may have affected our reported UPROR rates. However, he added, “Strict protocols were put in place for documenting complications, individual sites had research coordinators to review complications with surgeons, and the overseeing center performed multiple iterations of data review for quality assurance.”

In addition, although patient incentives and other efforts were made to ensure maximum patient follow-up, a large portion of patients (20.2 percent) were lost to two-year follow-up.