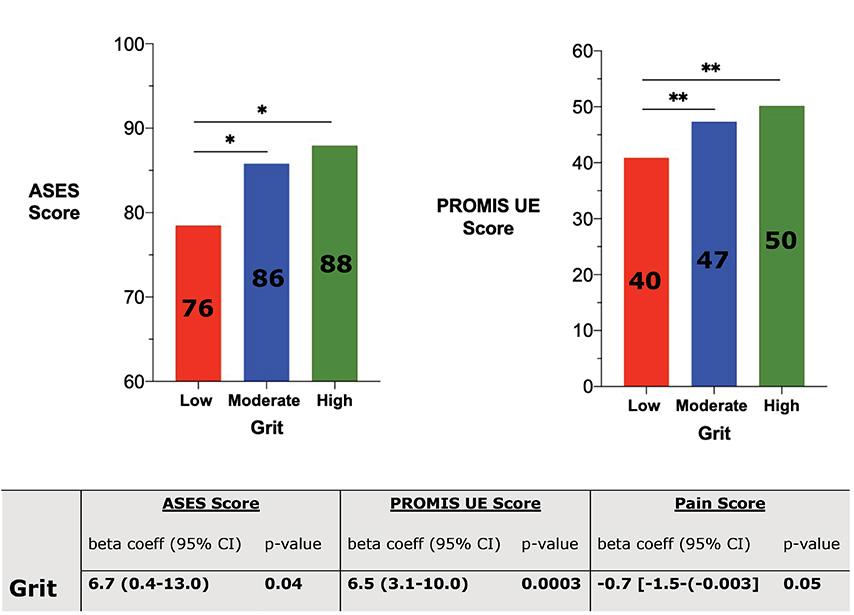 In this study, Dr. Stoll and researchers aimed to determine whether patients’ personal motivation and ability to deal with adversity affected patient-reported outcomes (PROs) following RCR.

The researchers assessed 126 patients with an average age of 63 years who underwent RCR at a single healthcare system between 2014 and 2018. Participants completed a single survey that included basic demographic information, the Short Grit Scale (Grit-S) Score, American Shoulder and Elbow Surgeons (ASES) Shoulder Score, Patient-reported Outcomes Measurement Information System–Upper Extremity (PROMIS-UE), and pain analog scale. The Grit-S consists of eight statements, such as “I often set a goal but later choose to pursue a different one,” which patients rate in agreement or disagreement with personal behavior. Scores range from 1 (low grit) to 5 (high grit).

The mean grit score was 4.0, with a range of 2.2 to 5.0. Mean ASES, PROMIS-UE, and pain scores were 87, 48, and 1.5, respectively. The investigators conducted a multivariate analysis with functional scores and pain scale as dependent variables and found an independent correlation between grit and other functional measurements. Patients with low grit had significantly lower functional scores compared to patients with moderate to high grit, even after the researchers accounted for confounding variables. See Fig. 1 for functional assessment scores according to level of patient grit.

The multivariate model found that 18 percent of the observed variation in functional scores could be explained by patients’ individual levels of grit. Dr. Stoll noted that prior studies of the impact of grit on functional outcomes found that only 4 percent of differences were due to that particular factor.

“There is increasing evidence in orthopaedics that psychosocial factors are playing a significant role in how patients do after surgery. Our study adds to this evidence. Psychosocial factors, such as grit, should be considered prior to rotator cuff repair,” Dr. Stoll said.

The study was limited by the lack of preoperative functional scores, which prevented the authors from drawing conclusions about how grit impacts PRO changes pre- and postoperatively and subsequently whether low preoperative grit should inform postoperative management. The lack of patient satisfaction measures on the administered survey also limits the implications of these findings. However, the researchers also noted wide confidence intervals that approach non-significance for ASES and pain scores, whereas PROMIS-UE scores were more “convincingly” impacted by grit.