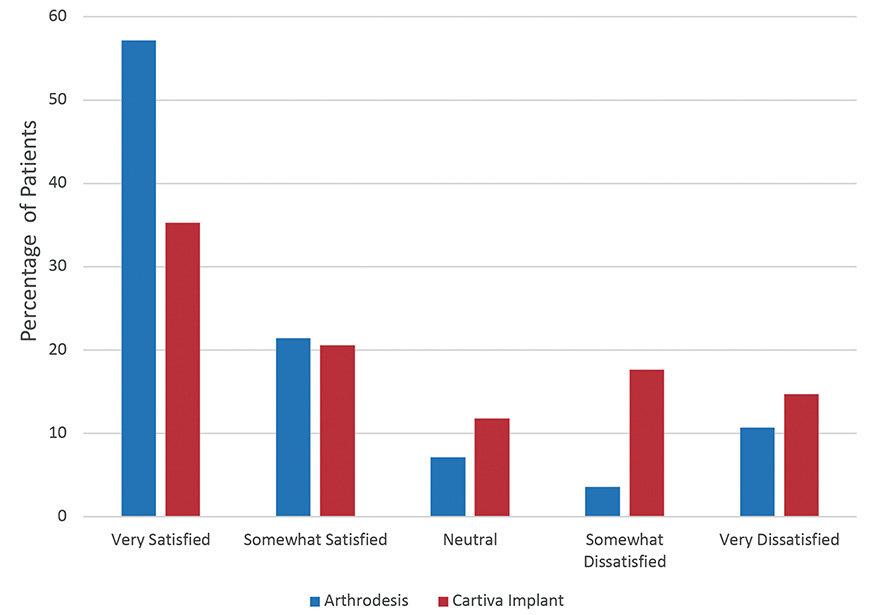 Fig. 1 Graphic display of patient satisfaction according to the five-point Likert scale of 62 patients. The remaining seven patients did not respond to the questionnaire. Seventy-eight percent of patients who received arthrodesis and 56 percent of those who received Cartiva reported being somewhat satisfied or very satisfied.
Courtesy of Muhammad Yazid Mutawakkil, MD

In a study of 69 consecutive patients treated for hallux rigidus 3 or 4 with either first metatarsophalangeal joint (MTPJ) arthrodesis or synthetic implant, investigators found that arthrodesis is more effective in decreasing pain and improving function at one year, as measured by Patient-reported Outcome Measurement Information System (PROMIS) scores.

Fig. 1 Graphic display of patient satisfaction according to the five-point Likert scale of 62 patients. The remaining seven patients did not respond to the questionnaire. Seventy-eight percent of patients who received arthrodesis and 56 percent of those who received Cartiva reported being somewhat satisfied or very satisfied.
Courtesy of Muhammad Yazid Mutawakkil, MD

Surgeries were performed at a single institution by two fellowship-trained orthopaedic foot and ankle surgeons. Only the arthrodesis group showed significant improvement in PF (P <0.01), dr. mutawakkil told>AAOS Now Daily Edition (Table 1). Arthrodesis was associated with superior improvement of PI (–12.6 ± 8.6 versus –3 ± 8.6, P <0.01) and pf (5.2>± 7.5 versus 0.74 ± 7, P = 0.048) at one year after surgery. PROMIS PF and PI t scores were strongly correlated such that decreasing levels of PI were positively associated with perceived PF capabilities in the arthrodesis group.

More reoperations occurred in the arthrodesis group. Three patients underwent removal of symptomatic hardware; another three revision surgeries were performed for nonunion, one of which was for infected nonunion. There was one peri-implant fracture that required open reduction–internal fixation within the Cartiva group.

Dr. Mutawakkil noted that few studies have directly compared patient-reported outcomes of first MTPJ arthrodesis and synthetic cartilage implant in the treatment of hallux rigidus. Cartiva is a synthetic alternate articular surface of the first metatarsal head with the aim of preserving joint motion while also reducing pain. Recent studies comparing Cartiva to arthrodesis have had mixed results in identifying a superior procedure.

Of the results of this study, he commented, “We were surprised to find that the patients who underwent first MTPJ arthrodesis reported better physical function outcomes compared to the Cartiva group at one-year follow up. We also found that more patients in the arthrodesis group were more satisfied with their outcome compared to the Cartiva group.” Another surprise, he said, was that more reoperations were seen in the arthrodesis group for the indications mentioned.

The authors wrote that, to their knowledge, this study is the first to report comparative outcomes of first MTPJ arthrodesis and synthetic cartilage implant (Cartiva) using PROMIS CATs PF and PI. “This assessment tool demonstrates that arthrodesis is the superior option from the patients’ perspective and experience,” they wrote. “These findings are consistent with previous studies, thus adding to the perpetual debate on the optimal operative treatment for hallux rigidus.”

Dr. Mutawakkil said the clinical takeaway from the findings is that, “despite our efforts to offer patients joint-sparing alternatives in the treatment of mild to moderate hallux rigidus, our data suggest that some patients may see better functional outcome and higher satisfaction with first MTPJ arthrodesis.”

In his practice experience, he said, “We have seen patients report persistent pain that interferes with their daily function. Some of these patients required further treatments. This led our senior author (Anish Raj Kadakia, MD) to significantly decrease the number of Cartiva treatments he recommends to patients with moderate hallux rigidus.”

Dr. Mutawakkil said this study points to a need for “further assessment of the ideal treatment of moderate hallux rigidus, with a larger sample, longer follow-up, and refined PROMIS assessment being necessary to obtain conclusive results in the future.”

In addition to the study being potentially limited by its single-center design, Dr. Mutawakkil said “the nonrandomized method of the operative treatments provides room for possible selection bias.” There also were limited response rates or missing data at the six-month follow-up period, decreasing the strength of the findings. To avoid recall bias, the authors did not attempt to retrospectively collect the data for the missing time points. All patients had responses at one-year follow-up, which was the main endpoint for the inquiry. Last, he said, computer-based surveys inherently have some challenges, including patients’ technological literacy, their willingness to participate in answering all items diligently, and responder fatigue. “Despite these limitations, the study provides us with comprehensive data to compare the two operative treatments for hallux rigidus from the patients’ own perspective,” Dr. Mutawakkil said.