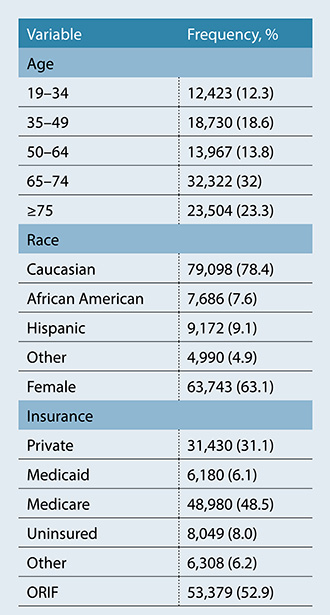 A study analyzing the use of open reduction and internal fixation (ORIF) for closed humeral shaft fractures found that surgical intervention for these injuries was less common among patients who were nonwhite and were without private insurance. 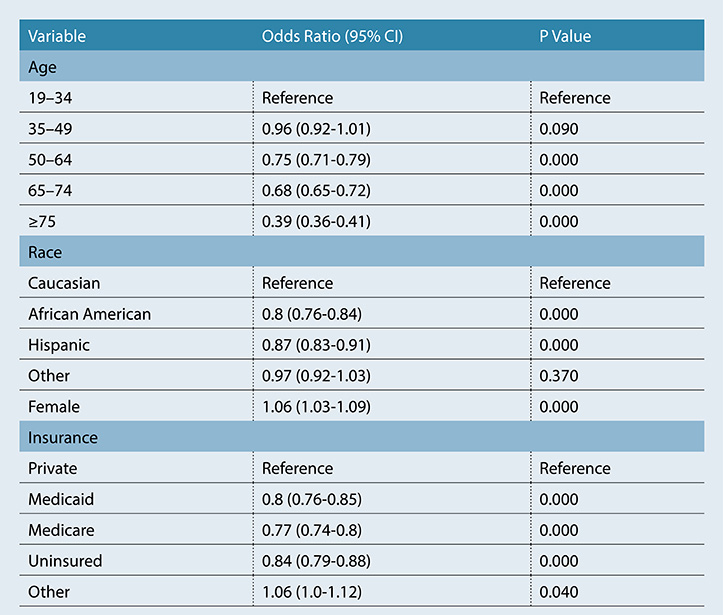 Of the 100,947 patients in the database with closed humeral shaft fractures, 53,379 (52.9 percent) underwent surgical fixation with ORIF (Table 1). Patients with Medicare or Medicaid and those without insurance had significantly lower likelihood of undergoing ORIF compared with those who had private insurance (P <0.001); (table 2). black and hispanic patients were also less likely to receive surgery (>P <0.001) compared to white patients. use of orif increased over time, from 40.8 percent in 2001 to 56.5 percent in 2013 (>P <0.001). “that is not unusual and is consistent with current literature indicating increased rates of orif,” dr. amer told>AAOS Now Daily Edition.

“Identifying socioeconomic factors that affect clinical decision-making is imperative to improving patient care,” he said. “Elements such as insurance status, income, and demographics have an important role to play in optimizing outcomes but may be overlooked in some settings. By identifying areas of differences in healthcare utilization, clinicians and policymakers can target efforts and research to minimize discrepancies.” More importantly, surgical fixation of humeral shaft fractures is not the standard of care and may come with complications, including non-union and iatrogenic radial nerve palsy. Also, many surgeons are not keen on offering surgery for this patient population.

He noted that, in addition to the finding that uninsured people or those with Medicaid or Medicare had a decreased likelihood of undergoing surgery for humeral shaft fractures, the analysis demonstrated that those in lower income quartiles were less likely to undergo surgery compared to those in the highest quartile.

Interpreting the results, Dr. Amer commented, “Many factors play into the decision-making process for operative intervention, and no one variable can provide a clear picture as to why differences exist. However, these findings are surprising and should prompt further investigation.”

The clinical takeaway from the study, he said, is that physicians “should advocate for their patients and consider socioeconomic factors that may guide clinical decisions.”

He said the study has several important limitations, including that the NIS “captures only 20 percent of the population and uses statistical modifiers to provide national projections,” therefore may not be generalizable to the entire population. Although the NIS is a validated tool that provides data on a national scale, it “does not provide data on specific fracture characteristics such as fracture pattern, degree of displacement, and classification.”

He also noted that the NIS captures only inpatient data and does not include patients who present or follow-up at outpatient facilities. “Though our results may not be generalizable to the outpatient population, private insurance is the most expected payment source among this population, and their inclusion into this study would have significantly inflated the rate of surgery amongst those patients, widening the gap even more,” Dr. Amer said.

Finally, he said, this study did not explore the relationship between surgery clinical outcomes. “Therefore, we could not determine if patients who were nonwhite and without private insurance had inferior results with nonoperative treatment compared to the operative fixation group,” Dr. Amer concluded.