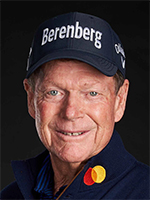 Tom Watson is one of the most successful and enduring professional golfers in the history of the sport. In 2009, nearing his 60th birthday, he led the British Open much of the way before losing in a playoff. It was the feel-good sports story of the year, and will be talked about for as long as games are played and reported. That stunning performance led to a revised British Open age limit that exempts Watson for at least five more years at the world's oldest major championship, a tournament he's won five times among his eight PGA Tour majors. In total, Watson has won 39 times on the PGA Tour; six times he was PGA Player of the Year and five times the leading money winner. Playing mostly on the over-50 Champions Tour now, he has won 13 more times there including five senior majors.

Watson was born in 1949 in Kansas City, Missouri, and has stayed true to the Midwest's solid values. Today, he lives on a farm outside Kansas City, and can be found doing chores and riding his wife's cutting horses when he's not on tour (he admits to falling off a horse only twice). His father Ray, a long time scratch player, introduced him to golf at age 6. A young Tom soon developed into a state amateur champion at age 17, and went on to play for Stanford University, earning a degree in psychology in 1971. He joined the PGA Tour that same year and won his first tournament, the Western Open, in 1974. Learning to overcome defeat at an early age, Watson lost the lead at the 1974 and 1975 U.S. Opens, but learned from his struggles and broke-through in 1977 where he won both the Masters and the British Open.

Throughout his career, Watson has been a respected sportsman and spokesman for the sport. A role model marked by grit, class and true grace under pressure, he received the U.S. Golf Association's prestigious Bob Jones Award for distinguished sportsmanship in 1987 and was elected to the PGA World Golf Hall of Fame the following year. In addition, Watson won

Watson has a strong work and practice ethic and has admitted to hitting a "million practice balls" in order to continue honing his game. He's considered one of the best foul weather players in the game, giving credit to his growing up in Kansas City, playing and practicing in the winter ice and snow. Following his 2008 hip replacement and 2009 performance at the British Open at age 59, Watson is considered a hero to Baby Boomers who want to stay active in "the game of a lifetime." Top teachers and players believe he's swinging the club better today than he was in his prime.

Tom constantly gives credit for his success to the people who helped him throughout his life and career. In his early years his dad and Stan Thirsk built the foundation for his swing with a solid no-nonsense approach which served him well and from which his game blossomed. This combination of mentors and a hard work ethic has been the key to a long and still continuing career.

From the podium Watson shares his inspiring stories of preparation, determination and succeeding in the face of overwhelming odds - both on and off the course.

Plan Ahead With Us!

Registration for the AAOS 2023 Annual Meeting, March 7 - 11 in Las Vegas will open on November 9. We invite you to plan along with us by reserving your hotel room with the official hotel provider, onPeak. Please check back frequently for updates!